Is investigative journalism dead in the West? 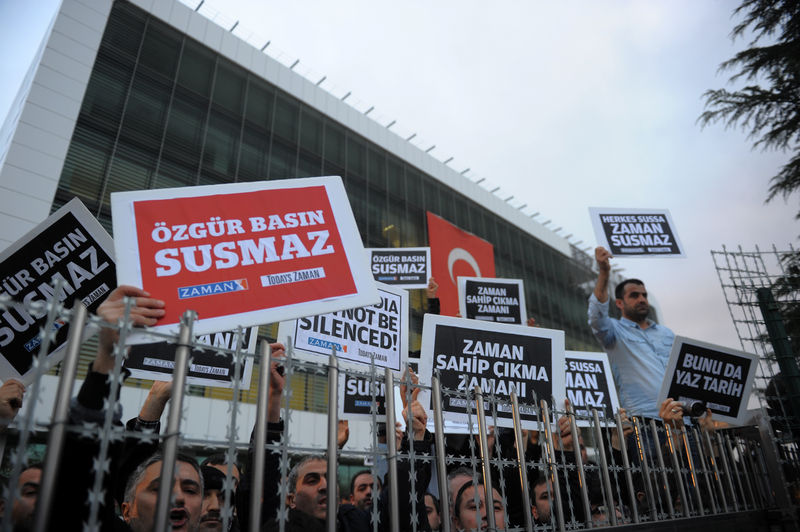 by Serdar Karagöz Dec 23, 2014 12:00 am
Prosecutors in Turkey initiated an investigation based on the 2010 Tahşiye case. According to allegations, a group called the Gülen Movement infiltrated the judiciary and police to jail anyone and everyone they perceived as a threat to their interests. Gülenist media organs were part of this illegal organization. Gülenists countered the prosecutors' allegations with their own claims. They argued that Gülen Movement-affiliated journalists, who were openly opposed to the ruling Justice and Development Party (AK Party), were unfairly targeted. There are two assertions and one of them needs to be the truth. Still, Western editors and journalists opted to believe what Gülenists had to say.

The truth will come out at the end of the trial. However, one needs to make a pessimistic observation concerning the state of journalism.

The Western media's propensity to be influenced by Gülenist PR and propaganda experts and consequently accept Gülenist claims as facts showed that investigative journalism in the West is finished. Let's look at the details of the matter largely ignored by the Western media.

On Dec. 12, two days before the suspects in the Tahşiye case were detained, Gülenist social media experts used the Twitter handle @fuatavni to announce the preparations for a huge operation involving the arrest of journalists in Turkey. This is something an investigative journalist needs to analyze. Gülenists have infiltrated the judiciary and the police so deeply that they know about the legal and administrative steps beforehand and initiate their disinformation campaign accordingly.

Gülenist propaganda experts also used the same account to announce the number of arrests. Their social media team claimed 150 journalists would be arrested. Even before the prosecutors and the police initiated the operation, a PR firm had already designed a placard that said "free media cannot be silenced." Hundreds of Gülenists were waiting with the placards in hand wherever the police arrived to detain the suspects.

Gülen Movement-affiliated newspapers, television channels, websites and social media accounts were also dotted with the same professionally designed logo. They made prominent foreign officials, parliamentarians, journalists and academicians pose with the same placards. On Dec. 14, prosecutors invited suspects for questioning. Journalist Ekrem Dumanlı, holding the highest executive position in Gülenist media, rejected the invitation. In the Turkish legal system, this means the suspect needs to be detained by the police and taken to the prosecutor's office. Dumanlı purposefully made sure that police officers detained him at his office in front of live cameras. Gülenists promoted this as a "police raid on our newspaper building." The Western media once again chose to ignore the details and bought into Gülenist propaganda.

Following the interrogations, the prosecutor sent some of the suspects to court for their arrest. The court decided to arrest four and release the rest pending their trial. One should recognize the fact that none of those arrested are journalist. In other words, contrary to the deception swallowed by Western journalists and the European Parliament, no journalist was arrested. Despite this simple fact, Western media insisted on feeding the same old story of "journalists jailed." The court determined that those arrested had formed a criminal organization. It also decided to issue an arrest warrant for Fethullah Gülen, the leader of this criminal and terrorist organization.

I admit the matter is complicated. When coupled with Gülenist disinformation, it is truly hard to comprehend what's going on. I would like to present a list of what is happening and the accusations made to make crystal clear what Turkey is facing.

- The Tahşiye group, with Mehmet Doğan as its leader, are known for their opposition to the religious ideology of the movement founded by Fethullah Gülen.

- According to allegations, Gülen ordered his operatives within the judiciary and the police to punish Doğan for his opposition.

- Using Gülenist media organs, Doğan was portrayed as an al-Qaida member. The police launched a probe into the al-Qaida claims. Falsified evidence was used to imprison Doğan and his followers for 17 months.

- Doğan was finally released, being told he was innocent. He lodged a complaint at the prosecutor's office, arguing that his imprisonment for 17 months based on false evidence was a plot.

- Independent prosecutors investigated the claims made in the complaint and found that there were grievous infringements of human rights and on Dec. 14 launched the legal operation against the criminal group responsible for the plot.

- The court decided to arrest four people and issued an arrest warrant for Fethullah Gülen, who was the decision-maker of the illegal group.

- The Gülen Movement, which is promoting itself under the guise of interfaith dialogue and using cultural interaction to gain access to many people in the West, is involved in an illegal organization within the Turkish state.

- Gülenists on Dec. 14 faced the court based on charges stemming solely from the Tahşiye case. This may be the beginning of the end. The movement's members may face many other charges stemming from the crimes they perpetrated by infiltrating state institutions.

This is the brief summary of what has happened. The accuracy of the allegations will become apparent at the end of the trial.

While this is the state of affairs in Turkey, the Western media chooses to portray the matter as an attempt to silence the media based on the disinformation campaign waged by Gülenists.

I recommend all journalism students across the world to examine the "Tahşiye Trial" as a case study. A workshop on "How the Tahşiye case in Turkey was reflected in the U.S. and European media" would do plenty of good for their careers. They should study how the matter was portrayed in the Western media and analyze the choices made by editors. They should analyze the content of the news articles. Only then can they reach the same conclusion as I and realize that lazy journalists, who are ready to be force fed all the "facts" and accept to be pawns of a criminal organization, are one of the reasons why "investigative journalism" in the West is dead.