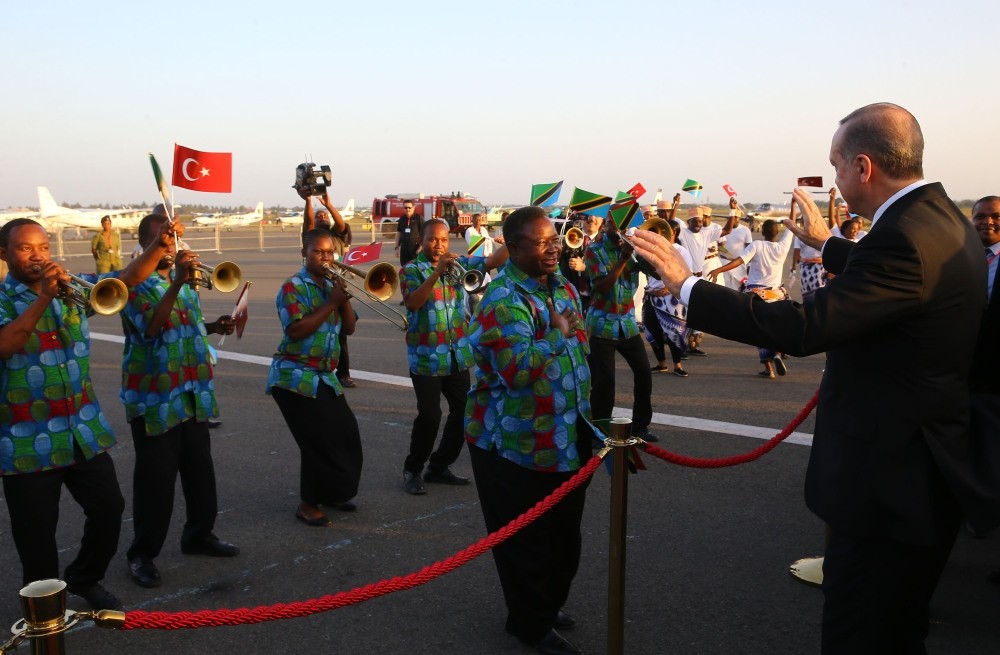 Turkey's visit to the African continent, unlike those by the colonial powers, is aimed at strengthening bilateral ties, increasing business and trade cooperation and supporting stability of the African countries

Turkey's multi-dimensional foreign policy strategy that has been developing over the past 15 years has always allocated a very prominent place to the continent of Africa. President Recep Tayyip Erdoğan has visited almost every country during his tenure first as the head of the government and now the head of state. He visited many countries several times. In some places weak bilateral relations were strengthened, in others where no official links existed, he established the first Turkish presence.

And now, a Turkish delegation led by President Erdoğan is currently on an official tour of Tanzania, Mozambique and Madagascar. The motivation behind this trip is to further strengthen mutual economic relations, accelerate Africa's development and encourage Turkish and African businessmen to launch joint commercial projects. One added incentive behind these visits is to warn friendly African countries about the enormous danger posed by the Gülenist Terror Group (FETÖ) run by the treacherous and shadowy fugitive imam driven from Turkey and now based in Pennsylvania.

Independent from the content of this visit, the timing alone is an important message to those who closely follow developments in Turkey. Turkey is going through one of the most significant periods in its modern history. At a time when the system of governance is being reformed, political tension in the country is escalating. At the same time, there is an intense battle taking place against the PKK, Revolutionary People's Liberation Party-Front (DHKP-C) and Daesh terrorist groups steered by foreign intelligence services.

Additionally, speculators are currently engaged in a full-on attack on the Turkish lira, causing significant volatility that has no basis in the country's economic fundamentals.

Turkey is also fighting against terrorism abroad. Without any tangible support from the international coalition, it has launched a cross-border operation in Syria against Daesh.

It has single-handedly been carrying the economic and social burden of the refugees fleeing Syria and Iraq due to the EU's failure to keep the promises it made.

No one should forget about the failed military coup on July 15, 2016, and the subsequent extensive judicial and security process underway to eliminate all FETÖ presence within state institutions.

These problems are not of Turkey's making, but mostly the consequences of, deliberate or not, grievous mistakes committed by other countries. Every one of these problems, from the July 15 coup attempt to the speculators, from Daesh militants recruited in Western countries to refugees fleeing from violence, can be traced to an outside source.

Notwithstanding the enormous pressure it is under, Turkey is determined not to swerve from its objectives. Any one of these intense trials Turkey is faced with would cripple the economies and the politics of most countries. However, Turkey's dynamism precludes any halt in its efforts to find new avenues of cooperation and mutual development.

This is exactly why a Turkish delegation is currently embarking on a three-nation tour of Africa to develop ties and seek opportunities of cooperation. This trip alone is a significant message to those who would like to lay Turkey low. It is a message of defiance and determination to demonstrate that the new Turkey will never cut itself off from the world nor accept being cast away.

Turkey, through investing in the already vast soft power at its disposal, prizes the businessmen who bring dynamism to its foreign policy by encouraging them to leave no stone unturned. Turkey's developing ties to African countries exemplifies this outreach.

Thanks to President Erdoğan's visit to Tanzania, Mozambique and Madagascar, Turkish businessmen accompanying him now have to opportunity to show how they can contribute to these countries' development.

No one can dispute the fact that the current trade volume between Turkey and these three countries are infinitesimal and that their current level of purchasing power is low, but Turkey is investing in their future.

Going beyond the narrow confines of seeing other countries simply as potential markets to be exploited, Turkey is supporting the stability of these African countries, sharing its own development strategies that proved useful in the past. The fruits of today's engagement will be enjoyed tomorrow by both sides.

Africans, understanding Turkey's gestures for their respectful nature, graciously open their doors and know that maintaining close ties will be beneficial. What we see here is more than just economic advantages, but of a long-term friendship, which Africans gladly welcome.

No wonder the former colonial powers and the East Asian capital trying to exploit human and natural resources of the continent look at Turkey with jealousy as it builds a common future in Africa.
RELATED TOPICS