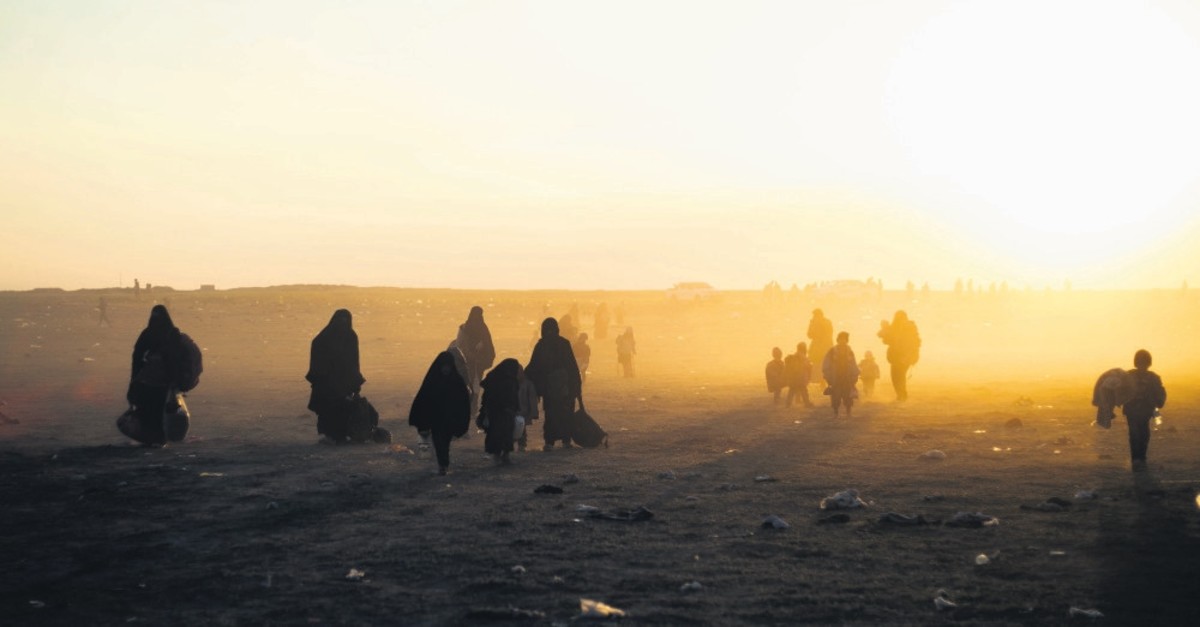 Women and children evacuated from Daesh-held territories arrive in the eastern Syrian province of Deir ez-Zor, March 6, 2019.
by Talha Köse Mar 08, 2019 12:59 am

Turkish and American officials are actively working to coordinate the status of eastern Syria after the withdrawal of American troops. President Donald Trump previously announced the complete withdrawal of U.S. troops from Syria. The decision was revised to a partial withdrawal, and it may be altered again or postponed if the related parties cannot coordinate their objectives and ambitions. The Russian side does not believe that the Americans will withdraw from Syria. The Europeans are also following Washington's decision closely. Washington wants to keep some European presence in Syria, but the French may also withdraw from Syria after the American withdrawal.

This week James Jeffrey, U.S. envoy for Syria and special representative for the anti-Daesh coalition, visited Ankara to discuss how the withdrawal should be coordinated between the two sides. This was Jeffrey's second visit to Ankara in a month. While the parties achieved some progress in the meetings, including some technical issues, they still could not reach a holistic deal concerning the governing structure after the American withdrawal. The issue of how the People's Protection Units (YPG) should be managed after the withdrawal is still a matter of controversy between the two parties. Turkey's purchase of the S-400 missile system from Russia further complicates relations between the Turkish-American sides. Though the S-400 deal is not a new development, the Pentagon has tried to pressure Turkey on the S-400 issue. President Erdoğan already mentioned that the purchase of the S-400 missiles from Russia is a done deal. The Pentagon's efforts concerning S-400 missiles and other controversial issues with Turkey are interpreted as trying to spoil the normalization process with Ankara.

Washington is getting ready to exclude Turkey, along with India, from the Generalized System of Preferences (GSP), a preferential trade program for developing nations. American officials declared that Turkey would be excluded because Turkey is sufficiently developed, but everyone in Turkey believes that this is meant to further pressure Turkey to prevent Ankara from acting independently in security-related issues.

Some groups in Washington actively lobby against normalization of Turkish-American relations in diplomacy and military affairs. While Ankara is willing to work with Washington on the Syria issue, Ankara does not want to rely entirely on Washington on security issues due to disappointments experienced in the last several years. Washington's attempts to use various aggressive bargaining techniques and to pressures Turkey further increase Ankara's skepticism of the U.S. Those attempts are likely to backfire if Washington expects to keep Ankara in its orbit.

The governing structure and security apparatus in Manbij will be the first round of the discussions between Turkish and American officials. The model that will be developed and implemented in Manbij may be extended to the rest of eastern Syria. There are still significant disagreements between Turkey and the U.S. over how the governing structure in Manbij and the rest of eastern Syria should be shaped, especially concerning how YPG militants will be dealt with after the withdrawal is controversial and a matter of concern for both parties.

Turkey wants a complete withdrawal of YPG militants from all of eastern Syria. The American side believes that the governing model and the security apparatus formed by the YPG and Democratic Union Party (PYD) is a useful model and should be maintained in areas where Kurds live. Ankara considers this option unacceptable. Ankara wants the moderate opposition led by the Free Syrian Army (FSA) and wants armed units authorized by local councils to take more responsibility instead of the YPG. Demographic engineering and the radicalization sponsored by the YPG along its southern border is a matter of concern for Ankara.

Russia and the Syrian regime have also proposed some options to the YPG after the American withdrawal. It seems that the Russian side is trying to mediate between the Syrian regime and the YPG. Russia is trying to co-opt the YPG to the side of the regime after the American withdrawal. The regime in Damascus is distant from the idea of broader autonomy to Kurds and the PYD. Even the Syrian regime and the Russian side have differences of opinion about the YPG. Both Washington and Moscow want a decentralized Syria and broader local autonomy in eastern Syria where they have broader influence over the YPG.Russia aims to normalize Syria as a stable state with a centralized army but supports the idea of a federal government in eastern Syria. The American side wants a weak and decentralized Syria that may not have broader regional ambitions. Washington's main concern in Syria is related to Iranian influence over the regime. A weak and decentralized Syrian state will be more vulnerable to the influence of Iranian-backed militia groups and Hezbollah. Turkey and the Syrian regime both support the idea of a centralized government and centralized security apparatus. Turkey, however, wants the Syrian state and security apparatus to be more inclusive and less oppressive toward its citizens.

There are many disagreements between the influential actors in Syria about the governing structure and security arrangements for the eastern, especially the northeastern, part of the country. Iran and Israel are the other actors that may have the potential to spoil political deals in Syria. These controversies will continue for a while, but Ankara's patience with the YPG is waning.