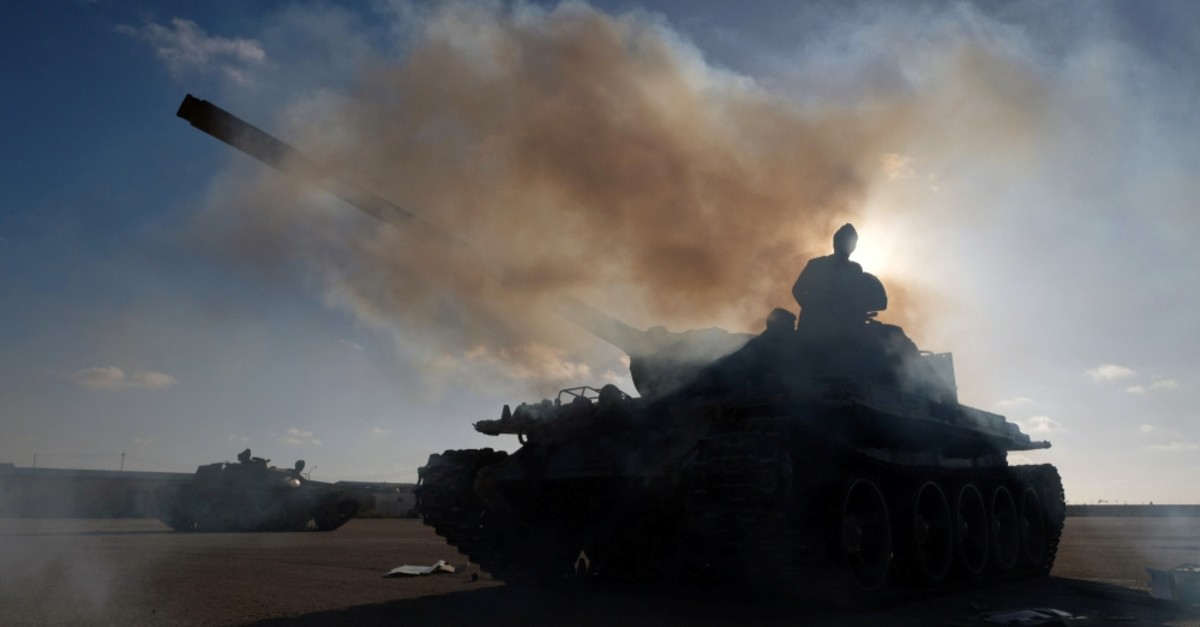 Members of the Libyan National Army (LNA), commanded by Khalifa Haftar, get ready before heading out of Benghazi to reinforce troops advancing to Tripoli, in Benghazi, Libya, April 13, 2019.
by Talha Köse Apr 20, 2019 2:08 am

Libya's civil war has devastated the country for the last five years and is escalating again with Field Marshal Khalifa Haftar's recent march to western Libya. The resource-rich country is the focus of both regional countries and European powers. The U.N.-recognized unity government of Prime Minister Fayez al-Sarraj and the militia loyal to the unity government currently control the western part of Libya. Haftar's Libyan National Army (LNA) is sponsored by France, Russia, Saudi Arabia, Egypt and the United Arab Emirates (UAE). Haftar forces faced stiff resistance by troops loyal to the unity government near the country's capital Tripoli and they hesitated.

The irony is that Haftar started his march just after U.N. Secretary-General Antonio Guterres was in town to organize a long-delayed peace conference. Armed units loyal to Haftar began their attack even before Guterres reached his next destination. Haftar and his supporters also insulted the U.N. with such an irresponsible move. Tribal militias and Madkhali Salafis sponsored by the Saudi Arabia and the UAE were also fighting together with Haftar's forces against Libya's legitimate government. The U.N. and important international actors called the parties to a cease-fire and a political dialogue after Haftar's unsuccessful initiative, but no specific condemnation was mentioned against the reckless escalation of the situation in Libya. It seems that Haftar was given the green light by his international supporters to take control of the country, but he failed in his mission. For the international interventionists, it would be a miscalculation to consider a victory in Libya as an easy and a quick task. Libya has complicated internal dynamics, and the Libyan people are fed up with authoritarian governments and strongman rule.

Problems with the formula

The formula of suppressing "extremists" and migration flows with the help of a designated strongman as ruler is a very risky option for Libya and elsewhere in the region. Such a possibility can only work temporarily to suppress the weak and unorganized opposition groups in the short run. The option of an externally sponsored strongman led to massive destruction in Syria, Iraq and Yemen. It is likely to fail in other places as well if those strongmen cannot find popular support and mobilize domestic resources to stabilize their country.

One of the significant reasons behind the spread of violent extremism in Libya, and in most Middle East and North African countries, was the history of authoritarian legacies. Moammar Gadhafi's legacy led to social, political and economic grievances among the Libyan population. The current quagmire in the region and the failed states are the consequence of earlier strongmen who used to have positive relations with some Western leaders. This formula may end up causing much deeper problems in the long run and may postpone the process of bottom-up institutionalization, which can bring about more comprehensive peace and order.

In Libya, the option of a strongman like Haftar may not help address the underlying causes behind violent extremism and political fragility. The strongman may be successful in suppressing opposition groups and may bring some stability with the support of international actors, but such a formula may increase the vulnerability of Libyan society to violent extremism. International sponsors of the strongman may inject some financial resources to make local communities feel economically comfortable in the short term, but such a dependency may further close the channels for the local people's expectations. Since the legitimacy of those externally sponsored strongmen will depend on the recognition of foreign actors, they will further distance themselves from the expectations of the local populations. Within the time those dictators or strongmen will lose their social and political credibility and run out of resources leaving behind a system much weaker and much vulnerable than before. Their sponsors may be more demanding after the weakening of those strong men. If they fail to please their patrons, there are always other strongmen that may fill the gap, but they can only function temporarily.

The strongman option is not a solution to the crises facing Libya, Sudan, Algeria and elsewhere. Only a bottom-up approach that may build consensus among the local populations can bring sustainable order. This may be a more challenging option, but the people in the region are ready to try for such an option after the decades-long legacy of dictatorship. Any solution that puts the expectations of the local people into second or third place is doomed to fail. It is the responsibility of the U.N. and other moderate international actors, to initiate a political process and a comprehensive national dialogue which would include local actors and stakeholders and to limit the destructive influence of international actors. Local actors that work for the agenda of regional actors will lose their credibility in the medium term, and they may face a backlash.

Libyan society has enough common ground and sense of belonging to work for their shared future, but their legacy is interrupted by external powers. International actors that are actively involved in Libya should also recognize that there will be no military solution to the crisis in Libya. International diplomacy is key to finding common ground to move Libya toward a more stable direction. Whoever has better local standing in Libya with a better understanding of the desires and expectations of the Libyan people in the economic, political and social spheres may play a more influential role in bringing the country closer to a better future.