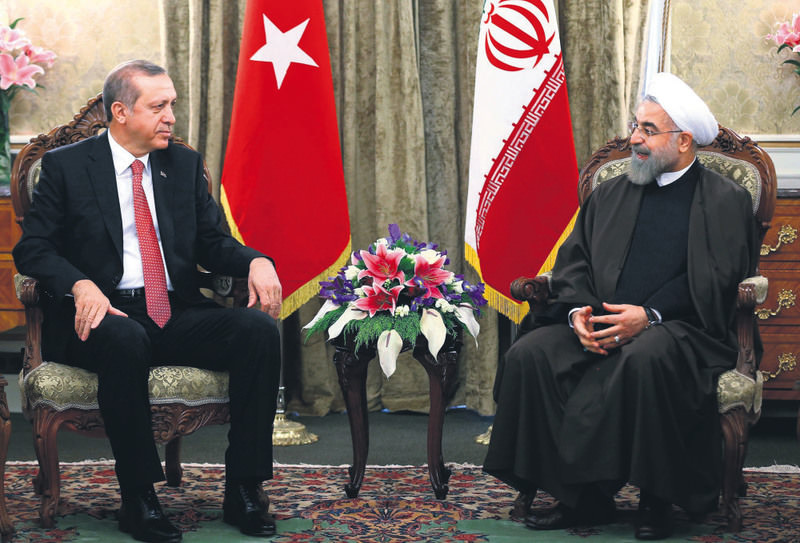 The perception of Iran in foreign policy, particularly in the last couple of years, has evolved, as the country has finally come to understand that normalizing its relations with the West is the best option

President Recep Tayyip Erdoğan has gone to Tehran on an official visit to meet with Iranian President Hassan Rohani. The visit, which was initially planned for two days, was reduced to a one-day working visit after Erdoğan's recent lambasting of Iran. Still, the fact that Iranian authorities reacted only mildly and at a lower political level bears witness to their will to minimize the tension between the two countries. Erdoğan met Supreme Leader Ayatollah Ali Khamanei, the paramount ruler of the Islamic republic. No less than eight different trade agreements were signed and a joint press meeting was organized with the two presidents.

The press conference went smoothly with Erdoğan declaring that the situation in the Middle East has gone beyond the limits of sectarian divides and that he "did not care either about the Shiites or the Sunnis," but that he is extremely concerned by the bloodshed, which must be stopped as quickly as possible.

Iranian officials did not depart from their traditional diplomatic stance throughout the visit. The fact that Erdoğan had a meeting in Ankara with the Saudi Crown Prince Muqrin al-Abdulaziz just before leaving for Tehran also gives an indication about possible indirect negotiations taking place between the Saudis and Iranians. Clearly, Turkey is not playing the role of intermediary between Saudi Arabia and Iran, but it is becoming more and more visible that three poles of influence are emerging in the region: Turkey, Iran and Saudi Arabia. Egypt is mostly out of the game because of their immense economic failure and their dependency on Saudi finances since the coup that ousted the elected President Mohammed Morsi and the phony elections that took Abdel-Fattah el-Sissi to the presidency.

Iran and Saudi Arabia are fighting each other via proxy conflicts and different actors. Turkey has succeeded up until now to remain out of the conflict in spite of the fact that a 900-kilometer common border has virtually placed Turkey within the war in Syria. Two-million refugees and a huge security problem do not allow Turkey to remain neutral to the turmoil in the Middle East.

Iran is the big player whose perspective is being deeply altered. Stuck in the situation of a being a pariah state, Iran has at last come to the understanding that normalization is a much better option. The P5+1 negotiations have opened a wide window of opportunity for the Islamic republic. This will also create a virtuous dynamic with Turkey, whose economic relations and trading web in the region are being severed one after the other due to war.

As a matter of fact, Turkey and Iran are much more closely interdependent than they might appear. However, the fact that they have very different regimes and centuries-old competition means that they will not become much closer partners than they are now. Erdoğan's claims to lower the natural gas price have been a succinct demonstration of the problems that lie ahead.

On a more general note, let us underline the basic fact that neither Iran nor Saudi Arabia can become role models for this part of the world. Some are keen to see Iran as a better regional player than Turkey to establish closer ties with Western democracies, the U.S. and export stability to its neighborhood. The Iranian regime is anything but the contrary of what analysts want to see in the wake of Geneva negotiations. Realpolitik is one thing, and definitely a normalizing Iran is a valuable asset for peace in the region. However, the example of Turkey trying to normalize President Bashar Assad's Syria is an eloquent example of how authoritarian or totalitarian regimes put up immense resistance to change. It is perhaps worth remembering this salient fact before awarding Iran a medal for the "best Western ally candidate in the region."
RELATED TOPICS