The operation against Gülenists through the eyes of a journalist 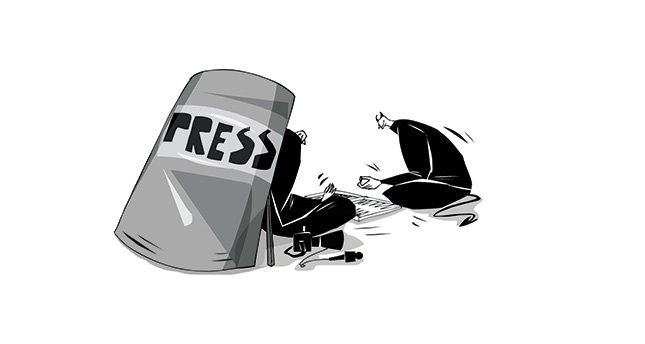 by Yahya Bostan Dec 18, 2014 12:00 am
Early morning on Sunday Dec. 14, 2014, an operation was launched against Gülenists who were known as part of the "parallel structure" in Turkey. A total of 27 people were detained during the operation, including executives of Gülenist media outlets like the editor-in-chief of the Zaman daily, Ekrem Dumanlı, and Samanyolu Media Group President Hidayet Karaca. While detainees were giving their testimonies, the prosecutor conducting the investigation released a number of people.

While I was watching these developments unfold on Sunday morning, my phone rang. The caller was my editor at Daily Sabah, asking me to write a piece on the operation. At first, I hesitated because there is bad blood between the Gülen community and journalists, and I am among those targeted by the group.

I have previously learned from news published in national newspapers that police officers linked to the Gülen community had wiretapped my phones and had attempted to connect me and many other journalists to criminal organizations. Newspaper reports claimed that the police had illegally wiretapped thousands of people, and my name was on the list. But this was just superficial information. When Gülenist journalist Mehmet Baransu made threats on Twitter saying, "Seven journalists from Sabah daily will be detained," I did not take it seriously. After all, I have not committed any crime. I thought that those old days in Turkey had been left behind and that no journalist would be arrested due to false evidence.

When I visited a prosecutor three weeks ago, I learned the hair-raising details of a plot that these now-detained police officers had tried to lay. The prosecutor laid before me 38 tape recordings, all containing telephone conversations with my news sources, but no element of crime whatsoever. But these conversations had been wiretapped and taped as if they recorded elements of a crime. The prosecutor investigating the illegal wiretapping cases told me: "You had a narrow escape. They would also have arrested you based on unfounded charges, just as they have done to many others."

I had a close call, but some colleagues have paid a heavy price in the past. Ahmet Şık, a journalist and author of a book entitled "İmam'ın Ordusu (The İmam's Army)," which exposed the internal structure of the Fethullah Gülen community, was arrested in 2011. Draft copies of the book were confiscated. Journalist Nedim Şener, who pointed to the role of Gülenist police officers in the assassination of Turkish-Armenian journalist Hrant Dink, suffered the same fate as Şık. These journalists have been unjustly imprisoned, and when they were arrested, the Zaman daily, whose editor-in-chief Ekrem Dumanlı was detained over the weekend, defended these arrests, running headlines such as: "There is hard evidence that cannot be revealed," "They were not arrested for journalism," and "Is this journalism?" In a piece on the issue, Dumanlı wrote, "When there are practices that cannot be considered as journalistic activities, journalism should not be allowed to become a shield. In this country, not everyone with the title of journalist is a real journalist; not every journalist seeks news," thus forming a premature judgment and defending the arrest of the journalists.

Because of all these events, I hesitated when my editor asked me, "Can you write a piece?" I feared my inability to approach the subject objectively. I was worried that I might mislead readers. But my hesitation was short-lived because I decided to convey what had happened from my own perspective, without any pretense of objectivity, thus not hiding anything. This is why I accepted the offer.

Let's examine the reasons for the Dec. 14 operation now, setting aside everything else. This operation was launched after discrepancies emerged during the investigation of a former operation against a religious group in Turkey, carried out by Gülen-linked police forces. There is a small religious group called "Tahşiyeciler" by Gülenists, an offshoot of the Nurcu movement, just like Gülenists. This group is known for their harsh criticism of Fethullah Gülen. They also make some claims about the interpretation of Risale-i Nur - a primary religious source for followers of Gülen - that are disliked by Gülen. In 2010, an operation was launched against this small religious group, and 122 people were arrested, including the 66-year-old leader of the group Mehmet Doğan. These people served 17 months in jail without trail. They were released from prison at their first hearing, after it was understood that there was no substantial evidence against them. Immediately after their release, the group applied to the prosecutor's office and demanded clarification of dubious allegations in the operation targeting them. The complaint led to an investigation of people, including Gülenist journalists and police officers.

Let me summarize briefly how the Gülenists repressed this small group by using their clout in the judiciary and police force, quoting from a piece published in the Türkiye daily by Yıldıray Oğur, who covered the issue in great detail: In 2009, Fethullah Gülen said during a speech that a group named "Tahşiye" might emerge and take up arms. Afterward, the Zaman daily, which is led by Dumanlı, took up the story. Citing Gülen's comments, the newspaper published a critical piece entitled "Those creating terrorist groups are out to hatch a new plot." Following Zaman, other Gülenist media outlets launched a media campaign against the group called Tahşiyeciler, and tried to link this religious group to terrorist groups and specifically to al-Qaida. The police began wiretapping phones of the group's members, and carried out an operation as stated above. During the operation, bombs were found in buildings belonging to the group.

Gülenist newspapers claim that the operation inflicted a blow on al-Qaida. But Wikileaks documents disagree on this point. According to a Wikileaks document dated Jan. 27, 2010, and revealed by journalist Nevzat Çiçek, the then-U.S. Ambassador to Turkey, James Jeffrey, wrote in a telegram sent to Washington: "Turkish police also know that the detainees have no relation to al-Qaida. Our sources in the police force say that the arrests are preemptive."

In fact, the wrongdoing against the group called Tahşiyeciler became evident later. The bombs that were allegedly found in the houses of the group carried not their fingerprints, but rather the fingerprints of the police officers. What does that mean? That these bombs had been planted in these houses by the police? Why have the police planted bombs in the houses of this religious group? One answer would be to be able to say, "We caught the criminals." Why has the Gülenist media linked these operations to al-Qaida? Is it to demonize a religious group disliked by Gülen? So, the Dec. 14 operation was conducted to inquire into whether a plot was laid against this small group on the order of Gülen.

So why are journalists detained? This is the most delicate point of the whole issue. For freedom of the press is an indisputable right for all of us. We all advocate freedom of the press and the right of journalists to do their job freely. We will continue defending this. Just as we advocate civilian politics, democracy and the principle that those elected should manage our country. That we defend democracy does not mean we will tolerate politicians' misdeeds. Likewise, that we advocate freedom of press does not permit journalists to commit crimes.

In recent years, Gülenist media outlets have been used in Turkey by the police and prosecutors as instruments for creating certain perceptions and manipulating public opinion during operations that led to arrests of many journalists, civil society volunteers, soldiers, and bureaucrats. These media outlets have carried out merciless character assassinations. Innocent people have been demonized. Witch-hunts have been launched. The same happened during the operation on Dec. 17, 2013, that was launched against the government and businessmen, non-governmental organizations and journalists considered close to the government. For example, there was an attempt to link the charity group Humanitarian Relief Foundation (İHH), which is not affiliated with Gülen, to al-Qaida. Offices of the İHH were raided and reports about these raids ran with the headline "a major blow to al-Qaida." During those days, Gülenist journalist Tuncay Opçin hinted at the role of Gülenist media as generator of perception, by posting the tweet: "In this investigation, perception is more important than judicial outcome. No one will remember the court decision." Allow me to offer an interpretation of this statement: "We will create such a perception with our reports that those targeted will already be eliminated before they can explain themselves."

Were the journalists detained in the current operation because they have been manipulating perception during illegal operations conducted by Gülenist police officers and prosecutors? We don't know yet.

Hüseyin Gülerce, one of the suspects in the Dec. 14 operation who has been among the most influential Gülenist figures until a few months ago, made interesting remarks after giving testimony to the prosecutor. Gülerce underlined the legitimacy of the operation asking, "If persecution is taking place against people (Tahşiyeciler), shouldn't the judiciary investigate it?" Gülerce opposed linking the operation to freedom of the press saying: "Colleagues from the Zaman daily, particularly Mr. Dumanlı, divert attention to press freedom but a legal issue is in question here. First of all, we need to understand this."

In other words, this investigation should be conducted, according to Gülerce, who is a suspect in the investigation and regarded as a spokesman for the Gülenists until some months ago. The investigation is being carried out in secrecy. We all hope that allegations about the detained journalists will be clarified in the coming days and that justice will be ensured.