Washington's secret agreement with the Kremlin 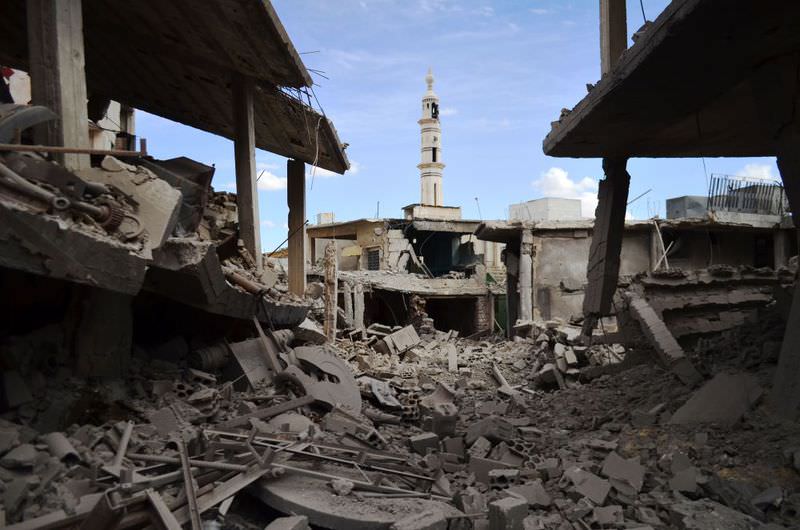 Airstrikes carried out by the Russian air force in Syria have caused monumental damage in the region.
by Yahya Bostan Oct 05, 2015 12:00 am

The tension or perhaps the agreements between the U.S. and Russia concerning the Syrian civil war signals a new balance of power in the region

Turkish Prime Minister Ahmet Davutoğlu, on his return trip from New York, told reporters that "Russia hasn't just entered the war in Syria, they have been involved for some time. Everybody knew where the Russian warships were going as they crossed the Bosphorus." U.S. Secretary of Defense Ashton Carter, likewise, said: "If you are asking me whether I'm surprised, I'm not." Judging by the international community's reaction to the Kremlin's airstrikes in Syria, it would appear that the Russian involvement hasn't caught anyone by surprise. It was indeed shocking, however, that Moscow started launching airstrikes hours after a picture of U.S. President Barack Obama and his Russian counterpart raising their glasses in Washington. The White House's reluctance to criticize the Russian military operation, likewise, caught observers off guard.

Over the past weeks, Moscow has not only made a permanent mark on the Syrian conflict but also rendered a future without Syrian leader Bashar Assad practically impossible. Some experts believe that the Kremlin's most recent steps reflect the probability of Syria's disintegration: Accordingly, Putin ostensibly tries to make sure that his country will call the shots in a smaller piece of land controlled by the Baath regime. In the process, Russian forces have not only killed scores of civilians but also targeted, in Senator John McCain's words, CIA-trained rebels. Let's bear in mind that at least seven nations, not just the U.S., openly support the opposition forces to remove Assad from power.

At a time when the Russian government single-handedly changed the course of the civil war, the United States has been suspiciously reserved. Although Secretary Carter accused the Russians of "pouring fuel on fire," Washington was notably reluctant to sign a joint declaration criticizing the most recent military operations until it bowed to pressures from Turkey and other U.S. allies. In the meantime, the White House presumably leaked news of an agreement between Washington and Moscow over the formation of a transition government, which may or may not feature Assad. According to Turkish government officials, President Obama told Prime Minister Ahmet Davutoğlu that his meeting with Mr. Putin "was very productive despite a number of disagreements."

In light of the most recent developments in Syria, foreign policy experts have been working hard to account for Washington's silence in the face of Russian aggression. Many believe that President Obama would like to avoid military action at all costs particularly because he himself had to clean up after George W. Bush's military campaigns against Afghanistan and Iraq. Another concern for Washington appears to be the likelihood of U.S. troops ending up in the middle of a proxy war in the Middle East. Obama, according to experts, would like to rather turn a blind eye to the situation than confront a number of stakeholders in the Syrian civil war including Iran, whose Shiite militants could easily hurt American interests on the ground. Such are the obvious reasons - which, interestingly enough, fail to account for the whole episode: When the Russians invaded Ukraine, Washington proved perfectly capable of inflicting punishment on the Kremlin by driving down oil prices and hurting the Russian economy. The Obama administration, however, opted not to act at all - which, some argue, might be indicative of a secret agreement between the United States and Russia. Clearly, it is nearly impossible to predict the nature of Washington's negotiations with Moscow. Nor does anyone know whether there is an agreement at all.

One thing, however, is clear: A new balance of power has emerged in the Middle East and the entire region is hearing the footsteps of an emerging order. At least two opposing camps have already emerged. The Kremlin, which rushed to Assad's help in Syria, positioned itself as the protector of the region's Shiites by threatening to launch airstrikes in Iraq and sheltering Damascus from harm. Russia's regional policy, in turn, forces the U.S. to side with the Sunni community. Nowadays, the delicate balance of power in the Middle East reminds many people of the Cold War years. Yet the question remains: If there is indeed an agreement between Washington and Moscow, how does the current situation serve American interests? It is no secret that the Obama administration has a different set of priorities than his predecessors. According to foreign policy analysts, the recent developments in the Asia-Pacific region have distracted the White House from the Middle East. Could Washington be more interested in hurting the Shanghai Five by creating tensions between Russia and China? The question certainly deserves consideration.
Last Update: Oct 05, 2015 1:28 am
RELATED TOPICS