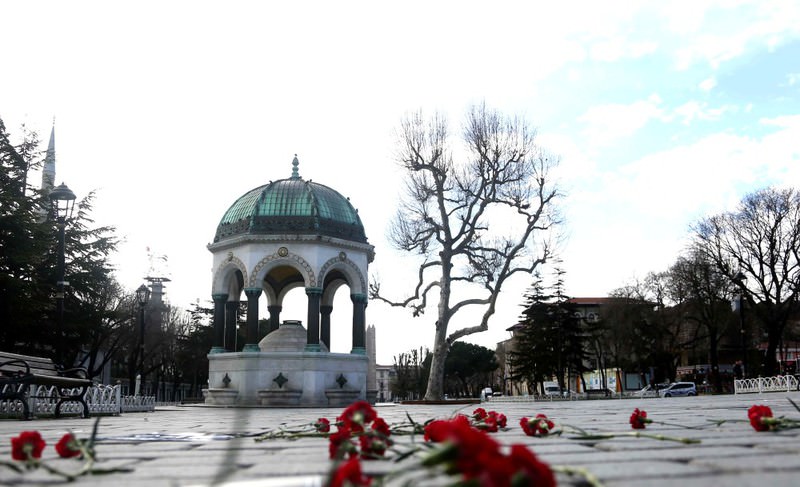 Carnations are left at the site of Tuesday's suicide attacks by DAESH in the historic Sultanahmet Square in Istanbul
by Yahya Bostan Jan 14, 2016 12:00 am

Turkey's key role in the war against terror, this time after DAESH's suicide attacks in Suruç and Ankara, resulted in another attack by the same terror organization, killing 11 and wounding 15 civilians in Istanbul

On Tuesday, 28-year-old Nabil Fadli, a DAESH suicide bomber, blew himself up in the heart of Istanbul's tourist district and claimed 11 lives. The attack took place amid Russian propaganda that Turkey was engaged in oil trade with the terrorists. Tuesday's attack was not the first of its kind. Over the past year, DAESH perpetrated similar assaults in Suruç and Ankara to fuel tensions between various social groups. As a key player in the war against terror, Turkey was always a DAESH target. In this sense, it's more important to ask why the attack took place at this precise moment.

Hours after the deadly blast, Turkey's chief security officials, led by Prime Minister Ahmet Davutoğlu, held an emergency meeting in Ankara to answer the same question. Although the assailant hadn't been identified at the time, they analyzed preliminary findings to address the issue.

According to senior security officials, Turkey remains a high-value target for the terrorists. The intelligence community maintains that DAESH has planned multiple attacks to change the country's direction. The suicide attacks in Suruç and Ankara aimed to fight the battle over northern Syria inside Turkey and to destabilize the country. Sultanahmet, they believe, was a strategic target: The assault not only hurt Turkey's tourism sector but also captured the world's attention by targeting a tourist group.

Another important point is that the suicide attack took place just days after DAESH militants targeted Turkish troops that had been training anti-DAESH forces in northern Iraq. Although the central government has bowed to mounting pressure from Iran and Russia and asked Ankara to vacate the military camp, Turkish forces have been actively contributing to regional peace by training peshmerga forces, which is why DAESH desperately wants them to leave. A week before Tuesday's attack, the Turkish forces shot dead 18 DAESH militants who targeted the military camp. As such, the government believes that the terrorists wanted to avenge last week's clashes.

Furthermore, it's necessary to keep in mind that Turkey has recently challenged DAESH in northern Syria by assisting a ground offensive by moderate rebels to push the terrorists away from the Turkish border and create a DAESH-free zone in the area. Over the past week, the Turkish Armed Forces cooperated with the moderate rebels by firing artillery at DAESH positions across the border. Although the Joint Chiefs of Military Staff argued that Turkey merely responded to mortar attacks from northern Syria, security sources confirm that the military was helping the moderate rebels. Fully aware of the level of cooperation between Turkey and the moderate rebels, DAESH militants sought to take revenge by perpetrating a suicide attack in Istanbul.

A final consideration is that a number of foreign governments - not necessarily countries actively interfering in the civil war - have expressed their displeasure at Turkey's involvement in northern Syria and might want to force Ankara to take a step back. Turkish authorities aren't ruling out the possibility that a hostile government may have used DAESH as a proxy to punish Turkey, which is why Turkish intelligence continues to investigate the assailant's international connections.
Last Update: Jan 14, 2016 3:40 am
RELATED TOPICS