Kick the coalition out of İncirlik 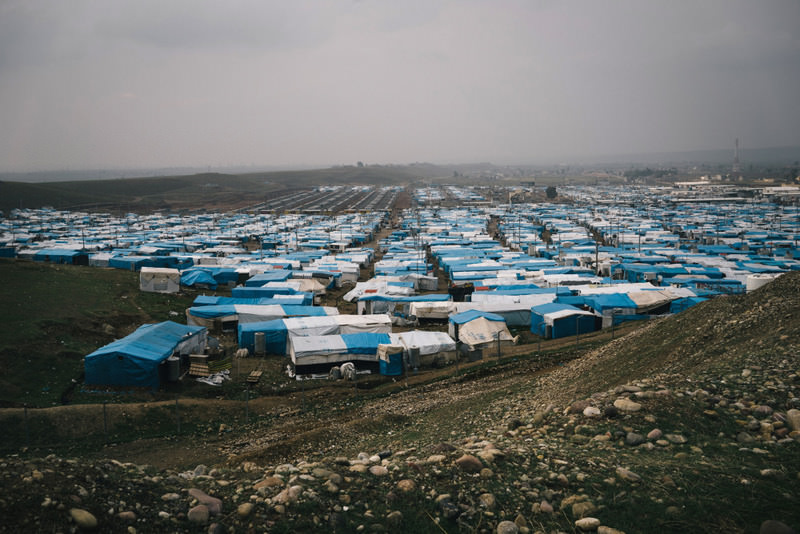 Turkey should kick the coalition, which is yet to take any steps to end the Syrian civil war, out of İncirlik Air Base and use the facility as a shelter for refugees headed toward Turkish borders

German Chancellor Angela Merkel visited Turkey yesterday to discuss the Syrian refugee crisis with the government. In November, Turkey and the European Union signed a 3 billion euro deal to stem the flow of refugees amid objections from certain member states - even though the financial aid package merely amounted to a third of what Turkey has thus far spent on humanitarian relief. In the end, Italy backed down over its objections, but Turkey still has some time to think before the die is cast.

The main problem with the Turkey-EU deal is that the European Union sees the financial aid package as a tool to insulate itself from the Syrian civil war, not to put out the fire burning in the Middle East. In this sense, the agreement places the long-term interests of Turkey and the Syrian people at risk. Had Germany and France, the union's leading members, taken the necessary steps to stop the civil war instead of trying to prevent refugees from reaching Europe, their time and energy would have been better spent. They could, likewise, have put pressure on Russia and Iran to remove Bashar Assad from power and end the bloodshed. But Europe's leaders are admittedly preoccupied with their own interests.

Over the past five years, Turkey has been taking great care of 2.7 million Syrian refugees. To be clear, the country could continue providing humanitarian assistance to the refugee community without European assistance. To end the Syrian civil war, however, Ankara needs the European Union's diplomatic muscle - which is why the government has to renegotiate terms with Brussels and keep Syria on Europe's priority list. More Syrian refugees making it to Europe, in this sense, might be a good thing.

At the same time, Turkey continues to allow the coalition to use the İncirlik Air Base, a military facility in Adana, as part of the anti-DAESH campaign. An agreement between Turkey and the United States - the result of which allowed Ankara to open the base - stipulated that the moderate rebels launch an offensive to liberate Jarablous from DAESH and neutralize terrorists along the Turkish-Syrian border. For the government, the agreement presented an opportunity to push DAESH further away from its citizens and prevent the Democratic Union Party (PYD), a group that it views as a terrorist organization, from carving out an autonomous zone in northern Syria. By creating a safe zone in the area, Turkey hoped to prevent the influx of more refugees.

Six months later, it would appear that Turkey's deal with the United States led to nothing more than the coalition using İncirlik. However, there hasn't been any progress regarding the remaining issues. Although the international coalition conducted airstrikes against DAESH positions in Syria for some time, coalition planes have been reluctant to operate in northern Syria since Turkey downed a Russian jet, citing an airspace violation. To make matters worse, the United States hasn't been supporting the moderate rebels seeking to liberate Jarablous from DAESH. Quite the contrary, the international coalition has been clearing the path for PYD forces. Last week, Special Presidential Envoy for the Global Coalition to Counter ISIL [DAESH] Brett McGurk met with PYD representatives in Kobani - pictures of whom appeared in official social media profiles.

At the same time, Washington has been turning a blind eye to Russia and Iran's support to the Assad regime. In recent days, the regime forces, backed by Russian airstrikes against civilians, were able to cut Turkey's supply route to Aleppo. At this point, there is a real chance that the regime will regain control of Syria's largest city. In light of the most recent developments, close to 80,000 civilians started marching toward the Turkish border. According to Turkish officials, the regime's ground offensive might displace up to 300,000 Syrians and drive up the total number of refugees in Turkey to 3 million.

Neither the United States nor the European Union will take the necessary steps to end the Syrian civil war. Last week, Jordan's King Abdullah said, "We have reached our limit" to indicate that his country was unable to cope with the refugee crisis. Turkey, in turn, can and will do more. But Turkish officials need to keep reminding their allies that they have certain responsibilities. Pending more concrete action, Turkey should not prevent Syrian refugees from traveling to Europe. Opening the İncirlik Air Base to coalition flights haven't done much to put out the fire either. The time has come to think outside the box: Let's kick the coalition out of İncirlik and use the facility as a shelter for refugees marching to the Turkish border. At least the military base will help Syrians instead of taking up space.
Last Update: Feb 09, 2016 2:16 am
RELATED TOPICS