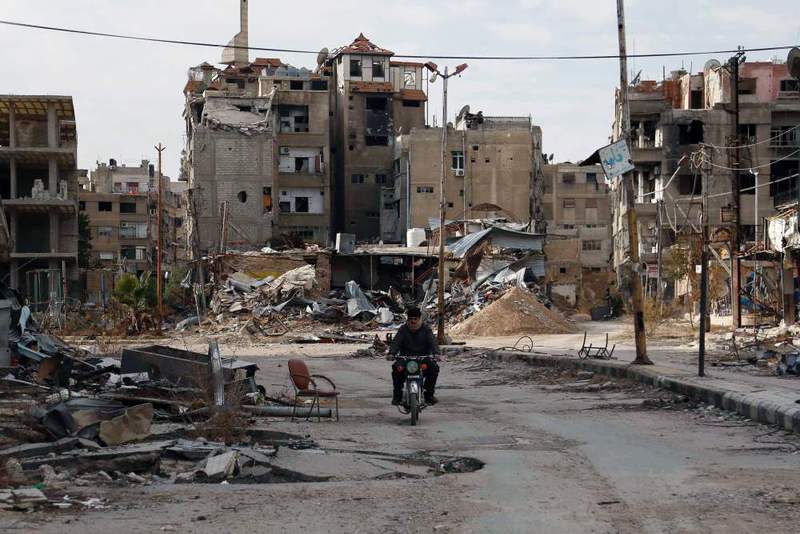 A man riding his motorbike past buildings damaged by the Russian-backed regime forces in Harasta, east of the Syrian capital.
by Yahya Bostan Feb 12, 2016 12:00 am

With new evidence of the PYD's alliance with the Assad regime available, governments making statements in support of the PYD can therefore said to be supporting the regime's cruelty toward Syrians

When Russia attempted to expand the opposition delegation to include the Democratic Union Party (PYD) ahead of the Syria peace talks in Geneva, Switzerland, Turkey took a clear stance against the proposal. When asked if PYD representatives would participate in the negotiations, Foreign Minister Mevlüt Çavuşoğlu threatened to boycott Geneva-III "if the PYD joined the talks among the opposition." Days later, Prime Minister Ahmet Davutoğlu mocked Russia by suggesting that "PYD representatives should sit with the Assad regime if they must come to Geneva." The message was clear: Keeping in mind that the PYD has been working closely with the regime for years, including them in the opposition delegation would only water down the negotiations.

Ankara's position rests on two premises. Firstly, the PYD is a Syrian franchise of the PKK, a globally recognized terrorist organization that Turkey has been fighting for decades. Even though the Obama administration would like to see the PYD as a secular group fighting DAESH in Syria, Turkey has major reservations about Washington's partnership with the organization - especially since the PKK leadership ended a two-year cease-fire in July. Secondly, the PYD leadership has been relatively open about its cooperation with the Assad regime. While the organization deliberately avoided conflict with the regime, Bashar Assad returned the favor by abandoning strategic areas in northern Syria to boost the PYD's influence. Although the Assad regime and the PYD leadership haven't signed an official agreement, Turkish officials maintain their cooperation has been as clear as day. The fact that Channel One Russia recently aired footage of regime troops, PYD forces and PKK militants sharing a military facility near al-Qamishli supports Turkey's claims.

Here's where things get interesting: According to Turkish intelligence, the Assad regime, the PYD leadership and Hezbollah have taken steps to launch a new terrorist organization, Liva Iskenderun (LI), which will be based in the Amanos Mountains near Hatay and will seek to expand the PYD-controlled territory in northern Syria to the Mediterranean coast. Intelligence sources claim that a number of LI affiliates have been making the rounds in northern Syria and southeastern Turkey in an effort to mobilize support. "Our main concern is that LI might target Kurdish community leaders to fuel ethnic tensions in Turkey," a Turkish official said. "At the same time, their allies might present doctored evidence about Turkey's treatment of the Kurdish community to the United Nations and other international organizations."As new evidence of the PYD's alliance with the Assad regime surfaces every day, the developments on the ground lead to the following conclusions, firstly, that the effort to include PYD representatives in the opposition delegation was an attempt to strengthen the regime's hand at the negotiating table, and secondly, that the Obama administration is acting immorally by working with the PYD leadership, which has been collaborating with Bashar Assad's bloody regime.
RELATED TOPICS