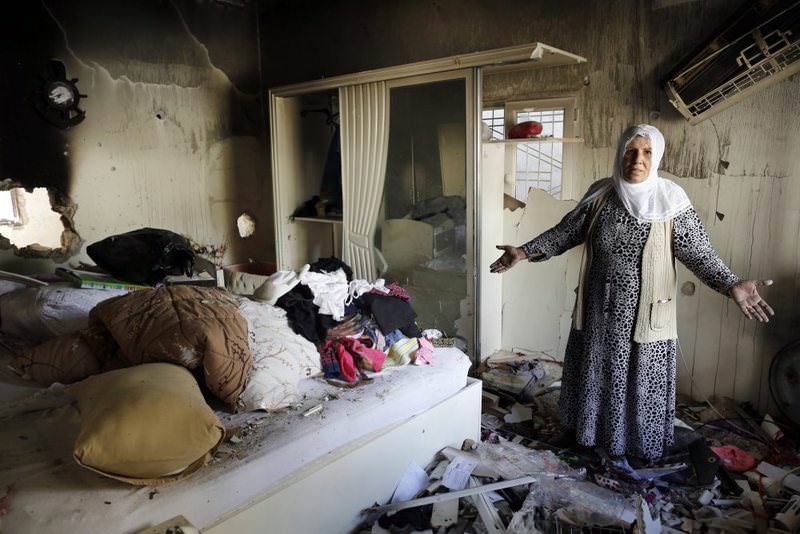 A Kurdish woman standing amid the rubble of her destroyed house, the day after clashes between the Turkish security forces and PKK militants in Cizre district of southeastern u015eu0131rnak province, Turkey.
by Yahya Bostan Mar 07, 2016 12:00 am

Following the failure to form autonomous cantons within Turkish borders, the PKK leadership decided to channel support to its affiliates, the PYD and YPG in northern Syria

When the Justice and Development Party (AK Party) was unable to maintain its parliamentary majority in the June 2015 election, the PKK unilaterally ended a two-year cease-fire by executing two police officers on July 22. Over the past seven months, security forces have cracked down on terrorist networks in certain town centers and across the countryside, killing nearly 4,000 militants. During the same period, over 300 servicemen lost their lives.

The loss of 4,000 militants represents a serious (and unexpected) challenge for the PKK leadership in Northern Iraq. Although the organization probably did not expect such a strong response from Turkey, they should have understood already that the government will not allow armed terrorists to challenge their sovereignty rights. PKK militants, however, do not seem interested in reinitiating the cease-fire because their objectives and game plan have changed.

The PKK's return to violence was inspired by the formation of autonomous cantons by the Democratic Union Party (PYD) and its armed wing, the People's Protection Units (YPG) in northern Syria. Believing that they could create similar entities on Turkish soil, the terrorists started smuggling weapons and ammunition across the Syrian border after the siege of Kobani. In town centers across southeastern Turkey, the PKK armed militia forces in an effort to carve out large chunks of land for an autonomous region.

In recent months, the PKK leadership sought to engage the security forces in residential areas to maximize civilian casualties, whose relatives would be more amenable to revolting against the government. Mobilizing popular support through the proxy of the Peoples' Democratic Party (HDP), they wanted to stage an armed rebellion against the Turkish authorities. Turkey's reluctance to crack down on terrorist networks during the disarmament talks, coupled with PYD's growing popularity in Washington, boosted the organization's self-confidence. In the end, they took action when they thought the period of political stability had ended.

The initial steps included roadblocks, vandalism and arson. Over the next weeks, PKK militants started targeting security forces and civilians and declared autonomous zones in certain towns. When HDP-controlled municipalities actively helped militants dig trenches and plant explosives on roadblocks, the government delivered a strong response by launching airstrikes against PKK positions in Southeastern Turkey and Northern Iraq. Hundreds of terrorists were killed as the organization's logistics network extending from Qandil to Turkish towns was largely destroyed. At the same time, the security forces conducted comprehensive operations in PKK strongholds like Cizre, where more than 600 terrorists were neutralized. While the PKK was wiped out in Silopi, counterterrorism operations in Sur are nearly over.

Over the past seven months, the PKK militants suffered heavy defeats to experience a loss of self-confidence and widespread disappointment. At the very least, they had hoped that HDP voters would support the PKK campaign in southeastern Turkey. Instead, the civilian population left town centers despite the organization's coercion tactics – which gave the security forces an opportunity to work more efficiently. Last week, HDP Co-Chair Selahattin Demirtaş called for a pro-PKK march in Diyarbakır and ended up being ignored by his own supporters. The HDP leadership, along with the PKK, suffered heavy losses since the cease-fire ended.

Having failed to form autonomous cantons on Turkish soil, the PKK leadership decided to implement a new strategy. At this point, they are willing to sacrifice as many militants as necessary to prevent Turkey from mounting pressure on PYD/YPG militants in northern Syria. In other words, the PKK will seek to stall the security forces to give their Syrian franchise some breathing room.

The PKK leadership has come to terms with the fact that neither an armed rebellion nor the formation of autonomous cantons are realistic goals. Instead, they will try to maintain their control over northern Syria by launching attacks against civilians and the security forces in western Turkey. "They enlisted the services of terrorist groups including the TAK [Kurdistan Freedom Hawks] and DHKP-C [People's Revolutionary Liberation Party-Front]," a senior Turkish official recently told me. "The suicide attack in Ankara, where 28 innocent people died, was the first strike. Until now, the Obama administration has been desperately trying to distinguish between the PKK and the PYD/YPG. Eventually, they will have to acknowledge that the PKK just signed up for a suicide mission to protect YPG forces."
Last Update: Mar 07, 2016 1:17 am
RELATED TOPICS