Ankara attack: Syria at the heart of terror problem 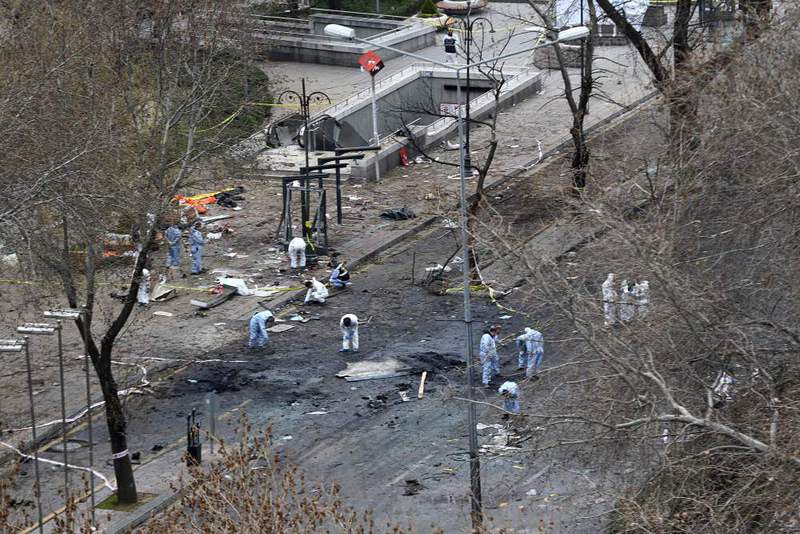 Forensic experts investigate the scene of an explosion on the day after a suicide car bomb ripped through a busy square in central Ankara, killing at least 35 people and wounding 125.
by Yahya Bostan Mar 15, 2016 12:00 am

The only way to prevent such heinous terror attacks is to end the Assad regime's bloodshed in Syria, which empowers and emboldens terrorist groups

Seher Çağla Demir was a 24-year-old college student who had crossed the southern border in 2014 to join the Democratic Union Party/People's Protection Units (PYD/YPG), the PKK's Syrian franchise. Upon completing her military training, she returned to Turkey, where she, along with five others, was charged with membership of a terrorist organization. On Sunday, Demir and another assailant, whom the authorities are yet to identify, detonated a quarter ton of explosives that had been placed in a white BMW vehicle. According to security sources, the vehicle was reported stolen in Şanlıurfa. The suicide attack took place at a time when high school students, football fans and shoppers were waiting for the bus. On Monday morning, the authorities announced that 35 people had died in the explosion.

In the wake of Sunday's suicide attack, Turkey's allies issued familiar statements. The U.S. State Department strongly condemned the assault, while the European Union said they were in solidarity with Turkey. "There can be no justification for such heinous acts of violence," remarked NATO Secretary-General Jens Stoltenberg. Even Vladimir Putin offered his condolences to the Turkish people.

In the face of such senseless violence, it is good to know that Turkey isn't alone. But Turkey's allies can and must do more.

History shows us that condemning acts of terrorism alone doesn't make terrorists less likely to strike again. Failure to eliminate the root causes of terrorism, if anything, further encourages them. Over the past six months, two more suicide attacks took place in Ankara, with 131 people losing their lives. On Sunday, Turkey once again witnessed terrorists' inhumane methods. And no other country can claim complete immunity from terror attacks.

Let us establish the facts so that the problem will become clearer.

The terrorists targeting Turkish citizens today are operating out of Syria. Moving forward, a new kind of terrorism emerging out of the Syrian civil war will place not only Turkey's national security at risk but also that of Europe and other regional powers. The power vacuum in Syria, furthermore, breathes new life into terrorist groups whenever they find themselves in trouble. At the same time, terrorist organizations, which claim to fight each other, also learn from one another. The fact that a PKK operative replicated DAESH's suicide attacks on Sunday should raise eyebrows. This is a dangerous trend that threatens the lives of people around the world.

At the same time, PKK terrorists have long-term plans for northern Syria. Their effort to form cantons akin to the PYD-controlled areas across the southern border has failed due to a lack of support from local communities. At this time, the PKK leadership, which suffered heavy losses due to comprehensive security operations and failure to mobilize people, has experienced a certain level of disappointment - which is why they seem to have shelved their plans for southeastern Turkey. Instead, the organization decided to keep the security forces occupied by perpetrating attacks in western Turkey to keep the PYD/YPG positions in northern Syria safe.

To be clear, the PKK militants haven't gone to great lengths to conceal their intentions. Last week, at least 10 terrorist organizations, led by the PKK, formed an alliance called the Peoples' United Revolutionary Movement. Among the groups joining the umbrella organization was the Revolutionary People's Liberation Party-Front (DHKP-C), whose members the European Union have been reluctant to deport. The alliance not only makes it possible for the PKK leadership to outsource their attacks in major cities to smaller groups but also allows them to distract the public by letting various groups claim responsibility for assaults - just like they did with the PYD.

Turkey just suffered a heinous attack and our allies, who were quick to condemn the assault, have to try harder. We have to end the bloodshed in Syria, which empowers and emboldens terrorist groups, by removing Bashar Assad from power and facilitating a political transition. The international community must no longer stand idly by as Turkey attempts to address the refugee crisis alone. At the very least, the European Union, whose members are reluctant to work with Ankara, should help Turkey fight terrorism and create a safe zone in northern Syria. Taking into account the partnership between the PKK and the YPG, which has been paying lip service to fighting DAESH for too long, the world needs to take a clear stance against all terrorist groups. Finally, Turkey's enemies, which have been willing to let terrorists do their dirty work, have to understand that, one way or another, the chickens will come home to roost.