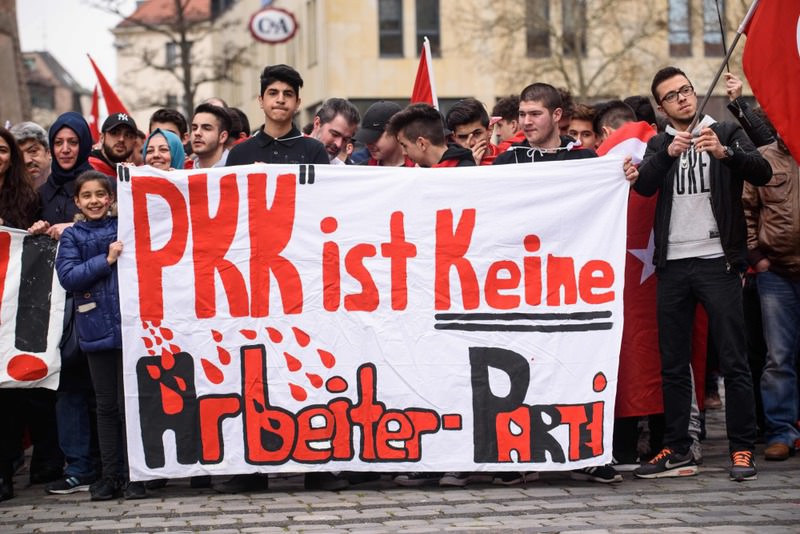 People holding a banner reading ,PKK is not a worker's party, during a ,Peace March for Turkey, organized by the new German Turkish Committee in Nuremberg, Germany.
by Yahya Bostan Apr 19, 2016 12:00 am

U.S. Ambassador Bass and Demirtaş's statements along with the PKK's self-criticism are like parts of a big puzzle, and it is clear that each serves their various regional interests

On April 12, Selahattin Demirtaş, the co-chair of the Peoples' Democratic Party (HDP), the PKK's political wing, told a group of German politicians and HDP supporters in Berlin that the PKK's return to violence had put pressure on his party. In a rare piece of public criticism of the PKK leadership, Demirtaş said nothing could be accomplished by declaring self-rule in eastern and southeastern Turkey.

The PKK, which Turkey, the European Union and the United States consider a terrorist organization, unilaterally ended a two-year cease-fire and walked out of disarmament talks in July 2015. Although the group kicked off their bloody campaign by executing two police officers in their Şanlıurfa home, at least two developments hurt their confidence.

Firstly, PKK militants, unable to fight a technologically advanced Turkish military in the countryside, withdrew to residential areas in order to form autonomous entities on Turkish soil akin to their Syrian franchise's cantons across the border. Engaging security forces in urban areas, furthermore, offered the added benefit of forcing Turkey to violate human rights - which, in turn, would make it easier for the PKK to find new recruits. The PKK leadership was wrong. In conflict-ridden town centers, locals turned their backs on the militants and evacuated their homes. The security forces, in turn, acted with extreme care to avoid civilian casualties. Meanwhile, the authorities provided housing support to residents of towns targeted by the PKK.

Secondly, the PKK leadership was encouraged by their ability to stockpile weapons and ammunition on Turkish soil and what they thought was widespread international support. They falsely assumed that they could actually defeat the Turkish military if they turned their backs on the negotiating table. Months later, the Turkish security forces had effectively removed PKK militants from former strongholds of Sur, Cizre and Silopi. Nowadays, counter-terrorism operations continue in Nusaybin. According to Turkish officials, close to 6,000 PKK members have been killed or arrested in nine months.

The PKK leadership in Northern Iraq, no doubt, understands the extent of their defeat. But they have shown no interest in de-escalating the situation. If anything, the PKK has taken its violent campaign to the next level by spreading fear in western Turkey by launching two suicide attacks in Ankara in February 2016. In doing so, the PKK leadership was trying to alleviate Turkey's pressure on People's Protection Units (YPG) militants in Northern Syria.

In recent months, the PKK's violent campaign made it more difficult for Turkey's leftists to buy into the propaganda that the organization wanted peace. Likewise, the HDP's reputation in western Turkey suffered irreparable damage. At this point, even their (former) supporters admit that HDP politicians were wrong to offer their condolences to suicide bombers, transport weapons for the PKK and fail to condemn PKK attacks. In less than a year, the HDP leadership managed to marginalize themselves.

Faced with potential judicial action, HDP politicians have recently started condemning violence. The PKK leadership, too, seems to agree: Last week, a senior PKK leader publicly admitted that they were wrong to fight the security forces in residential areas - which some commentators saw as a sign of a unilateral cease-fire in the making.

Let's be clear about one thing: Had the PKK leadership thought that violence was unproductive, they would have abandoned it a long time ago. This is certainly not the case. Instead, the PKK/HDP statements came shortly after U.S. Ambassador John Bass told a group of diplomatic correspondents in Ankara that the terrorists must lay down their arms.

Why, one wonders, has the U.S. government grown an interest in the PKK's disarmament?

In truth, the sudden change in Washington's attitude dates back to April 1, when President Recep Tayyip Erdogan met with U.S. President Barack Obama at the White House. In the margins of the Nuclear Security Summit, President Erdogan presented his counterpart with an alternative plan to fight DAESH in northern Syria, which would have Arab fighters, currently among the Syrian Democratic Forces ranks, join the Free Syrian Army. In return, the president urged the United States to stop supporting the YPG, the PKK's Syrian franchise, and offer air support to the counter-DAESH force. In recent weeks, there has been a notable increase in U.S. air support for the Free Syrian Army.

The Obama administration, however, continues to treat the YPG as part of the counter-DAESH effort and wants to talk the PKK leadership into a unilateral cease-fire to keep a lid on Turkey's protests. Ambassador Bass's statements, like Demirtaş's words and the PKK's self-criticism, must be seen as part of a bigger picture.
Last Update: Apr 19, 2016 1:11 am
RELATED TOPICS