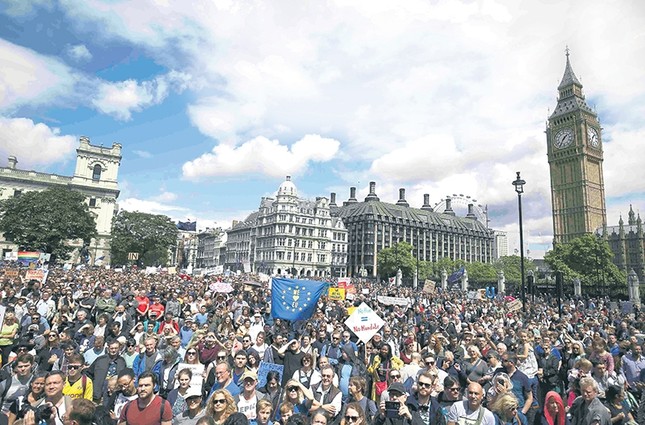 One man's misery is another man's opportunity: The European Union, which was recently shaken by the U.K.'s decision to leave, seems as though it will soon lose its seat to NATO

Britain's decision to withdraw from the European Union added to already serious doubts about the future of continental Europe. Since June 23, experts have made various predictions about Brexit's effect on the continent. But everybody seems to agree that losing Britain will inevitably weaken the European Union. Overnight, many commentators and politicians maintain, the union has become a more fragile political and economic organization - which Standard & Poor's affirmed by cutting Brussels' credit rating last week. What remains to be seen is whether Britain's departure will spell the death of European unity. And the answer to that question depends on the ability of member states to manage the crisis along with their willingness to reflect on their mistakes.

In its current state, the European Union doesn't give out positive vibes at all. Under the leadership of France and Germany, the organization has failed to develop a common foreign and defense policy - which limits Brussels' ability to exert influence over the Middle East among other places. At a time when terror attacks on European soil are planned in Syria, the EU opts to watch the civil war from the sidelines. Unable to make an impact on global developments, the union has proved largely unable to protect itself from dangerous trends in the Middle East.

Over the past year, the EU's selfish approach to the refugee crisis further hurt its credibility and added to the human cost of the violent conflict. Images of displaced children being tear-gassed and beaten at Europe's borders inflicted possibly irreparable damage to Brussels' soft power. Meanwhile, terror attacks in European capitals forced national governments to step up security at the expense of individual liberties and group rights. With special forces patrolling the streets of Europe, the union's core principles have been slowly eroding. Violence has also erupted across the continent between the security forces and protestors over economic tensions. Police brutality in Paris, among other places, cast a shadow on France's self-proclaimed identity as the land of democracy and plenty. Finally, the EU's prejudice toward Turkey and Ankara's constant subjection to double standards raises further questions about the organization's reliability as a serious partner.

One thing is clear: The world has come to see the EU as a disappointment as opposed to a hope.

Unless EU member states, especially Europe's leaders, draw lessons from their past mistakes, the organization might become even more fragile and unstable. What will follow Brussels' demise should be pretty clear: Having annexed the Crimea, Russia will put further pressure on Eastern Europe. And NATO would have to step in to contain Moscow and keep Europe safe.

Britain's decision to leave the EU added to the importance of the upcoming NATO summit, which will take place in Warsaw, Poland on July 8-9. During the summit, world leaders, including President Recep Tayyip Erdoğan, will discuss the situation in Libya, the Syrian civil war, counter-terrorism, NATO bases in central Europe and the NATO mission in Afghanistan. But it's hardly a secret that NATO members will talk about the power vacuum to follow the European Union's decline at length.

One man's misery is another man's opportunity. With the EU in trouble, it might be NATO's time to shine.
RELATED TOPICS