Manbij concerns pit Turkey against US 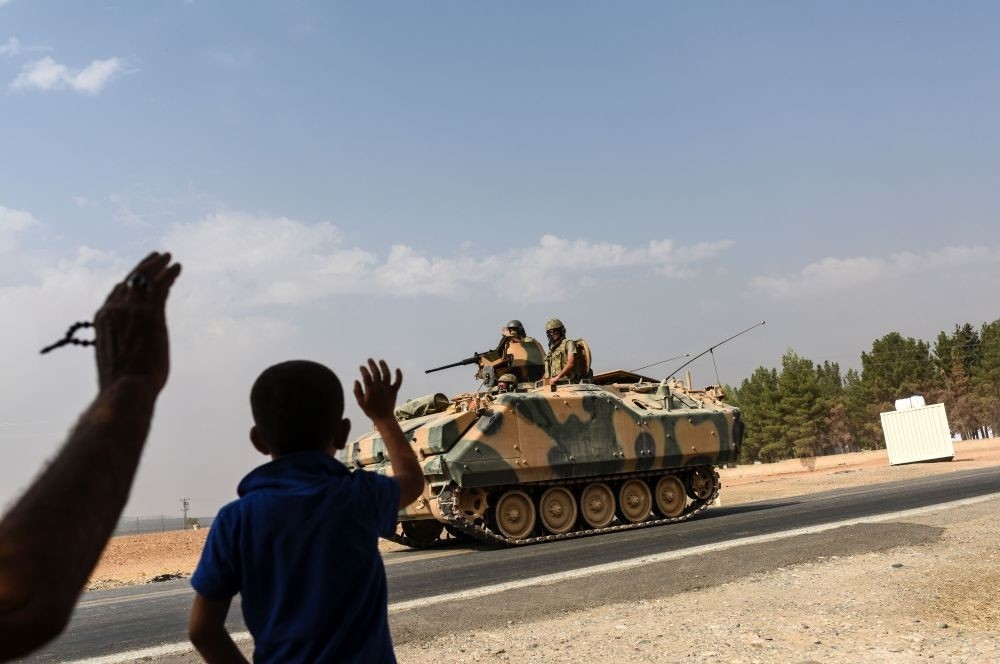 A boy waving to Turkish tank convoy driving into Syria from the Karkamu0131u015f distrcit in Turkey's southern province of Gaziantep on the border wtih Syria, on Aug. 26.
by Yahya Bostan Sep 05, 2016 12:00 am

Washington's response to a potential move by the FSA against Manbij will mark a turning point in Turkey-U.S. relations

Operation Euphrates Shield, launched against DAESH targets by Turkey almost two weeks ago is not merely an effort to remove DAESH from the border. The Turkish military also wants to prevent the Democratic Union Party's (PYD) armed wing People's Protection Units (YPG), the Syrian franchise of the PKK, from grabbing more land and forcing native communities to leave their lands.

Since late August, Turkey made considerable progress regarding the DAESH-held parts of the operation. In less than two weeks, the country's border with DAESH shrunk to approximately 10 kilometers. The Turkish-backed Free Syrian Army (FSA) forces have made rapid progress from Jarablus to the west. At this point, the border has been almost completely cleared from DAESH. Last week, the Turkish Armed Forces (TSK) deployed additional forces into Syria to open an additional front against DAESH near al-Rai. Once the Turkish forces secure the border completely, they will head south to al-Bab. Their goal is to create a terror-free oasis for Syrian war victims.

For some time, observers wondered how regional powers that had intervened in the Syrian civil war before Turkey would react to Operation Euphrates Shield. The argument was that by targeting northern Syria, Turkey would risk engaging Russian, Iranian, U.S. and pro-regime forces.

The reaction, however, has been much more positive than anticipated. With the exception of a handful of statements, Russia, Iran and Bashar Assad's regime responded to the Turkish operation with silence. Although Damascus protested what the regime described as a violation of its sovereignty rights, it would appear that they finally understand that the YPG has a separatist agenda. It was, therefore, no coincidence that the regime forces clashed with the PKK's Syrian franchise in Hasakah for the first time. If the operation proves successful, Turkey will make a valuable contribution to Syria's territorial integrity - which the regime seems to welcome.

Iran's position is somewhat different. If there is ever a PKK-controlled statelet in northern Syria, it will not just affect Syria but also set a dangerous precedent for the Kurdish community in Iran. In many ways, Iran shares Turkey's concerns about the PKK's growing control in northern Syria. In this sense, it is noteworthy that Turkish Foreign Minister Mevlüt Çavuşoğlu paid a surprise visit to Tehran just days before the operation kicked off - which was followed by an affirmation by Prime Minister Binali Yıldırım of Turkey and Iran cooperating to secure Syria's future. It would appear that Tehran's only request was for Turkey to coordinate its actions in northern Syria with Damascus.

Russia, meanwhile, is arguably the most important country to Operation Euphrates Shield. Having been told at the G20 Antalya summit in October 2015 about Turkey's plans, Russian President Vladimir Putin had told the Turkish government that Moscow would issue a statement but would not take action. In recent months, the rapprochement between Turkey and Russia made it possible for Ankara to move forward with their plans. As promised, Putin's response was limited to a written statement. Looking at the reactions of pro-Kremlin think tanks, it is safe to assume that Russia does not have a huge problem with the operation because they consider the YPG as "an American puppet" in northern Syria as opposed to a legitimate party. In other words, the Russians view YPG advances as U.S. gains. An additional benefit of tacitly supporting the operation is to maintain a healthy relationship with Turkey - which helps secure Russian bases in Syria.

Simply put, Operation Euphrates Shield meets the minimum expectations of Russia, Iran and the Assad regime. The main question is when Moscow, Tehran and Damascus will change their mind about the Turkish mission. If Turkey creates a safe zone in northern Syria and decides to march south toward Aleppo to target the regime alongside the YPG and DAESH, all three countries are likely to revisit their position. Short of a direct attack against its national interests, Turkey will stick to the goal of defeating terrorist groups, namely DAESH and the YPG.

Ironically, Turkey's biggest problem in northern Syria is the United States. U.S. Vice President Joe Biden, who visited the Turkish capital on the day Operation Euphrates Shield kicked off, voiced support for the incursion. The coalition, furthermore, provided air cover to the Turkish-backed forces in certain areas. As a matter of fact, Mr. Biden went as far as to warn the YPG that they would not enjoy U.S. support on the western side of the Euphrates - which was his way of keeping the administration's word to the Turks. According to the agreement, the YPG-led Syrian Democratic Forces (SDF) would liberate Manbij from DAESH, following which the YPG would move back to the eastern side of the Euphrates. In the end, the YPG did not honor the agreement. Even though U.S. officials like to tell the press that the group has already withdrawn, the YPG moved armed terrorists from Kobani to Manbij in an effort to reinforce their positions.

The U.S., which protected the YPG against the regime forces in Hasakah, also asked Turkey to focus on DAESH as opposed to the PKK's Syrian franchise. U.S. President Barack Obama's statements in China, where he met with Turkish President Recep Tayyip Erdoğan, make this position clear. While reiterating Washington's support for Turkey's anti-DAESH operations, Obama kept silent about the YPG.

Moreover, there are unconfirmed claims that U.S. special forces have been deployed to northern Manbij in an effort to prevent clashes between the Turkish-backed forces and the YPG. Although Ankara asked Washington for the coordinates of their special forces to not shoot them by mistake, the U.S., citing security concerns, refused to share information. According to sources in Ankara, Washington's response makes the claim about U.S. special forces more credible.

The Turkish-backed Free Syrian Army (FSA) has been extremely successful in northern Syria as the border was largely cleared from DAESH in less than two weeks. According to sources, the FSA's next target will be al-Bab, a major DAESH stronghold. Meanwhile, Turks closely monitor YPG reinforcements in Manbij. If the YPG refuses to withdraw from the area, the Turkish-backed forces might launch an offensive against Manbij along with al-Bab. Washington's response to a potential move by the FSA against Manbij will mark a turning point in Turkey-U.S. relations. It remains to be seen whether the Obama administration will choose the YPG, the PKK's Syrian franchise, over Turkey, a NATO ally that happens to be one of the world's largest economies.
RELATED TOPICS