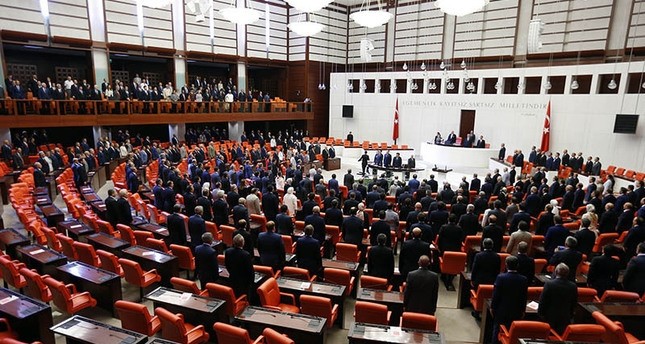 Having thwarted a coup attempt just three months ago, Turkey enters an interesting period, as the presidentialism debate was kicked off again by an opposition leader as opposed to President Recep Tayyip Erdoğan or the ruling party

Since the July 15 coup attempt, Turkey's attention shifted to the Gülenist Terror Group (FETÖ), from the proposed transition to a presidential system of government. Even though Prime Minister Binali Yıldırım met with main opposition leaders to jump-start negotiations on the new Constitution, the public was distracted by other developments including the search for coup plotters on the run and ongoing military operations against the PKK at home and Daesh in northern Syria. Finally, attention shifted to the pending liberation of Mosul - another national security issue - until Nationalist Movement Party (MHP) Chairman Devlet Bahçeli urged the government to expedite efforts for constitutional reform.

Addressing members of his party at Parliament, Bahçeli reiterated his support for a parliamentary system but, noting that there was a"de facto situation" already, called on the government to "bring their proposal for presidentialism to Parliament. If [the bill] receives 330 votes in favor, the people would have to make a decision. We will respect the people's decision."

To be clear, the MHP leader's statement created a lot of confusion among the AK Party ranks. Although Bahçeli urged the government to act, he didn't say that his party would support the proposal. Here's why the MHP vote is crucial: The ruling AK Party controls 317 parliamentary seats but they need 330 votes to hold a constitutional referendum or 367 votes to change the Constitution by parliamentary vote. Provided that the speaker, a member of the AK Party, cannot vote, the government needs to secure the support of at least 14 opposition deputies. If the MHP is on board, a constitutional referendum can take place and, provided that the people are convinced, Turkey can transition to a presidential system.

However, Bahçeli said nothing about supporting the government's proposal - which is why the AK Party's policy team is wondering why he would make the statement in the first place. According to sources close to the party, there are three possibilities:

First, the Justice and Development Party (AK Party) leadership believes Mr. Bahçeli's message about holding early elections with the state of emergency still in effect - he said it would be "bad for the country" - is equally important. The MHP leader, they argue, could have made the statement with the assumption that the government would call for early elections in 2017. Keeping in mind that the AK Party could win enough seats to single-handedly amend the Constitution, the MHP leadership might be worried that they would have no power over the government's proposal for constitutional reform and the presidential system whatsoever. It's quite likely that Bahçeli would rather work with the AK Party on the proposal rather than risk being sidelined after early elections next year.

Alternatively, Devlet Bahçeli, who has been a big supporter of the government's anti- FETÖ campaign after the coup attempt, might be convinced that the danger has been thwarted. Although he remains in favor of extending the state of emergency, the MHP chairman could be trying to hurt the government by pushing for parliamentary debate on the presidential system and denying his party's support to watch the bill fail. If Parliament rejects the government's plan, it would kill the initiative for good. Would Bahçeli set up a trap for the government? Policy makers think it's unlikely.

Thirdly, some experts believe that the MHP leadership changed their policy on presidentialism in the failed coup's wake. In recent weeks, Bahçeli repeatedly described July 15 as an assault against the country. He might be thinking that Turkey's current system of government makes it easier for extra-parliamentary forces to meddle in the policy-making process. At a time when Turkey not only brings coup plotters to justice but also fights against terrorist groups including Daesh, Bahçeli might want to seize this opportunity to address structural weaknesses in the Turkish government by backing the transition to a presidential system. It's not entirely out of question.

Prime Minister Binali Yıldırım's response to the MHP leader's statements indicates that the government trusts Bahçeli. Last week, he announced that the AK Party would introduce a constitutional amendment package to Parliament - to which Bahçeli responded by saying they will take a look at the proposal.

Having thwarted a coup attempt just three months ago, Turkey enters an interesting period, as the presidentialism debate was kicked off again by an opposition leader as opposed to President Recep Tayyip Erdoğan or the ruling party. At this point, there are strong signs that Turkey could switch to presidentialism through consensus. To the surprise of many, a presidential system is in sight.
RELATED TOPICS