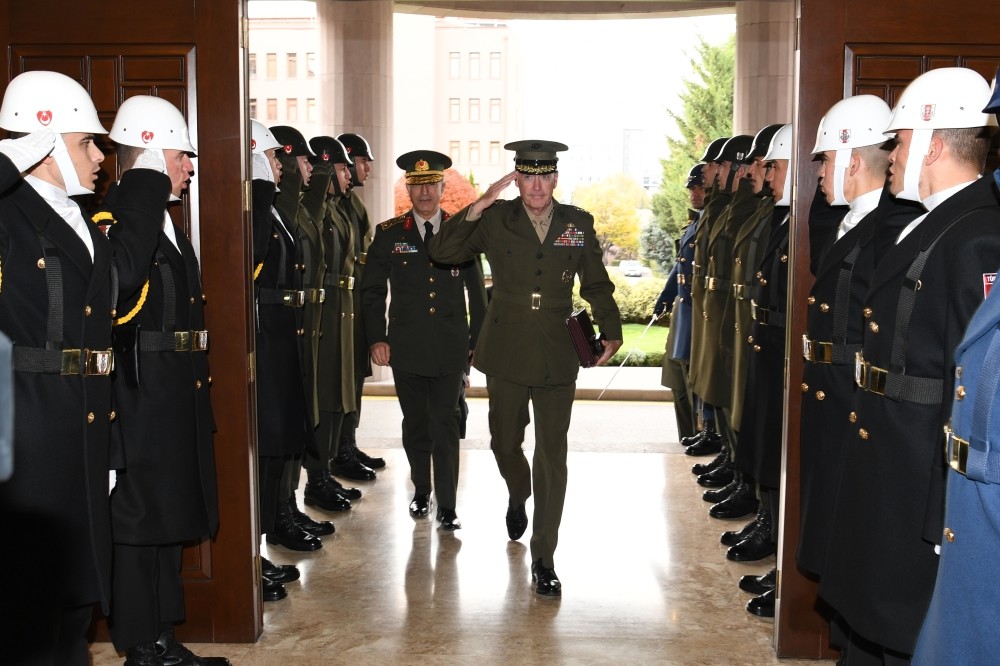 Chairman of the Joint Chiefs of Staff Gen. Dunford (R) paid a surprise visit to Ankara to discuss developments in Iraq and Syria.
by Yahya Bostan Nov 19, 2016 12:00 am

Washington had no intention of stepping on Damascus and Moscow's toes and having failed to secure U.S. support, Turks decided to continue by themselves

Earlier this month, U.S. Chairman of the Joint Chiefs off Staff Gen. Joseph Dunford paid a surprise visit to the Turkish capital, Ankara, and held a five-hour meeting with Turkish officials including Chief of General Staff Gen. Hulusi Akar. The delegations focused on the Raqqa operation, among other critical issues.

Here's some background on the meeting: The Americans told Turkish officials that the Raqqa operation, like the Battle of Mosul, would be a two-tiered offensive. The initial stage, geared toward isolating the target area, would be conducted by the Syrian Democratic Forces (SDF), which includes People's Protection Units (YPG) militants. They argued that the isolation effort must start immediately to prevent Daesh members leaving Mosul from entering Raqqa. Moreover, the Americans pledged to respect Turkey's wishes in the operation's second stage and not allow YPG militants to enter Raqqa. "Arab fighters within the SDF will enter the town center," an American official told the Turks. "They can be accompanied by Free Syrian Army (FSA) forces of your choice if you desire."Turkish officials describe the U.S.'s proposal as noteworthy. "Washington's willingness to respect our priorities was received positively," a senior official said. "It made sense that isolating the area would stop the flow of Daesh militants from Mosul to Raqqa." A joint operation with the U.S. to liberate Raqqa was something that the Turks wanted.

Shortly afterward, the Arab fighters within the SDF left the group citing disagreements with YPG forces. In other words, there were no more Arabs left to join the second stage of the Raqqa operation - which raises the question whether YPG militants would have to fight alongside the FSA when the time comes.

Let's take a step back and focus on the second issue that came up in Gen. Dunford's meeting with the Turks - the situation in Manbij. In recent months, Turkey repeatedly called for the removal of the YPG, which it considers a terrorist organization, from the western side of the Euphrates. The demand was voiced by a number of Turkish officials including President Recep Tayyip Erdoğan. In response, the Obama administration had claimed that the YPG forces had already left Manbij - which Turkish intelligence could not independently verify. At the meeting in Ankara, the U.S. delegation was told once again that the YPG had to leave without further delay. The U.S. promised that the withdrawal would take place within two weeks. According to a senior Turkish official, Turks took the U.S. pledge with a bucket of salt because "promises were not kept in the past." In the end, time proved Turkey right: The YPG forces started advancing toward al-Bab, let alone go back to the eastern side of the Euphrates.

There have been problems with the effort to liberate al-Bab as well. When Turkey requested air cover from Washington, U.S. officials refused to help citing the geographical proximity of the target area to Aleppo. "They made it clear that Washington had no intention of stepping on the toes of Damascus and Moscow," an official stated. Having failed to secure U.S. support, the Turks decided to continue by themselves.

The final issue that was discussed by Gen. Dunford and the Turkish delegation was the situation in northern Iraq. Ankara had two requests: First, the Hashd al-Shaabi would have to be kept away from Tal Afar. Second, the PKK must not establish a military base in Sinjar. In the end, the two groups drew out plans to strike Tal Afar together and gained control over the local airport.

What conclusions do the Turks draw from the most recent developments in Syria and Iraq? This is a difficult period when allies do not kept their promises among themselves. Under the circumstances, Turkey has no choice but to take unilateral action as they did in Operation Euphrates Shield.
RELATED TOPICS