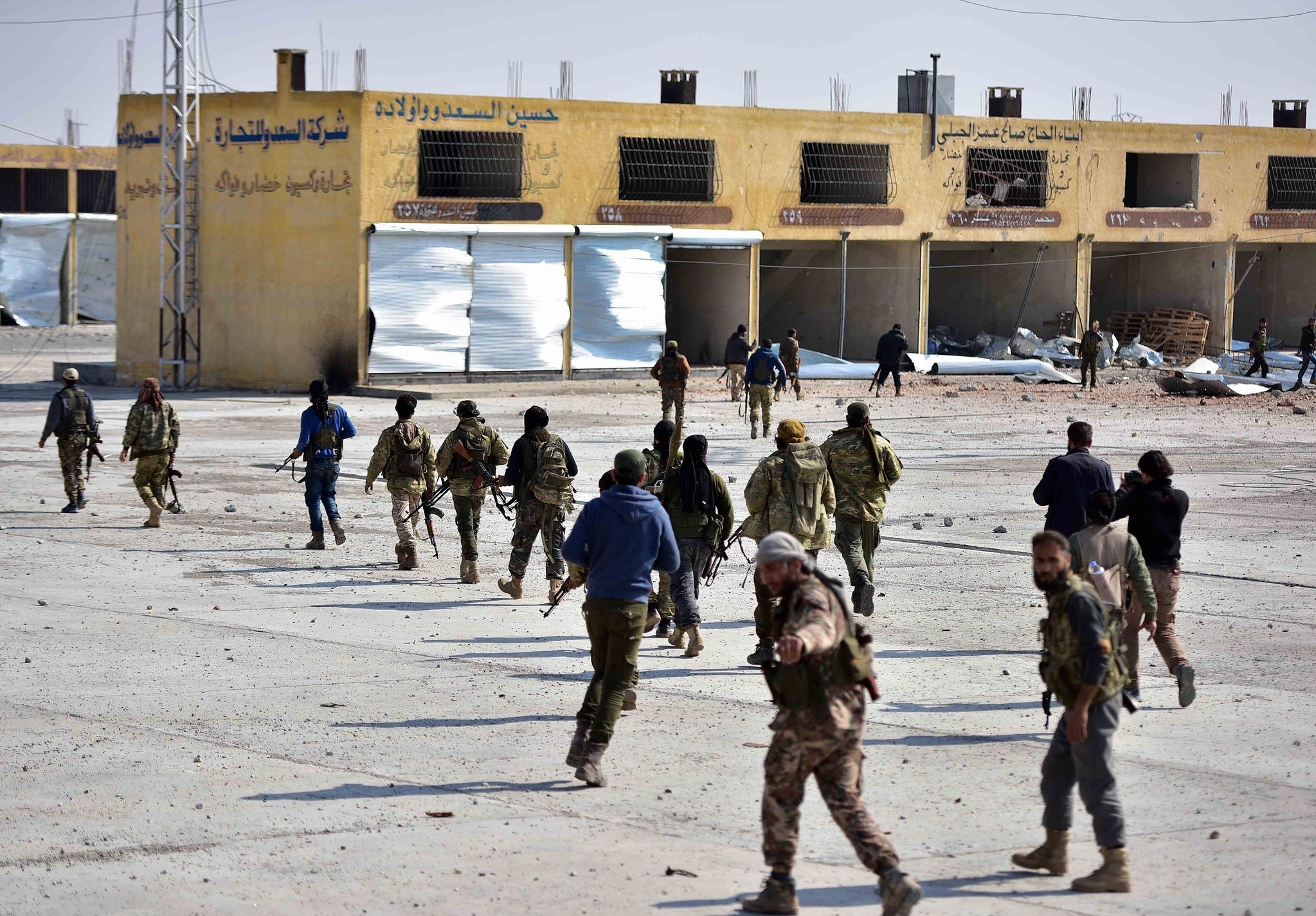 Turkish-backed Free Syrian Army (FSA) backed by Turkey soldiers advancing through the city center of al-Bab as part of the counterterror offensive of Operation Euphrates Shield against Daesh terrorists, Syria, Feb. 11.
by Yahya Bostan Feb 13, 2017 12:00 am

The Free Syrian Army backed by Turkey, which is about to clear al-Bab of Daesh terrorists, is determined to continue its counterterror offensive, Euphrates Shield, against Daesh and the Syrian armed militant group YPG, but perhaps under a different name this time

Operation Euphrates Shield, which was launched by Turkey to remove Daesh terrorists from its borders and stop the People's Protection Units' (YPG) land grab, is drawing to an end. When today's paper went to print, the Free Syrian Army (FSA) and the Turkish special forces had seized control of a large chunk of the Daesh-controlled town. In recent weeks, Jabal al-Sheikh Akil, Al-Farouq hospital, the youth housing and the Zamzam neighborhood had been captured by the moderates. At the same time, the Euphrates Shield forces gained control over the strategic M4 highway, which is located south of the town center, to surround the Daesh-held area from the north, west and south. Unless something goes wrong, it is safe to assume that al-Bab, a crucial hub for the terrorists, is about to fall.

To be clear, the al-Bab operation has been the most challenging part of Operation Euphrates Shield. In addition to putting up fierce resistance, Daesh terrorists used civilians as a human shield and shot dead anyone who tried to escape. When the Turkish-backed forces started to proceed with more care in order to minimize civilian casualties, two distinct rumors surfaced in the international media: First, they argued that the dismissal of the Gülenist Terror Group (FETÖ)-linked officers from the military after the July 15 coup attempt had weakened the Turkish Armed Forces (TSK). The second line of argument was that the U.S. should work with the YPG, not the FSA, since the Turkish military supposedly lacked operational capabilities.

Needless to say, the successful completion of the al-Bab operation puts both rumors to rest. Moreover, it is important to note that 71 Turkish soldiers lost their lives during the campaign, while no civilians were killed in the clashes. Had any other country or group tried to liberate the town, hundreds of civilians would have presumably died. With the liberation of al-Bab under the belt, the Turkish military distinguished itself by showing that they actually care about human life.

The million-dollar question is what happens next. For Turks, al-Bab marks the southern border of the safe zone – which means they will not go further south and end the operation here. Meanwhile, the regime forces, which had been approaching al-Bab from the south, have stopped their advances – as confirmed by the Russian Ministry of Defense.

In the wake of al-Bab's liberation, however, the Turkish military will not just leave Syria. A far more likely scenario is that a new military effort will start either as an extension of Operation Euphrates Shield or under a different name. Either way, there are three options on the table for the Turkish-backed FSA.

First, the moderate opposition forces could advance toward Afrin, a YPG-controlled city located in northwestern Syria, just south of Turkey's Kilis province. Turkey is primarily concerned about the PKK's Syrian armed wing YPG's presence here due to the threat it poses to their national security. While the PKK perpetrates attacks against civilians and the security forces in Turkey, their operatives in Afrin are known to plan and launch attacks in southern provinces such as Adana and Antalya. In order to prevent future attacks, Turkish officials maintain, YPG forces must be removed from Afrin.

Another likely target is Manbij, a predominantly-Arab city located on the western bank of Euphrates River, which was seized by the YPG last year amid tensions between Turkey and Russia. Upon capturing the area, the PKK's Syrian franchise not only drove the native Arab population away from their lands but also attacked hundreds of civilians last week while they were trying to return to their hometown from Jarablus. Amnesty International, among other human rights advocacy groups, established that the group was committing war crimes by forcibly removing the native population from their homes. In recent months, Ankara repeatedly warned the YPG forces to refrain from crossing the Euphrates to no avail. Believing that the Turkish-backed moderate forces will turn against Manbij after liberating al-Bab, YPG forces have reportedly started digging trenches around the city.The third option on the table is to start marching toward Raqqa. Since Donald Trump's inauguration as U.S. president, Turkey has received strong signs that the new administration wants to repair Washington's strained relationship with Ankara. Last week, President Recep Tayyip Erdoğan spoke with Mr. Trump, offered to launch a joint operation against Raqqa and urged the White House to not cooperate with the YPG, a terrorist group, in the war on terror. Hours later, CIA Director Mike Pompeo arrived at the Turkish capital to talk business.

During Mr. Pompeo's visit, Ankara presented him with its own Raqqa plan, which involves the relocation of FSA units from al-Bab to the terrorist capital. According to senior Turkish officials, Turkey would welcome the participation of Arab fighters affiliated with the Syrian Democratic Forces (SDF) but veto any YPG involvement. People familiar with the Turkish proposal state that both Turkish and U.S. special forces could jointly participate in the mission.

For years, the Obama administration pressured the Turkish government to rethink its policy toward the YPG, which received weapons and ammunition from Washington. Mr. Obama effectively offered cooperation against the PKK in Turkey and promised to keep YPG forces away from Turkish soil in return for Turkey's commitment to not target the YPG. To be clear, Ankara rejected the terms because they knew that the YPG would eventually attack the Turks.

If President Trump refrains from following in Obama's footsteps and agrees to the Turkish plan, it is safe to assume that the Turkish-backed FSA will start marching toward Raqqa in the near future. Since the liberation of Raqqa will presumably take some time, military plans regarding Afrin and Manbij will be shelved for a while. But if Trump decides not to work with Turkey, there is a good chance that FSA troops will be dispatched to either Afrin or Manbij. For now, one thing is clear: Euphrates Shield 2.0 will hurt YPG interests on the ground.
RELATED TOPICS