The dream of Europe is dead 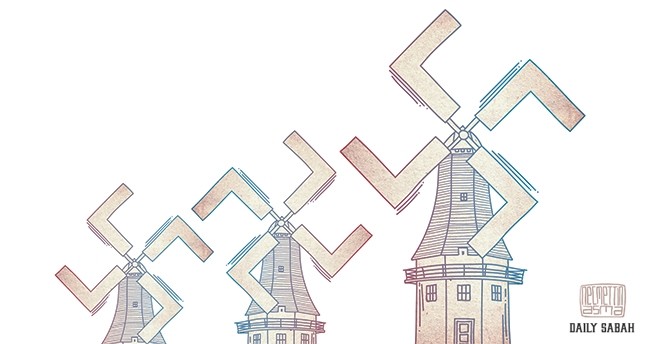 On April 16, Turkey will hold a constitutional referendum, in which Turkish citizens living in Europe and elsewhere will be eligible to vote on the country's future direction. Many people are in favor of the proposed changes. Others oppose the plan.

Here's where things get interesting: The governments of Germany, Austria and the Netherlands have been preventing Turkish politicians, including cabinet ministers, from meeting with Turkish citizens in order to inform them about the proposed changes. In doing so, they not only imposed arbitrary restrictions on free speech but also resorted to mafia tactics.

In Germany, Turkish ministers have been denied access to conference halls where they would meet registered voters. When the organizers signed contracts with private venues, the German authorities sought to intimidate owners by canceling their permits. In other cases, flags and signs were identified as fire hazards and taken away. Plainclothes policemen accompanied uniformed officials as venues were shut down.

Where the German authorities failed, members of the PKK, a terrorist organization with significant influence in the country, rushed to their help and threatened owners of event spaces who agreed to host Turkish ministers. In Hamburg, a private venue was raided by PKK supporters and damaged in the attack. Unsurprisingly, the federal government has a convenient way of denying responsibility. Municipalities, federal officials insists, are the ultimate authority on event cancellations. But everybody knows that the decision is made at the very top – in the office of Chancellor Angela Merkel. Keeping in mind that the German government resorts to mafia tactics, is it unfair to claim that Germany has become a mafia state?

Over the weekend, the Dutch government followed suit and denied landing rights to Foreign Minister Mevlüt Çavuşoğlu's jet in order to prevent him from meeting Turkish citizens living in the Netherlands. To be clear, the decision to ban the foreign minister of a NATO ally was nothing short of a diplomatic scandal. Hours later, things took a turn for the worse, as Family and Social Policy Minister Fatma Betül Sayan Kaya's convoy was stopped by Dutch police on the way from Germany to the Netherlands. The Turkish minister was subsequently denied access to the Turkish consulate in Rotterdam. Gathering outside the diplomatic mission to protest the Dutch government's treatment of Sayan Kaya, peaceful demonstrators were attacked by the police. A number of people, including journalists, were injured by the security forces. In order to stop the Turkish minister from speaking up, the Netherlands declared a state of emergency in the area.

The main question, of course, is why the governments of Germany, Austria and the Netherlands would take such scandalous steps. There are two reasons: First, they absolutely do not want the "yes" campaign to win on April 16 and therefore stop supporters of constitutional reform from campaigning within their borders.

Another important factor is a series of upcoming elections in Europe. In September, millions of German people will go to the polls for a parliamentary election. Later this week, a critical election will take place in the Netherlands. In both countries, the far-right has been becoming more popular at the expense of the incumbents as racism and xenophobia reach a critical level. In order to appease far-right voters, Dutch and German politicians alike seek to antagonize Turkey publicly in order to cut their losses. In other words, the whole episode boils down to populism.

Ironically, European politicians proved willing to undermine freedom of speech, a fundamental democratic principle, in order to score political points and win votes – which means that they are prepared to violate the European Union's core values for the sake of their own interests. The message they sent to the world is clear: Europe has become a continent of hypocrisy and arbitrary practices. While Germany surrenders to the neo-Nazis, proud fascists like Geert Wilders call the shots in the Netherlands.

Dıd Europe not behave the same way when the refugee crisis broke out? Didn't almost every EU member fail to respect the right to life, live up to their commitment to help the less fortunate and uphold the principle of solidarity? Even if the Europeans themselves turned the other way, the world won't forget how the Hungarians treated war victims or that the French authorities placed large rocks under bridges in order to deny refugees a place to survive the winter.

Today, the European Union faces a crisis on an unprecedented scale. It started with the European debt crisis and became a political issue as the United Kingdom opted to leave the organization. Finally, Europe's mistreatment of refugees and reckless attacks against free speech triggered a crisis of ethics. To nobody's surprise, the EU is becoming less attractive – politically and morally. Europe's mask is off. Its makeup is washed out. The dream of Europe is dead. And Turks need to start thinking about emancipating themselves from the burden of Europe.