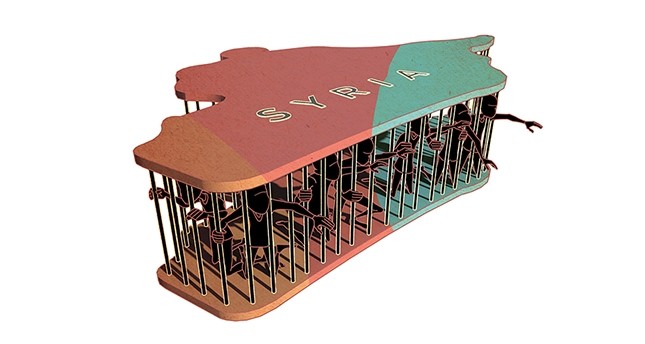 Ankara continues taking steps aganist the danger of the YPG terrorist group while Moscow has given the green light to Turkey's plan. Yet, the U.S. is still failing to compherend what's going on in the region

Interesting things are happening in Syria. Recently, the United States downed a Syrian jet east of Raqqa citing threats against its local partners, the People's Protection Units (YPG) terrorist group, which currently operates under the name, the Syrian Democratic Forces (SDF). The following day, Russia issued a strongly worded statement in protest and argued that the problem wasn't the Assad regime but the SDF-YPG's efforts to expand its territories outside Raqqa. To make matters worse, the Russians said the U.S. had not shared information with Moscow using the communication channels set up by the two countries prior to downing the jet.

Russia's response was to shut down the line of communication with Washington – which was intended to avoid "accidents" on the ground. It also signaled that coalition jets operating west of the Euphrates River would be considered a threat. The U.S. argued that it had no interest in a confrontation with any party except terrorist groups, but would protect its local partners against attacks nonetheless.

Although the communication channels between Russia and the U.S. were re-opened last week, the situation at hand is unprecedented in the seven-year history of the Syrian civil war. Today, the U.S. is paying the price for the YPG's expansionism by experiencing tensions with Moscow. To be clear, though, Washington's partnership with the SDF-YPG will come at an even heavier price – especially in America's relations with Turkey.

The Turkish government considers the YPG, which forms the SDF's core, as the Syrian franchise of the PKK terrorist group. Washington's support for the group became a hot-topic issue ahead of the Raqqa operation. U.S. officials conceded the point that they were indeed arming YPG militants, but pledged to take certain steps in an effort to mitigate Turkey's concerns. In addition to taking back the weapons provided to the YPG after the Raqqa operation, Washington promised to share the serial numbers of weapons delivered to the group with the Turkish authorities and to station Arab SDF fighters in Raqqa. To be clear, it is unclear how effective the U.S. effort to appease the Turks will be. After all, the U.S. made a number of promises to Turkey about the SDF-YPG but did not feel the need to keep them.

Moreover, some progress has been made in the Astana process, which was jointly launched by Turkey and Russia in order to facilitate peace talks in Syria. It is noteworthy that a senior Russian official recently declared that the civil war was already over – which means that a certain equilibrium has been reached in the conflict-ridden country. Recent statements by İbrahim Kalın, the spokesman for the Turkish presidency, about the de-conflicting zones should be considered in the same context: Noting that a trilateral mechanism had been set up by Turkey, Russia and Iran regarding the de-conflicting zones, Kalın announced that technical talks were underway to establish which countries would form the peacekeeping forces between the regime and the Syrian opposition, how many troops would be committed to the force and how they would operate. "We are working on a mechanism that will probably involve Turkey and the Russians in Idlib, Russians and Iranians around Damascus and Jordanians and Americans in the Daraa area in the south," he added.

As the situation in Syria becomes more stable, the SDF-YPG forces are trying to take certain steps outside the scope of the Raqqa operation in order to seize more territory and get a seat at the negotiating table. The downing of a Syrian jet by the U.S. was one of the consequences of the group's actions. Nor does the SDF-YPG intend to stay there. In recent weeks, they launched attacks against the Azaz-Mare area, which is controlled by the Free Syrian Army (FSA). In recent days, a number of civilians, including children, have lost their lives as a result of artillery fire against the town center.

What lies ahead? For some time, Turkey has been moving troops and weapons to Kilis, which is located just north of Azaz-Mare – which is east of the YPG-controlled area of Afrin. Meanwhile, Idlib, where Turks and Russians are planning to enforce the de-conflicting zone, is south of Afrin. In other words, Turkey will have to prevent YPG attacks against Azaz-Mare and protect its troops stationed in Idlib by pacifying the YPG elements in Afrin. It remains to be seen whether the military build-up in Kilis is limited to the de-conflicting zone in Idlib or part of a broader plan involving Afrin.