Are Europe's Muslims the new Jews? 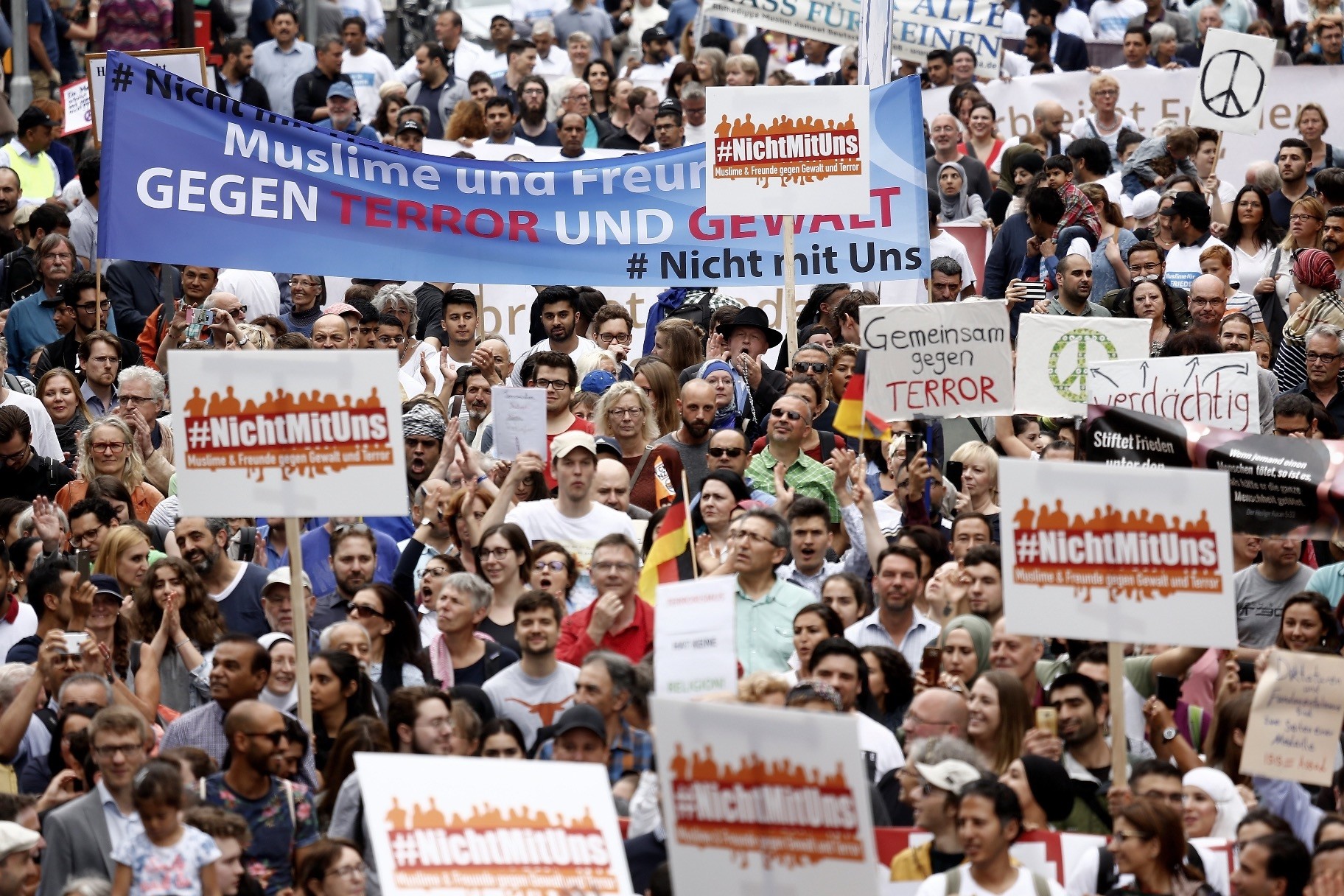 Participants carry a banner reading u201cMuslims and Friends against Terror and Violenceu201d as they take part u201cThe Not With Usu201d rally against the rising anti-Islam sentiment and extremism in Cologne, Germany, June 17.
by Yahya Bostan Jul 03, 2017 12:00 am

It is important for European leaders to call it as they see it: Muslims are facing the same kind of problems today that the European Jewry experienced before World War II

In recent years, European leaders have made a serious mistake by failing to help Turkey combat terrorist threats emanating from Syria and Iraq. The problems weren't real, they wanted to believe, unless the fire burning in the Middle East spread to the old continent. Encouraged by this false sense of security, they focused their efforts on keeping the threats away from Europe instead of putting out the fire in the conflict zone. They did not strive for the replacement of Bashar Assad's regime with a democratic government. By extension, they argued that the refugee crisis was the problem of Syria's neighbors. "If we just stay away," they argued, "the fire won't burn us." Boy, they were wrong.

In the end, European countries found themselves faced with a massive influx of refugees. To be clear, the number of people who ended up in Europe were insignificant compared to the millions hosted by countries like Turkey and Jordan, but it was enough to break them. Overnight, the newspapers started pushing a racist narrative as local governments implemented policies that amounted to serious human rights violations. Meanwhile, terror attacks perpetrated by Daesh affected the lives of ordinary citizens, which – combined with economic hardship and unemployment — created a toxic mix of social tensions also known as right-wing extremism and xenophobia.

Although the problem is quite real, European governments have proved inept at managing the crisis. At this point, European leaders consider right-wing extremists a sizable voter bloc as opposed to a problem. Instead of keeping extremists under control, politicians have been pouring fuel on the fire by adopting their language – which is the actual threat facing Europe today.

The results of the misguided policies are hard to miss, as violent assaults against European Muslims have been on the rise for some time. As a matter of fact, the extremists just stepped up their efforts to target the Muslim community by perpetrating terror attacks against innocent people. Last month, 47-year-old Darren Osborne drove a van into a group of worshipers leaving a mosque in the United Kingdom, killing one person and injuring another 10. According to eyewitness accounts, the assailant screamed "I want to kill all Muslims" during the attack. He was apprehended by the crowd and handed over to the police.

Unfortunately, the British police and media quickly identified the deadly assault as a "lone wolf attack" instead of what it was – an act of terrorism. Following the Finsbury Park mosque attack, the U.K. authorities ordered a de facto media blackout and received the voluntary support of British news outlets. In other words, both the British government and media opted to ignore the issue. Sadly enough, looking the other way doesn't make the problem go away. Quite the contrary, it becomes deeper and more widespread in the absence of scrutiny.

A case in point was the subsequent attack in Creteil, a suburb of the French capital Paris, where a right-wing extremist drove his car into a crowd of Muslims outside a local mosque. According to the French police, the 43-year-old man fled the scene after failing to drive over the roadside barriers. Apprehended in his apartment, the assailant told the authorities that he wanted to avenge the Daesh attacks in France.

The fact that innocent people in London and Paris became the target of similar attacks within days of each other should ring alarm bells in Europe. To be clear, ignoring the threat won't make it go away. As a matter of fact, this sickness can change the future of Europe if left untreated. To make matters worse, it would appear that homegrown extremism in the old continent has evolved into a new form of terrorism. Driving vehicles into crowds has been spreading like wildfire among European racists and placing innocent lives at risk.

It is important for European leaders to call it as they see it: Muslims are facing the same kind of problems today that the European Jewry experienced before World War II. Without further delay, European politicians must abandon their policy of appeasement and start looking for a solution before right-wing extremists end up planning the next Holocaust.