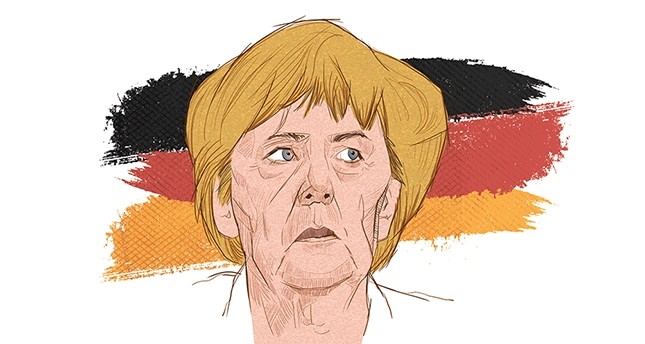 In an effort to keep the European Union together, Germany is trying to invent an imaginary enemy outside Europe's borders, and they desperately want to portray Turkey as the boogeyman next door

The deep-running problems in Turkey's relations with Germany have been visible for some time. For months, Turkish and German officials had been engaged in a war of words. At some point, though, the problems became so serious that Ankara and Berlin felt obliged to take diplomatic measures against each other. Germany's refusal to allow supporters of constitutional reform to campaign within its borders ahead of the April 2017 referendum in Turkey, coupled with Berlin's efforts to compel other European governments to follow suit, was followed by Ankara's refusal to allow German parliamentarians to visit their troops stationed at İncirlik Air Base. Over the following weeks, Germany withdrew its forces from İncirlik and doubled down by imposing a veiled arms embargo on Turkey.

The German government's threats to impose economic sanctions on Turkey further fueled tensions between the two countries. Needless to say, German companies largely ignored Berlin's threats to participate in (and win) a high-profile wind energy contract in Turkey. Finally, Turkey sent a diplomatic note to Germany to demand the extradition of Adil Öksüz, the right-hand man of Fetullah Gülen – mastermind behind last summer's coup attempt – who went missing after the failed coup, citing media reports about his whereabouts. Later the same day, German Chancellor Angela Merkel further strained relations by announcing that her government would block negotiations on the customs union until tensions with Ankara abate.

But what is the reason behind the tensions between Turkey and Germany? Why have two countries whose diplomatic ties go back centuries reached a breaking point? In other words, why does Germany hate Turkey? Why does the German government treat Turkey with such diplomatic intolerance and rudeness only fit for enemies?

According to policymakers in Ankara, Germany's aggression is part of an ongoing election campaign. German politicians are trying to fuel anti-Turkish and anti-Muslim sentiments, Ankara believes, in order to win over far-right and even fascist voters, which was what happened in the Netherlands a few months back. But does this explanation alone account for Germany's hostile attitude on Turkey? Could a group of politicians provide shelter to more than 4,000 PKK members and murderers who participated in the failed coup to win votes in Germany, which the world thinks respects the rule of law? Isn't it the worst kept secret in Europe that Germany strong-armed the Greek government to grant asylum to coup plotters who escaped to Athens in a military helicopter after the coup failed? In other words, there simply have to be other reasons behind Germany's hostility toward Turkey.Spokesmen for the German government, in turn, blame their country's problems with Turkey on the so-called shortcomings of Turkish democracy. If we are to account for tensions between Berlin and Ankara with reference to this supposed democratic deficit, why does Ankara not experience the same kind of problems with, say, France? Do German politicians suggest that French President Emmanuel Macron is not as committed to democracy as the German chancellor? Or, to borrow an example from fellow Daily Sabah columnist Mahmut Övür, do German officials seriously expect us to believe that their government, which rolled out a red carpet for the Egyptian dictator Abdel-Fattah el-Sissi, genuinely cares about democracy?

Germany, which proudly hosts PKK terrorists and Gülen's coup plotters and threatens economic sanctions against Turkey, must have other goals. Blaming the current situation on the German elections does not cut it. After all, the German government is not being temporarily hostile toward Turkey. Its rigid anti-Turkey policy rests on long-term strategic priorities. Otherwise, it would be impossible to account for Berlin's desperate efforts to protect FETÖ at a time when Britain, which is in the process of leaving the European Union, publicly holds the group responsible for the thwarted coup. A better explanation is that policymakers in Berlin consider FETÖ a useful tool against Turkey.

And which strategic goals lie behind Germany's hatred of Turkey? There is no clear explanation yet. But the following case can be made: In an effort to keep the European Union together, Germany is trying to invent an imaginary enemy outside Europe's borders, and they desperately want to portray Turkey as the boogeyman next door.