A road map to defuse the Turkey-US crisis 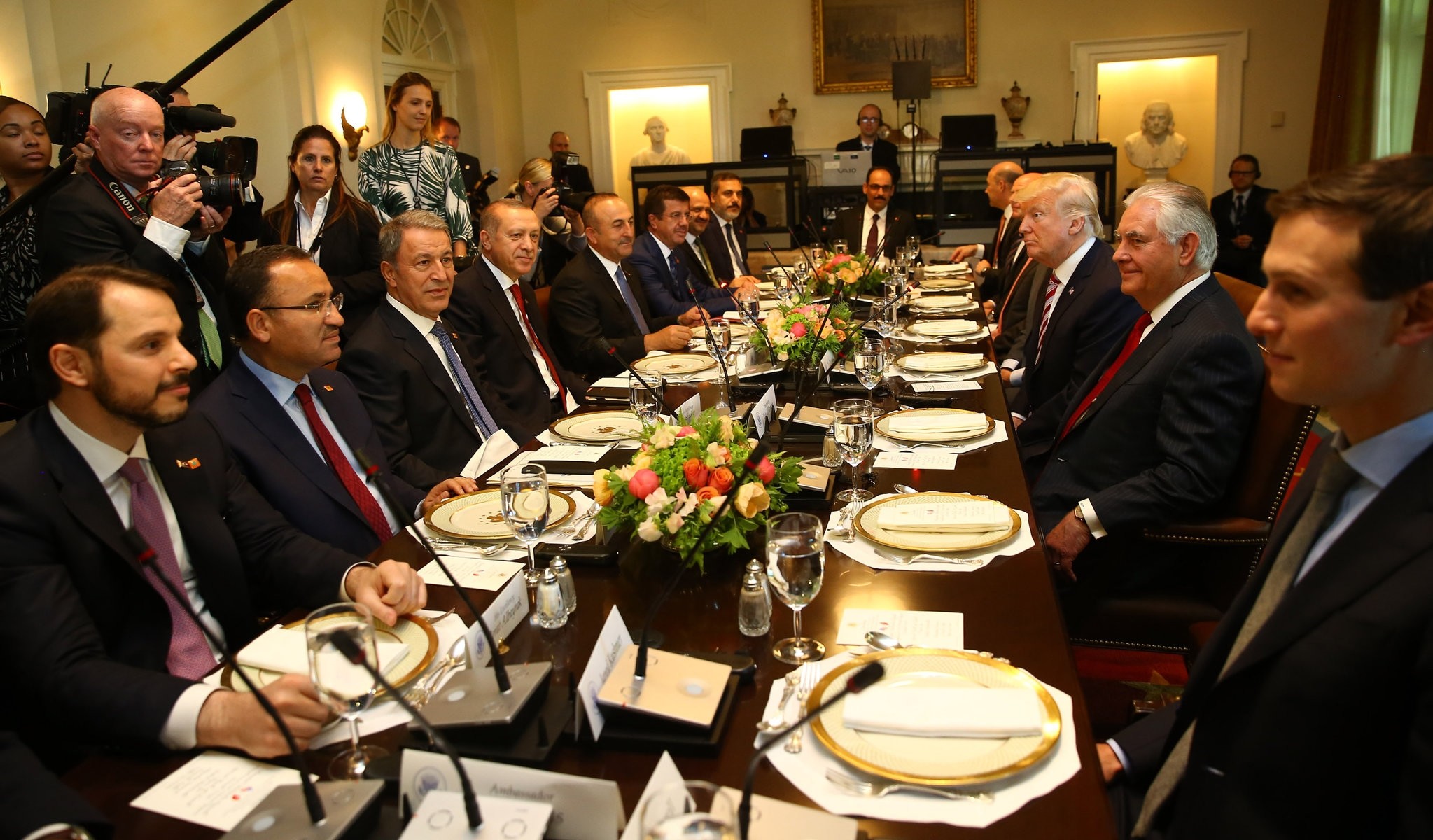 President Erdou011fan, U.S. President Trump and their delegations prepare to have lunch before a meeting on bilateral relations and mutual cooperation on regional issues, in the Cabinet Room of the White House, May 16.
by Yahya Bostan Aug 06, 2018 12:00 am

The frozen Turkish-U.S. ties can be thawed provided that the U.S. president does not allow some controversial members of his team to manipulate him on Turkey's reality and demands

In the 1940s, Turkey was a country with a weak economy, a virtually non-existent industry and no technology. Its population was quite small. The young republic, which was built on the massive rubble of the Ottoman Empire, strived to create a new state and society. Those efforts were hindered by World War II, as Turkey, which did not join the fight, was crushed by its economic side effects.

In the late 1940s, when the Soviet Union, now Turkey's neighbor to the north, asked the Turkish government to hand over some of its territory, Ankara lacked the power to resist Moscow. Under the circumstances, it desperately needed to form new alliances and find new friends to keep the Soviets in check. In this sense, the United States and the newly-emerging NATO, or, more broadly, the Western alliance, was Turkey's best bet. At the same time, the United States needed Turkey's help to prevent southward Soviet advances and contain Moscow's influence. Although the relationship was based on mutual interest, Turkey, then a weak country, was dependent on the U.S. and NATO.

Despite its dependence on Washington, the Turkish government did not completely disregard its national interests when they clashed with U.S. goals – even at the height of the Cold War. Many examples immediately come to mind. For example, the Turks carried out a military campaign in Cyprus in 1974 despite U.S. objections. Around the same time, Turkey-U.S. relations were strained by an "opium crisis." As a result of those disagreements, the United States imposed sanctions on Turkey.

In other words, Turkey protected its national interests even during the Cold War, when it was weak and completely dependent on Washington. It continued to pursue its goals despite U.S. objections and, eventually, economic sanctions.

What about now? The Cold War is over. That is water under the bridge. Turkey strengthened its economy, increased exports and improved its technology and industry. Today, it is one of few countries that manufacture armed drones. There are several nuclear power plants currently under construction in Turkey. The country's population has grown and its human capital has increased. Its military is one of the finest fighting forces in the world. Having escaped the straitjacket of the Cold War, Ankara strengthened its diplomatic relations with countries like Russia and China. In the Middle East and the Balkans, it came to hold a certain level of soft power.

Although the world has washed off the stain of the Cold War and major changes have taken place since then, the United States expects Turkey to act like it's still 1960. Washington refuses to treat Ankara as its equal and instead demands that the Turks ignore their vital interests in order to look out for U.S. interests. To say the least, this is an unreasonable expectation.

To make matters worse, the United States continues to harbor Fetullah Gülen, who was the mastermind behind the July 15, 2016 coup attempt in Turkey. In northern Syria, it continues to partner with the terrorist organization PKK. In recent years, Washington failed to support Turkey's efforts to strengthen its air defenses, yet objected to negotiations between Ankara and Moscow on the S-400 missile defense system.

In addition not keeping its promises to the Turks, the U.S. is has Hakan Atilla, an innocent Turkish citizen, behind bars for evading Washington's unilateral sanctions on Iran – all in violation of international law. Ironically, the same sanctions were lifted by the Obama administration as part of the Iran nuclear deal, from which the Trump administration recently withdrew. Once again, the U.S. urges Turkey not to buy natural gas from Iran, without explaining to the Turks how they are supposed to survive winter without Iranian gas. On top of everything else, Washington now seeks to impose thinly-veiled military and economic sanctions on the Turks for protecting their vital interests in Syria.

The arrest of Andrew Brunson in Turkey followed a series of crises that had been taking place since 2010. To be clear, the crisis between Turkey and the U.S. would have deepened even without Brunson behind bars. After all, the current problems aren't caused by Turkey's actions but Washington's refusal to accept that the Cold War is over and the unipolar world order no longer exists. This relationship will not improve until the U.S. wakes up to this fact and somebody explains to President Donald Trump what is really happening. The world has changed. Failure to accept that fact will only hurt American interests.