World peace, not just Macron's power, is at stake 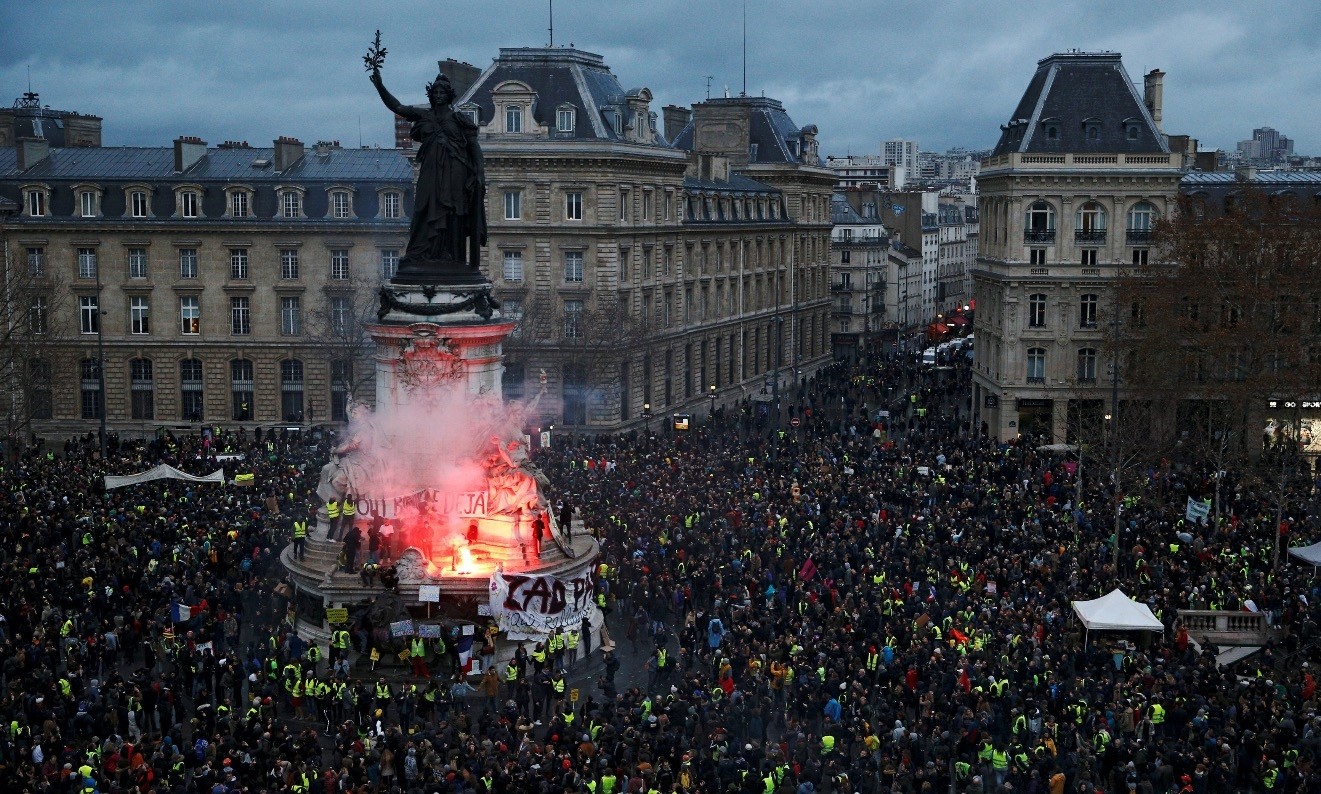 A view of the Place de la Republique as protesters wearing yellow vests gather during a national day of protest by the ,yellow vests, movement in Paris, France, Dec. 8.
by Yahya Bostan Dec 10, 2018 12:00 am

The violent riots in France are not independent from other massive conflicts going on around the world; therefore, what is currently at risk is not only Macron's position but the future of world peace

The violent protests and demonstrations sweeping the streets of Paris may have been fueled by a deep frustration with French President Emmanuel Macron's tax policy. Yet the riots aren't just about Macron's condescension, selfishness or rich-friendly economic policies. A range of deeply-rooted problems underlies the social explosion in France, where the police and the gilets jaunes, or "yellow vests," found themselves entangled in a shameful amount of violence.

At the heart of what is happening lies a deep rupture in global geopolitics. The Western-centric notion of a unipolar world no longer applies to the facts on the ground.

The Western hegemony on the economy, defense technology, the arts and science has all but disappeared, as non-Western emerging powers began to claim a greater share of the pie. Countries like China, India and Russia became more prominent players at the global level. At the same time, Turkey and others emerged as regional heavyweights.

The situation in Syria must be analyzed carefully from that perspective. The civil war there has been underway for years and the end is not yet in sight. The conflict is perpetuated by the inability of the United States and Russia to determine its course. To make progress in Syria, not only Russia and the United States but also Turkey and Iran must be included in whatever arrangement will be made.

In recent years, this multipolar world order has entailed various diplomatic, political and economic crises. The global economy is officially out of control. As Chinese tech giants dethrone their Western competitors, the West experiences an economic slowdown and, by extension, an impulse to crack down on rising powers.

Faced with the prospect of recession, Western governments have imposed an additional tax burden on their citizens, whose loss of disposable income propelled the rise of xenophobia and far-right extremism. Those trends have unmistakably influenced U.S. politics as well as the politics of the European Union, Donald Trump's surprise victory in the 2016 U.S. presidential election and the unprecedented performance of far-right movements across Europe, where they won elections or became coalition partners, reflects that development.

The case of Donald Trump deserves particularly close attention. Over the past two years, the U.S. president emerged as a destroyer of democratic, civic traditions. He treated refugees like terrorists, attempted to bully private companies into investing in the United States, and made it clear that he was interested in nothing but the well-being of American citizens. In this regard, Trump's selfishness translated into a willingness to turn the rest of the world into hell and to weaponize global trade.

That ego-centrism tends to promote a destructive brand of politics. Last week, the U.S. authorities had Meng Wanzhou, the CFO of Chinese tech giant Huawei, arrested in Canada for allegedly violating Iran sanctions. All other things aside, that move alone proves that the global trade war has entered a new stage. Unless Meng walks free soon, China will be in a position to reciprocate, making the world a less safe place for businesspeople. The free movement of capital was one thing. We are now faced with the possibility that capital holders themselves won't be able to move freely.

The truth is that the situation in Paris, the brewing trade war, the Syrian conflict and the changes in global geopolitics are all interrelated. In the final analysis, all those developments are rooted in the delegitimization of international law and international organizations. The world has officially been deprived of order. The United Nations and other institutions, on which the world used to rely to enforce the law, have been rendered ineffective by the arbitrary decisions of the U.N. Security Council. The body no longer serves as a mechanism capable of keeping under control the rising racism and popular anger caused by economic developments in Europe. It is unable to stop the war in Syria to address the root causes of illegal immigration. Nor can the United Nations strike a healthy balance between rising powers and superpowers.

It is no secret that no one takes international law seriously anymore. The cover-up of journalist Jamal Khashoggi's brutal murder for the sake of keeping Saudi Crown Prince Mohammed bin Salman is a case in point. At this rate, the future won't exactly be bright. Judging by history, mismanaged anger and the greed of nation states could take the world back to the 1940s. The bells are tolling not just for Emmanuel Macron but for world peace as well.