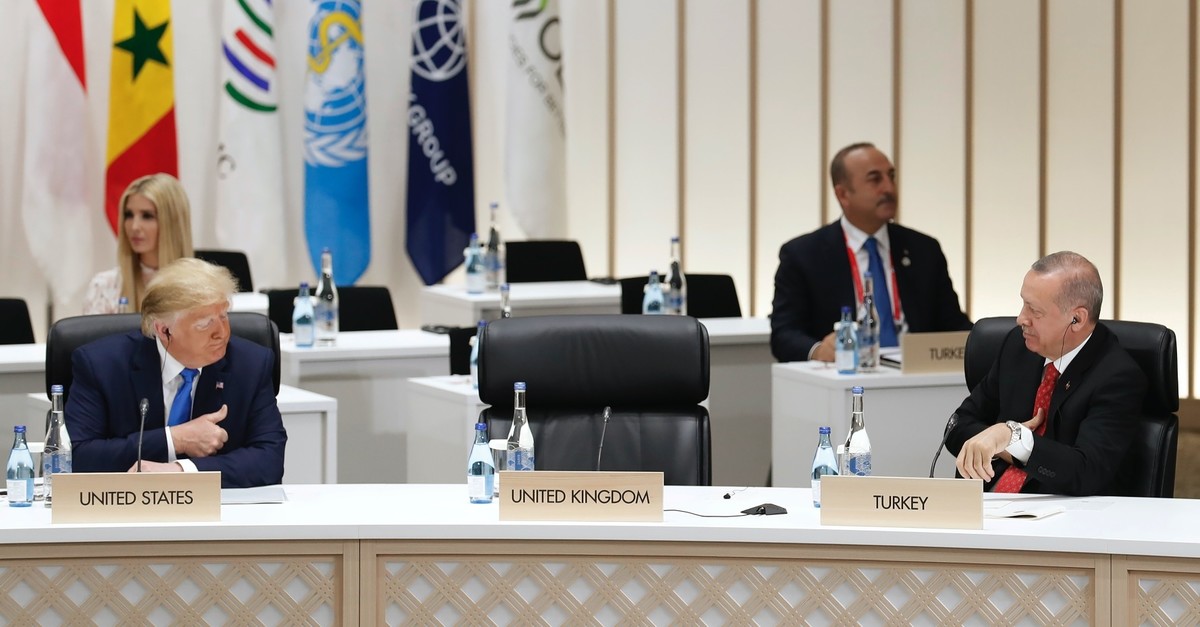 President Recep Tayyip Erdou011fan and U.S President Donald Trump wait for the start of the G20 summit session on womenu2019s workforce participation, the future of work and aging societies in Osaka, Japan, June 29, 2019.
by Yahya Bostan Jul 01, 2019 12:54 am

President Trump seems to find common ground with Turkey on the S-400 dispute by acknowledging past mistakes made by his predecessor; but it is the U.S. Congress that will determine the fate of the issue

I have been covering President Recep Tayyip Erdoğan's visit to Osaka, Japan for the 2019 G20 summit. There were many issues on the agenda including climate change, trade, refugees, immigration and counterterrorism. The leaders discussed those issues at length, yet there were broader matters on the table. G20 summits serve as an important diplomatic platform to facilitate dialogue on pressing bilateral problems. For Turkey, the most crucial meeting was between Erdoğan and U.S. President Donald Trump.

It is no secret that Turkey-U.S. relations have been strained for some time and failure to troubleshoot adds to the cost of existing problems. Back in 2015, Syria was the main area of disagreement between Ankara and Washington due to the Obama administration's failure to enforce its "red line" despite the Assad regime's use of chemical weapons. The following year, the U.S. started to arm the PKK terrorist organization and its Syrian branch, the People's Protection Units (YPG). At the same time, there was a coup attempt in Turkey, whose mastermind was Fetullah Gülen – a Pennsylvania resident. Washington's harboring of the coup leader took a toll on the relationship. Finally, Turkey demanded the removal of YPG militants from the vicinity of the Turkish-Syrian border.

Washington stalled the Turks by ignoring the problem of the YPG's withdrawal from Manbij. Since then, Turkey's decision to purchase the S-400 air defense system and Washington's move to remove Turkey from the F-35 fighter jet program further strained relations.

Today, the S-400 deal, potential U.S. sanctions and the F-35 dispute are at the top of the bilateral agenda. Hence the curiosity about the outcome of Erdoğan's meeting with Trump. Ahead of Saturday's meeting, Turkish sources noted that they were able to come to terms with the U.S. president, yet expressed concern that he could not follow through with those decisions. Expectations were kept low: Turkey and the U.S. could address those two issues at a later meeting. The Turks did not expect Washington to burn the bridges.

Defying expectations, Saturday's meeting was quite positive. Trump immediately told reporters that the Obama administration had wronged the Turks by refusing to sell them the Patriot defense system. He noted that Ankara moved to buy the Russian equipment upon failing to get one from the United States. Trump's words were noteworthy, as he put Turkey's ill-treatment on the record.

Now that the U.S. president acknowledged past mistakes, there are several questions that need answering: Is Trump playing a double game? Will Washington stop objecting to the S-400 deal? Will Turkey avoid sanctions? What will happen on the F-35 front?

The Turkish delegation did not get the impression that the U.S. president was playing a double game. After all, Trump did not just tell his Turkish counterpart what he thought about the S-400 agreement. He also shared the same view with Russian President Vladimir Putin. Trump told the same thing to both Erdoğan and Putin and this suggests that he has already reached a decision.

Under the circumstances, will the U.S. forego sanctions? In a statement to reporters covering his trip, Erdoğan said that sanctions did not come up in his meeting with Trump. Yet U.S. Congress, not the White House, calls the shots when it comes to sanctions. The Turkish assessment is that Trump will find a middle ground by playing for time and implementing non-damaging clauses alone.

What about the F-35 program? The decision to remove Turkey from the project was political alone. It did not have anything to do with the S-400 agreement. The Pentagon resorted to this measure in an attempt to change Turkey's calculus on the S-400 purchase. According to sources, Trump recognized Turkey's legitimate grievances on this front. After all, the Turks are a project partner that wrotesizable checks to bankroll it. They have lived up to their responsibilities until now. Trump needs to follow through with his positive statements in his meeting with Erdoğan and do the necessary thing. The F-35 issue should no longer be a problem area in Turkey-U.S. relations.