YPG weaponizes Daesh against the West 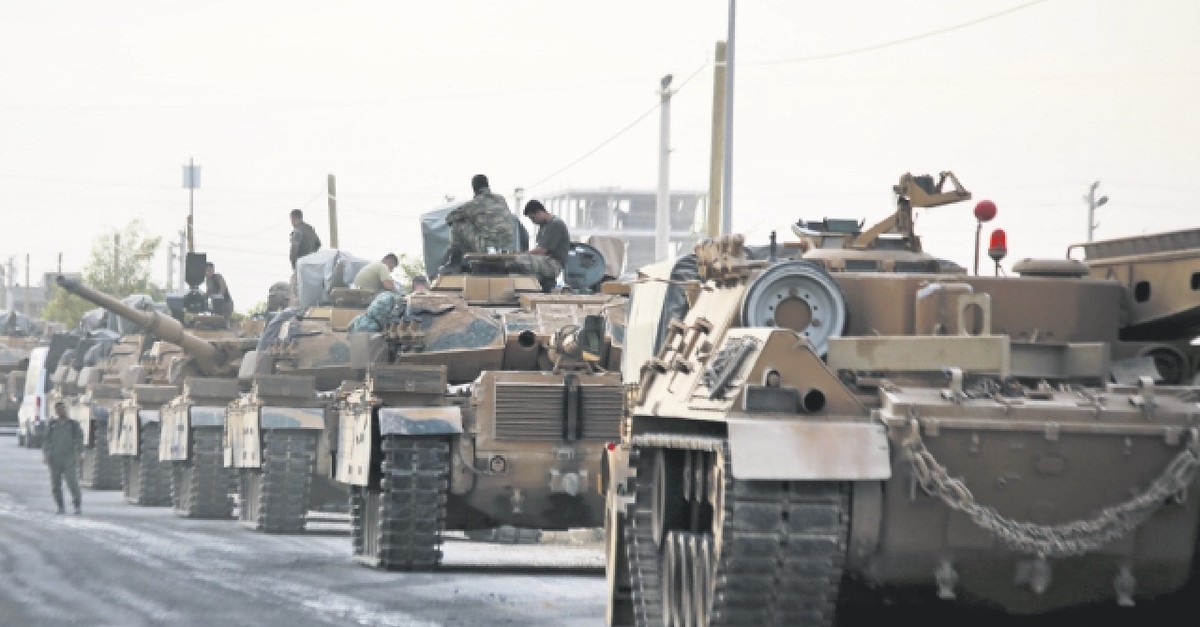 Turkish military vehicles lined up near Aku00e7akale district along the border with Syria as part of Operation Peace Spring against the PKK-linked Peopleu2019s Protection Units (YPG) terrorist elements, Oct. 11, 2019.
by Yahya Bostan Oct 14, 2019 2:04 am

By weaponizing Daesh terrorists in Syria, the PKK is trying to scare the West and gain a trump card against any kind of counterterrorism action in the region

Turkey launched Operation Peace Spring to neutralize the PKK/People's Protection Units (YPG) terror threat in northeastern Syria and push the group some 30 kilometers from the Turkish-Syrian border. This is the top priority. But there is more.

The Turkish government aims to establish a safe zone and resettle some of the 4 million refugees within its borders to this area. Let us recall that some 1 million people from northeastern Syria, the true owners of that territory, currently live in Turkey. If all goes according to the plan, some 1 million refugees will return to their homes in northeastern Syria, mitigating migratory pressures on Turkey and Europe.

No less important is the question of Syria's territorial integrity. The terrorist organization PKK/YPG, which seized control of northeastern Syria, wants to attain autonomy and possibly independence, by taking apart Turkey's southern neighbor. Turkey, in turn, opposes the redrawing of national borders in its neighborhood for a simple reason: Changing the map of the Middle East would lead to fresh instability, new conflicts and chaos. Indeed, the region needs stability and peace, rather than disorder.

Some people are inclined to see Turkey's incursion as an attack on Syria. The Turks, however, have already demonstrated their commitment to the territorial integrity of their neighbors within the context of last year's independence referendum in northern Iraq. Despite working closely with Irbil on the economic and political fronts, Ankara's relations with Baghdad were less than ideal. Still, Turkey did not support Masoud Barzani's attempt at independence. Although northern Iraq offered to join Turkey, the Turks adopted a policy of pressure to oust the Kurdish regional president. Baghdad used to think that Turkey's moves to strengthen its ties to northern Iraq were intended to undermine Iraqi territorial integrity. The independence referendum proved skeptics wrong. Likewise, the Assad regime's reaction to the Turkish incursion indicates that Damascus does not see Turkey as a threat to Syrian territorial integrity.

Turkey's intentions are clear and, as a result of lengthy negotiations, known to all relevant parties. Still, some countries and stakeholders oppose the Turkish incursion. Turkey faces more resistance in the United States than anywhere else. U.S. President Donald Trump faces immense pressure, as the European Union and Saudi Arabia, which assassinated a journalist in its consulate last year, join the anti-Turkey bloc. To nobody's surprise, Iran, too, finds itself on the same side as Israel when it comes to Turkey. For some reason, countries with conflicting interests, which could easily go to war against each other, end up in each other's corner.

The PKK/YPG terrorists launch their propaganda efforts, knowing that their messages have a receptive audience. The organization's propagandists push two narratives: firstly, they claim that Turkey is targeting civilians. Secondly, they argue that the Turkish incursion will undermine the fight against Daesh by targeting PKK/YPG positions. Pro-PKK social media accounts have been disseminating images purporting to prove that Turkey targets civilians. Yet those images have turned out to be from past conflicts. For example, a fan account for Saleh Muslim, the former Democratic Union Party (PYD) chairman, alleged that Turkey used phosphorus bombs with a photograph apparently taken in 2017 during a counter-Daesh campaign in Raqqa. A reporter for Al Arabiya appeared in front of cameras, standing next to two supposedly dead children. It turns out that the whole thing was staged.

The terrorists also allege that Operation Peace Spring will undermine the fight against Daesh terrorists. They recently released a video purporting to show Daesh militants escaping a detention facility, a PKK/YPG-controlled prison, with no guards in sight. The terrorists knock down the door of their cells, leaving the facility. In truth, those Daesh terrorists did not escape. They were effectively released by PKK/YPG terrorists trying to make a point. Later, the organization released CCTV footage from the detention facility and disseminated it on social media.

The YPG/PKK's main purpose is to scare Westerners with the threat of Daesh and encourage Western governments to take action against Turkey. When you read a story involving Daesh and PKK/YPG, keep the following in mind: The PKK/YPG terrorists are weaponizing Daesh against the West.