Exclusive details of Erdoğan's meeting with Johnson, Merkel and Macron 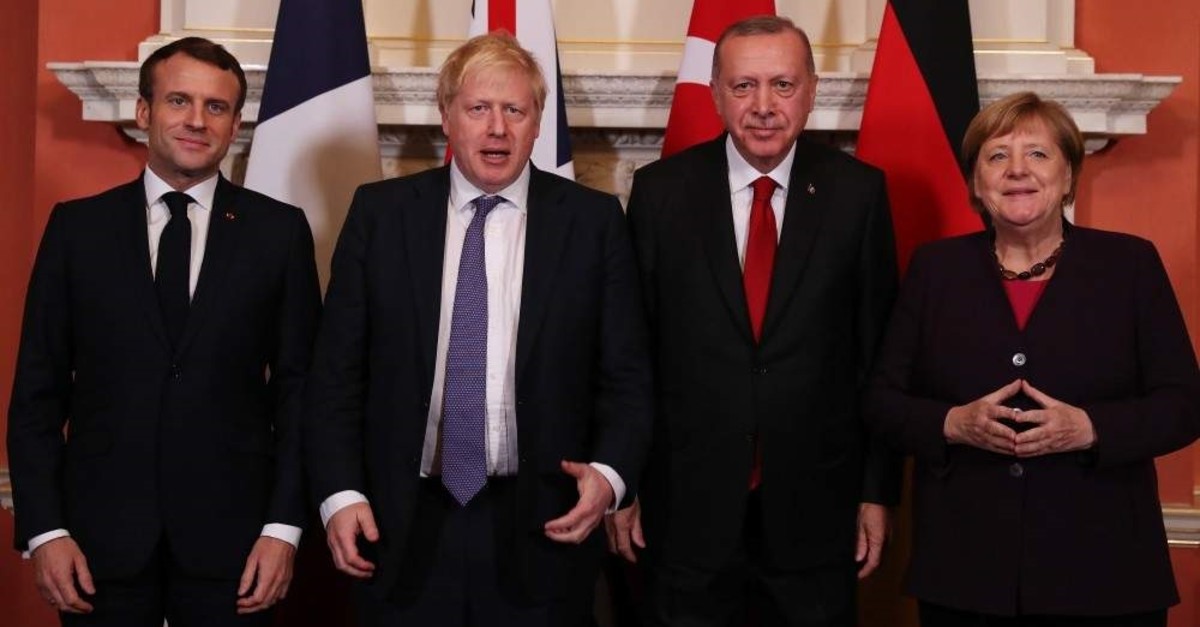 by Yahya Bostan Dec 09, 2019 12:35 am
A day before the NATO leaders’ meeting in London, four world leaders - President Recep Tayyip Erdoğan, British Prime Minister Boris Johnson, German Chancellor Angela Merkel, and French President Emmanuel Macron - gathered to exchange views on Syria. More specifically, they addressed, among other things, the question of the repatriation of Syrian refugees to the area that Turkey’s Operation Peace Spring liberated from terrorists. In today’s column, I will share exclusive information about that four-way meeting at 10 Downing Street.
Prior to and since Operation Peace Spring, Turkey repeatedly asked its European allies to support the Turkish plan for the repatriation of Syrian refugees. Erdoğan asked Europe for help in every one of his public statements on Syria. The Turks say that they spent $40 billion taking care of Syrian refugees, whereas the European Union is yet to disburse the 6 billion euros that it promised three years ago. They warn that Turkey can no longer bear this burden.
As a matter of fact, Erdoğan unveiled his plan to build living spaces for repatriated refugees in northern Syria upon the successful completion of Operation Peace Spring. Turkey has already implemented a similar resettlement plan for refugees in Jarablus and Afrin. According to Turkish officials, it will take approximately $3.5 billion to build a safe haven for refugees in northern Syria. Turkey, they say, shared details of that plan with the relevant countries’ ambassadors and, at international summits, their heads of state.
In other words, Erdoğan’s counterparts already knew what he wanted prior to last week’s meeting. Indeed, the United Kingdom offered to host the four-way meeting in response to Turkey’s repeated requests. The others agreed and the leaders met for 50 minutes ahead of the NATO summit. Provided that Turkey had already shared its plan with the others, the Brits, Germans and French were already up-to-speed. So they talked about the details without much ado.
According to sources, the four leaders exchanged views on the repatriation of refugees as well as the situation in Idlib, the return of European Daesh fighters and the most recent developments in Libya. On his way out of the U.K. prime minister’s office, President Erdoğan told reporters that the meeting went “well.” Turkish officials confirm that the atmosphere was indeed positive. The leaders’ most significant decision, they say, was agreeing to stay in touch. Their next meeting is scheduled to take place in Istanbul next February. Moving forward, the heads of state will meet annually - their foreign ministers, twice, and their special representatives, four times a year.
Erdoğan already shared the following information: During their meeting, one of the European leaders asked the Turkish president when he intended to withdraw from Syria. He responded that Turkey shared a land border with Syria, whereas his counterparts’ countries did not.
“We are under threat and you are not,” Erdoğan told them. “So why are you there?” The Turkish president proceeded to tell reporters that Turkey’s forces would remain in Syria until all “unrelated” countries agreed to leave.
Another item on the leaders’ agenda was sharing the financial burden of hosting Syrian refugees in Turkey. The Turks urged others to assist the establishment of new residential areas in northern Syria, but the other leaders, albeit sympathizing with Ankara, refrained from offering to take concrete steps. If they were to implement the Turkish plan jointly, they said, the United Nations would have to be actively involved and the refugees would have to return voluntarily. Thus the leaders concluded their 50-minute meeting and agreed to raise the issue again in the future. This issue is likely to come up at the Global Refugee Forum in Geneva, Switzerland later this month.
Last Update: Dec 20, 2019 2:14 am
RELATED TOPICS