The lessons of Hanau 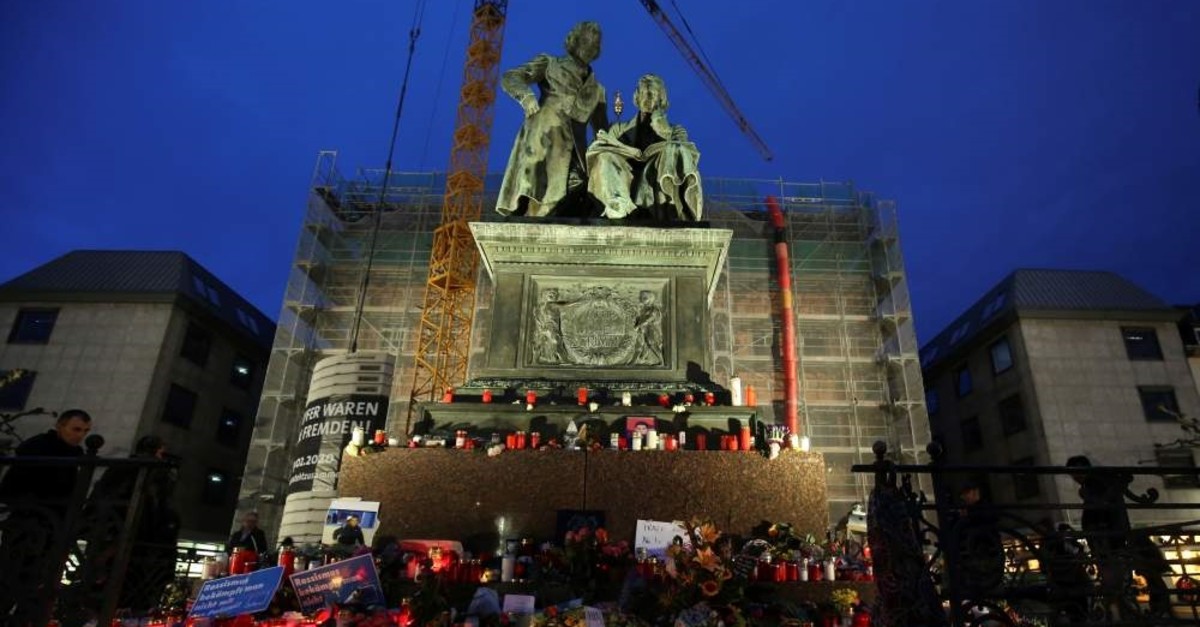 Candles and flowers are placed at the Brothers Grimm monument for the victims of the recent shooting in Hanau, near Frankfurt, Germany, Feb. 22, 2020. (REUTERS Photo)
by Yahya Bostan Feb 24, 2020 1:06 am

A racially motivated massacre in Hanau, Germany claimed nine innocent lives last week. The perpetrator, Tobias Rathjen, carried out armed attacks on two local cafes, killing four Turkish nationals among others. What took place in Hanau was not a surprise. It was an act of terrorism years in the making.

Last week's assault was not the first such xenophobic attack in Europe either. Nor will it be the final massacre in a continent where far-right movements keep getting stronger, politicians resort to discriminatory language on the campaign trail and extremism becomes the new normal. If most European societies consisted of a single ethnic group, racial discrimination may not have been such a serious source of concern. Racism is an important social issue for the future of Europe because the continent is home to a multitude of ethnic and religious groups from Africa, the Middle East, and elsewhere. Europe, therefore, needs to pay due attention to the Hanau attack and take necessary lessons from it.

There are some things about the terrorist's identity that deserves attention. Rathjen was a white-collar worker with a background in banking and management. He spoke fluent English and did not appear to have any serious financial problems. Here's one more thing that should ring alarms everywhere, Germany's security forces had no prior knowledge about Rathjen because he had no criminal record. In other words, there is potentially a new kind of criminal, suffering from the disease of racism, haunting the streets of Europe.

What are the lessons of Hanau? The first lesson is for German and European media. The German media's implicit efforts to protect such criminals effectively encourage far-right terrorism. A quick look at local media reports on the Hanau massacre reveals that the assailant's last name was omitted except for its initial. Had a terrorist with a Middle Eastern background committed the atrocity in Hanau, the world would have learned his name immediately. There is more, I visited the website of Der Spiegel to read the terrorist's manifesto. The magazine ran the story with the image of a single bullet rather than the killer's photograph. Provided that the manifesto's author had just killed nine innocent people, his picture should have reasonably been on the website – which suggests that the German media continues to protect far-right extremists. One more thing, most stories describe Rathjen as "racist" and "far-right" rather than what he really is – a terrorist. We have a responsibility to refer to terrorists as terrorists. Unless the European media's current attitude changes, similar massacres will certainly happen in the future.

The second lesson is for European politicians. Rathjen believed that Islam was a destructive force in the world. His manifesto includes many discriminatory and insulting statements about immigrants and refugees. Let's face it, many European politicians, not just Rathjen the terrorist, embrace such views. Let us think for a second how much anti-Muslim, anti-Turkish and xenophobic rhetoric circulates in Europe around election campaigns. Xenophobia does not go away when those elections end. Even if politicians come to their senses, such views take hold among ordinary people and penetrate the mainstream. Massacres, like last week's rampage in Hanau, are products of such campaigns.

Europe is digging itself into a hole of racism that gets deeper every day. Unfortunately, there seems to be a severe shortage of responsible leaders to reverse this dangerous trend.