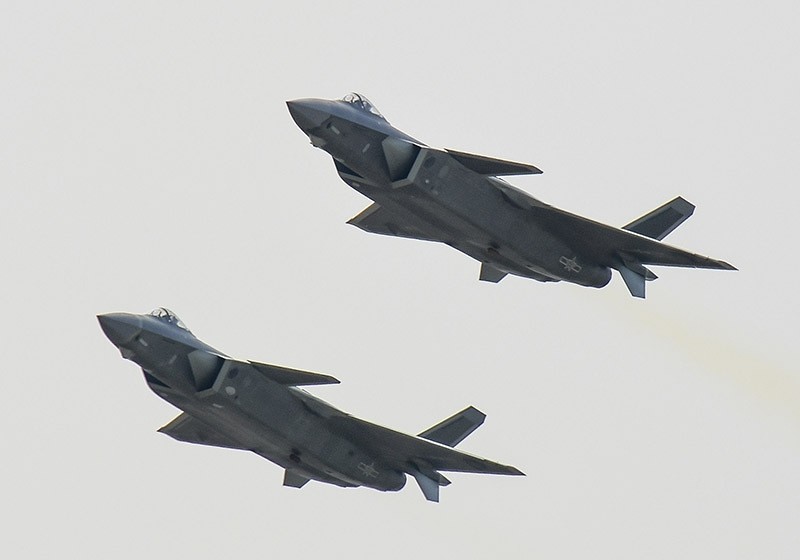 China's J-20 stealth fighter made its public debut at an air show on Tuesday, in the latest sign of the growing sophistication of the country's military technology.

The fifth-generation warplane, which outwardly resembles the Lockheed Martin F-22 Raptor in service with the U.S. military, performed a series of maneuvers under overcast skies at Airshow China in the southern city of Zhuhai.

The long-range J-20, armed with air-to-air missiles, performed its first test flight in 2011 and has been the object of feverish attention by the nation's aviation buffs. At least six prototypes have been produced, according to an annual report on the Chinese military issued by the Pentagon this year.

The Pentagon says a second Chinese stealth fighter under development, the FC-31, is intended for export as a competitor to the U.S. F-35. The FC-31 first flew in 2012 and debuted at Zhuhai in 2014. China is the only country apart from the U.S. to have two concurrent stealth aircraft development programs.

While the planes' stealth capabilities remain a secret, the Pentagon said that China views the technology as key to its transformation from a "predominantly territorial air force to one capable of conducting both offensive and defensive operations."

Air force leaders "believe stealth aircraft provide an offensive operational advantage that denies an adversary the time to mobilize and to conduct defensive operations," said the report, which estimated the two Chinese planes could enter service as early as 2018 and would "significantly improve China's existing fleet of fourth-generation aircraft ... to support regional air superiority and strike operations."

Among other recently developed Chinese aircraft appearing at the weeklong air show is the Y-20 large transport aircraft, with a maximum takeoff weight of around 200 tons. The plane is being introduced into the People's Liberation Army to carry out aerial command-and-control operations and parachute drops.

Also featured is the CH-5 unmanned aerial vehicle, China's largest combat drone, which made its first flight last year and appears to be based on the U.S. MQ-9 reaper.

The country has boosted its defense spending in recent years amid rising tensions with the U.S. and neighboring countries over claims in the South China Sea.
Last Update: Nov 01, 2016 5:14 pm