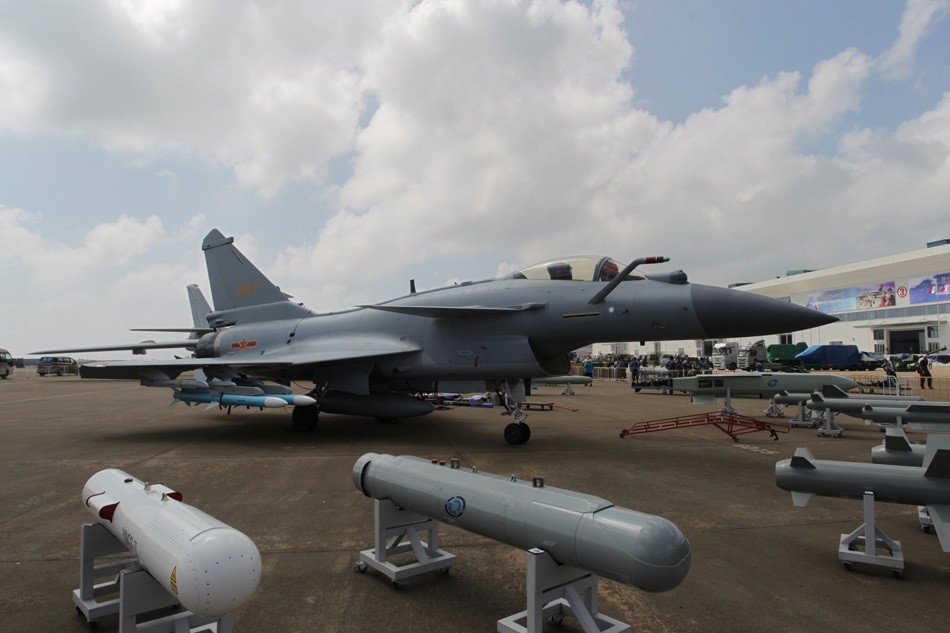 A Chinese J-10B fighter is seen ahead of the China International Aviation and Aerospace Exhibition in Zhuhai, Guangdong province.
by reuters Nov 01, 2016 12:00 am

Analysts say tensions in eastern Europe and Asia are reversing a post-Cold War slump in defence spending, while hawkers of civil and military aircraft will try to drum up new business at aerospace expos this week

From Zhuhai in southern China to Florida, hawkers of civil and military aircraft - and the money to finance them - will try to drum up new business at aerospace expos this week, conscious their high-risk industry is approaching a turning point. After U.S. weapons firms beat profit forecasts, analysts say tensions in eastern Europe and Asia are reversing a post-Cold War slump in defence spending that's good news for military aircraft makers. At the same time, commercial aviation is faltering after record orders in recent years.

"Civil is weakening and turning very spotty in places, whereas defence is growing in U.S. and world markets," said Teal Group consultant Richard Aboulafia. "It's a combination of a re-armament cycle coupled with something of a ramp-up based on regional tensions and fears."

China's biggest aviation event - Airshow China, starting in Zhuhai today - underlines the trend in what is a banner week for the industry. A defence trade show takes place in Jakarta and an air finance conference in Hong Kong, as well as the annual U.S. business jet jamboree in Orlando, Florida.

Topping Airshow China's agenda is the last-minute public debut of the J-20 stealth fighter - a warplane China hopes will narrow a military gap with the United States. Ability to project air power is key for China as it flexes muscles on territorial disputes in the East China and South China seas. It's the second successive edition of the biennial Zhuhai show at which China has pulled the covers off a classified stealth jet, after displaying the export-oriented Shenyang J-31

in 2014. Western analysts say the J-20 moves up a gear in terms of China's ability to punch beyond its territory, though it may lack the clout of its lookalike, the U.S. F-22 Raptor. The Xian Y-20 strategic cargo carrier, similar to the U.S. C-17 aircraft, will also be present.

Another hot topic at Zhuhai will be the outlook for the much-delayed launch of state-owned aircraft maker Comac's 150-seat C919 passenger jetliner - Beijing's civil aerosopace effort to challenge the domination of Airbus Group and Boeing Co. The C919 is currently scheduled to take flight this year, but industry sources say this will slip to 2017.

With more than a million millionaires and over 200 billionaires, China should also be among the most promising markets for private jets. But belt-tightening and Beijing's corruption crackdown have hit demand for large models, which resisted a post-financial crisis drop in industry sales.

Underlining the current divide between civilian and military aviation fortunes, foreign sellers are expected to flock to the Nov. 2-5 Indo Defence arms exhibition in Jakarta, just weeks after Indonesian jets staged exercises on the edge of a South China Sea area claimed by Beijing.

With Indonesia's arms imports up threefold since 2010, according to the Stockholm International Peace Research Institute, competition between suppliers is brutal. Delegates at the event will seek updates on a tentative decision by Indonesia to buy Sukhoi Su-35 fighters from Russia. Rivals Lockheed Martin, Sweden's Saab and owners of Europe's Eurofighter will all attend Indo Defence.
RELATED TOPICS