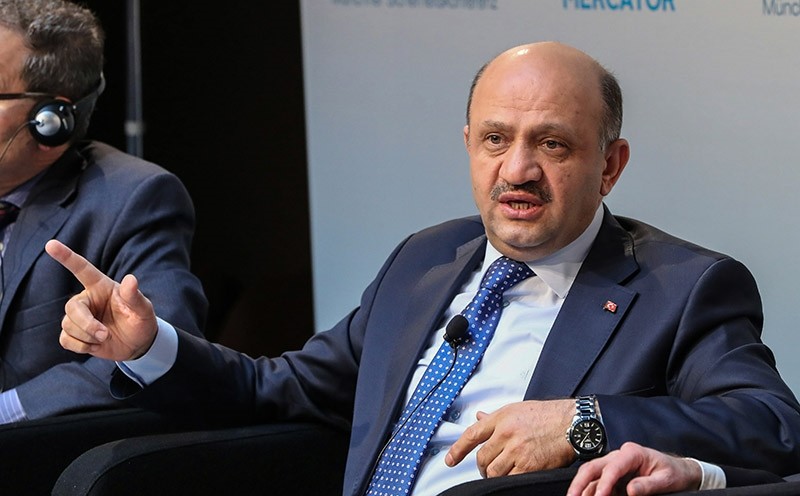 "We had negotiations to purchase missile systems that are produced by NATO countries but we could not get a reasonable offer in terms of price and technology transfer; thus, our negotiations intensified with the Russians," Minister Işık told news channel A Haber in a live broadcast on Thursday.

"There is progress in the discussions," Minister Işık added, however, procurement talks have not been finalized yet.

Minister Işık's remarks came one day after Russian President Vladimir Putin's spokesperson Dmitry Peskov announced that President Recep Tayyip Erdoğan and Putin had discussed this issue during Erdoğan's recent visit to Moscow on March 10, adding that both leaders were interested in the missile sale.

Earlier on Wednesday, Russian newspaper Izvestia reported that talks had advanced to the stage of negotiations regarding price range and financing for the missile system. Also on Tuesday, Russian state corporation Rostec CEO Sergey Chemezov said that Turkey is ready to buy S-400 missile systems from Russia with a loan granted by Moscow.

"Turkey is expressing its wish, they would like to receive a loan," Chemezov told the Rossiya 24 broadcaster. "As soon as an agreement is signed and a decision is made on the amount of the loan, then we will sign a contract for supply, including the S-400."

In fact, the compatibility and integration of non-NATO systems into the NATO infrastructure is a matter of growing interest, though it seems neither NATO nor Russia wants to integrate the defense system into NATO's infrastructure due to concerns about infiltration of technology.

Regarding this issue, Minister Işık clarified that Turkey will use Russian systems without integration to NATO defense systems, noting, ''Russia's S-400 missile systems will not be integrated into the NATO system.''

He added that there were several NATO countries that are already using non-NATO systems.

Minister Işık also said that the Russian missile system will be used to fulfill Turkey's urgent requirement while the country will continue to develop its indigenous missile defense system.

''We [Turkey] have already developed the short-range ballistic missile Hisar and are currently working on the middle-range Hisar project. Development of our own long-range defense system is currently continuing and we will be able to produce these systems within five-to-seven years,'' he said.

Turkey has sought to purchase a long-range air missile defense for years and this issue has been on the international agenda since 2013, when Turkey's Military Procurement Agency, the undersecretariat for the Defense Industry (SSM), chose the China Precision Machinery Import-Export Corporation (CPMIEC) FD-2000 (HQ-9) long-range missile defense system in September 2013.

Even though the Chinese company's offer was the best deal among other competitors in terms of price and technology transfer, Turkey had to cancel this tender due to heavy pressure from NATO in November 2015.

The S-400 missiles are the new generation of the Russian missile system and, so far, Russia has only sold the system to China and India. Last year, both China and India signed an inter-governmental agreement for the procurement of four regiments of Russian-made S-400s. Turkey will be the first NATO-member country to purchase the system, if the country reaches an agreement with Russia for procurement.