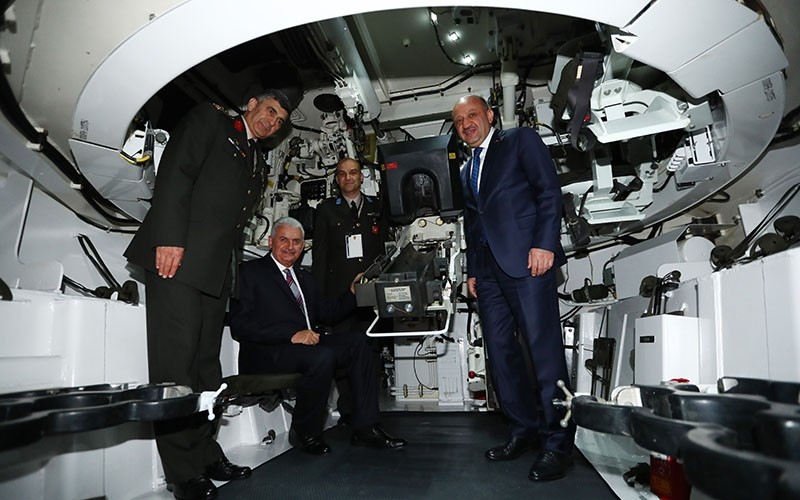 Pointing out the fact that indigenous sourcing in Turkey’s defense industry has exceeded 60 percent, Prime Minister Yıldırım said, 'For democracy and peace, there is a need for more valiant people, states and scientists'

The IDEF'17 showcases the most modern vehicles, equipment and systems in the fields of defense, security, naval, aerospace and space industry.

Prime Minister Binali Yıldırım, in his inaugurating speech at the event, stressed on the issue of fighting against terrorism and said, "We have never looked at any terrorist organization with sympathy nor have we been welcoming towards those who do. Regardless of how and from who the threat comes to our country, whether it comes from inside or out, we will continue to resist them," Yıldırım said.

Stating that all developments in the world closely relate to Turkey because of its strategic position between Asia and Europe, Yıldırım said, "In a world where justice and compassion is waning, the defense of law and safety of life and property has become more important than ever. For democracy, for peace and tranquility and for justice, there is a need for more valiant people, statesmen and scientists."

Yıldırım noted that Turkey has become stronger in the field of defense. Just 15 years ago, Turkey's defense industry was 80 percent externally dependendent, today that rate has dropped below 40 percent. The prime minister revealed that this year they are working on a total of 460 projects with a total budget value of TL 123 billion.

Yıldırım said, "For our security forces on land, we have successfully manufactured defense vehicles such as the Altay tank, armored vehicles and national infantry rifle. We have gained more strength with the Göktürk 1 and Göktürk 2 satellites. We are now in the process of building a national space agency."

National Defense Minister Fikri Işık, on the other hand, said the annual turnover of the Turkish defense industry has approached $6 billion as of the previous year, while exports have reached $1.7 billion. "We are moving forward with strong and confident steps with the aim of becoming one of the 10 most advanced countries in the defense industry," Işık added.

Also speaking at the fair, İsmail Demir, undersecretary for Defense Industries, said global geopolitical developments have changed the definition of security and power concepts in the new strategic environment, adding that in this context, Turkey is proceeding with firm steps on its way to become a leading and guiding country in the international society as well as in the defense and security technologies in line with its 2023 targets, by further developing its existing capabilities and meeting its needs through local and national resources.