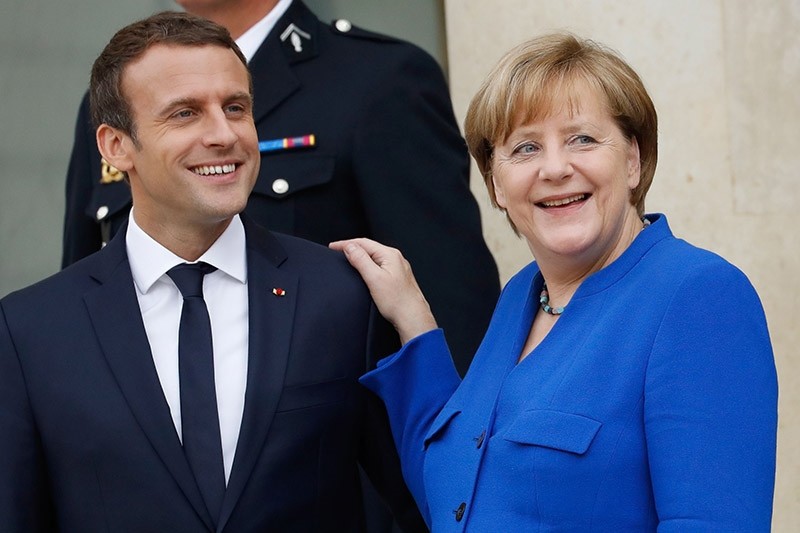 France and Germany agreed Thursday to begin work on a joint fighter jet, a major advance in their relations designed to underline their united front in the face of fracturing Western relations.

Among a host of measures agreed between their economy, culture and education ministers, the joint fighter jet proposal underscored their plans to create a new dynamic in the Franco-German motor at the heart of the European Union.

"The aim of this joint fighter jet project is to do research and development together... to use it together... and to coordinate on exports," Macron said, calling it "a profound revolution."

Europe currently produces two fighter jets, the Rafale manufactured by French arms maker Dassault and the Eurofighter, produced by a consortium of companies from Germany, Britain, Italy and Spain.

Macron also won a commitment from Merkel to support a Paris-backed joint anti-terrorist regional force in Africa called the G5 Sahel made up of soldiers from Burkina Faso, Chad, Mali, Mauritania and Niger.

The two countries also agreed to align their corporate tax policies by the end of the year in a bid to avoid rivaling each other for investment and company headquarters.

Macron, 39, was elected in May promising to create a "Europe that protects" and he is pushing for new measures for the 28-member bloc in defense, trade, immigration and security.

Some of his bigger plans, creating a new common budget for the countries that share the euro and a finance minister for the area, will have to wait until after German elections in September.

"I have nothing against a eurozone budget (and) we can talk about creating a European finance minister," Merkel said ahead of the vote, which her center-right Christian Democratic Union (CDU) is expected to win.

Macron and Merkel also stressed their common position on climate change and trade, issues on which they have major disagreements with US President Donald Trump who also arrived in Paris on Thursday for talks with Macron.

The French leader said Paris and Berlin would "continue to fight on one hand against all types of protectionism and on the other hand against any attempts at dumping."

He also said they were firmly opposed to the decision by Trump to withdraw the United States from the Paris global accord on climate change reached at the end of 2015.

Europe has been alarmed by the prospect of new US tariffs on steel imports, which could hit European manufacturers, while Macron has urged tougher action by the EU against low-cost Chinese imports.

As well as dealing with a radically different transatlantic relationship, the EU is grappling with the fallout from Britain's shock vote to exit the bloc in a referendum in June 2016.

But Brexit, along with perceived threats from Trump, as well as from Russia, has given Europe a renewed sense of purpose.

The blooming Franco-German relationship reflects this new dynamic, but differences are likely ahead.

Macron has warned Germany that it must move to correct the "dysfunctions" of the eurozone and give it "the fate it deserves".

He wants Germany with its large trade surpluses and healthy public accounts to contribute to a eurozone budget which would be used to stimulate growth and investment in weaker members of the bloc with high unemployment.

"I want the eurozone to have more coherence and convergence," Macron said in an interview with Ouest-France newspaper on Thursday.

"France must reform its economy to give it more vigor," he added, but Germany, for its part, "must support a revival of public and private investment in Europe".

The two men and their wives Brigitte and Melania are set to have dinner at the Michelin-starred restaurant in the Eiffel Tower later Thursday.