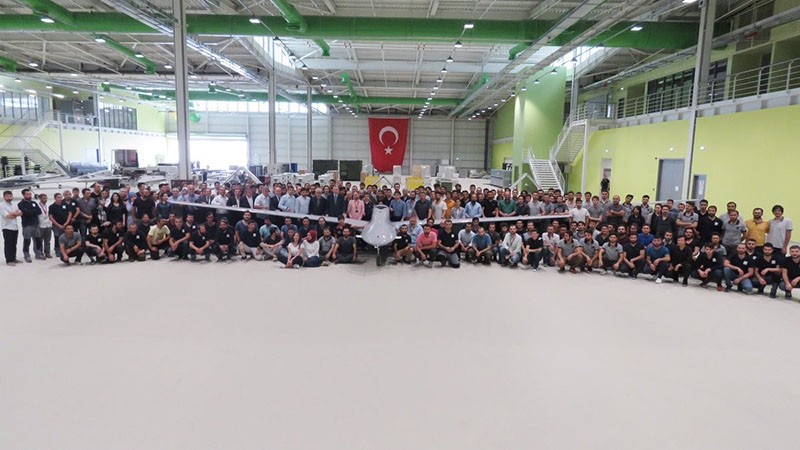 President Recep Tayyip Erdoğan visited late Tuesday the National Unmanned Aerial Vehicle (UAV) Research and Development (R&D) and Production Facility of Baykar Makina in Istanbul, the producer of the Bayraktar TB2 armed UAV, which has been effectively used in the fight against terrorism and has become the nightmare of terrorists, especially the PKK. Showing special interest to the trainees working on the UAV project, Erdoğan urged them to continue working to further improve, while praising the efforts of engineers who took part in the development of the software used in Bayraktar UAV's.

President Erdoğan stressed the importance of the development of national and domestic products for the defense industry, noting that Turkey has made a significant breakthrough in the defense industry especially over the last 15 years. Erdoğan stated that he is pleased with the development of the software, electronics, design and aerodynamic technologies of products such as the UAVs by Turkish engineers, underlining the importance of the software for the national UAV project. "Those of you who have participated in the national development of this crucial technology have proven what this country can accomplish," he said.

President Erdoğan was particularly interested in young trainees working on the national UAV project, pointing out that they will work to expand the range of national and domestic defense industry products in the upcoming period while adding that important duties fall on the private sector and universities in this respect. Providing motivation to the trainees and engineers who took part in the project, Erdoğan advised them to continue working for excellence.

At the end of his visit, Erdoğan posed for a souvenir photo taken in front of the national UAV with the employees of the project.

With breakthroughs made in the defense industry in the past 15 years, Turkey has begun to produce its own UAVs, not only for observational purposes but also as a form of defense. Turkey was the fifth country to produce its own armed UAVs after the U.S., China, Israel and Iran. A total of 30 Bayraktar TB2s, the first national armed UAVs to be produced by Baykar Makine, have been actively used in various operations, including 18 vehicles by the Land Forces Command, six by the Turkish National Police and six by the Gendarmerie General Command. The Bayraktar TB2, an armed UAV that has become a nightmare, especially for the PKK terrorist organization in terrorist operations, has neutralized many terrorists so far. Previously operated during Operation Euphrates Shield, Bayraktar TB2s have carried out a total of 20,000-hour flights to-date. Developed entirely domestically and of original design, the Armed Bayraktar TB2 UAVs use National Intelligent Ammunition (MAM-L) in operations and can strike targets from 8 kilometers away.