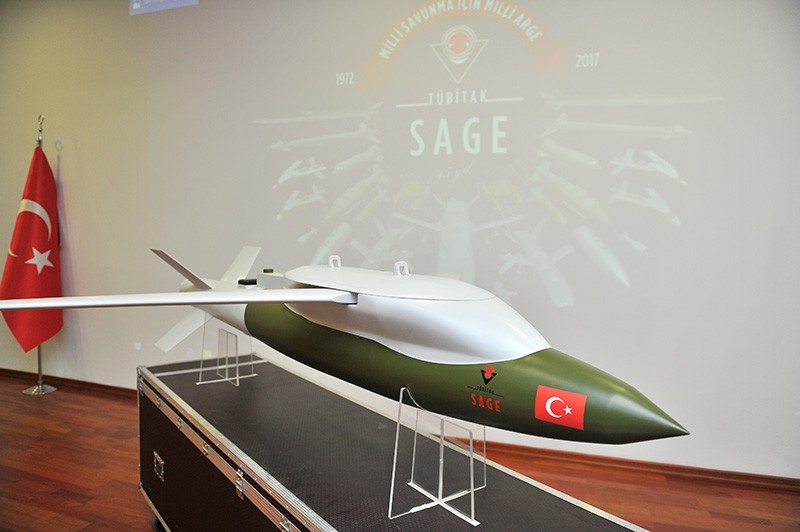 Turkey has introduced a domestically-produced Winged Guiding Kit (KGK), developed by Tu00dcBu0130TAK and produced by ASELSAN. (AA Photo)
by Daily Sabah Dec 05, 2017 12:00 am

Turkey announced the introduction of a new Winged Guiding Kit (KGK) weapon system into its defense arsenal, which has been domestically developed and produced.

Speaking at a ceremony held at the Scientific and Technological Research Council of Turkey (TÜBİTAK), council President Arif Ergin stated that Turkey's ASELSAN Defense Industries has started the mass production of the KGK and the system is now included in Turkey's military arsenal.

The KGK was developed to provide guidance and extended range capability to unguided general purpose bombs dropped from planes. It is capable of guiding long-range ammunition up to 100 km.

Also speaking at the ceremony, ASELSAN Defense Industries Undersecretary Mustafa Şeker emphasized the significance of the domestic development and protection of the new weapon system.

"We have been trying to procure [this system] for years and have negotiated for it over and over again. It is a proud thing that the issue has been solved within our own country."

Pointing out that the project resulted from join efforts of TÜBİTAK's defense research and development institute (SAGE) and ASELSAN, Şeker said,

"The picture we want to see is all here, everyone is in the same frame. It's a big task for us. Our work is continuing at a rapid pace."

He added that Turkey hopes to expand its defense exports, with new developments like KGK.

"After this, our targets will be bigger. Hopefully, both for the defense of our country and for our exports. This will be a project where the real power of Turkey will be appreciated in the world," Ergin said.