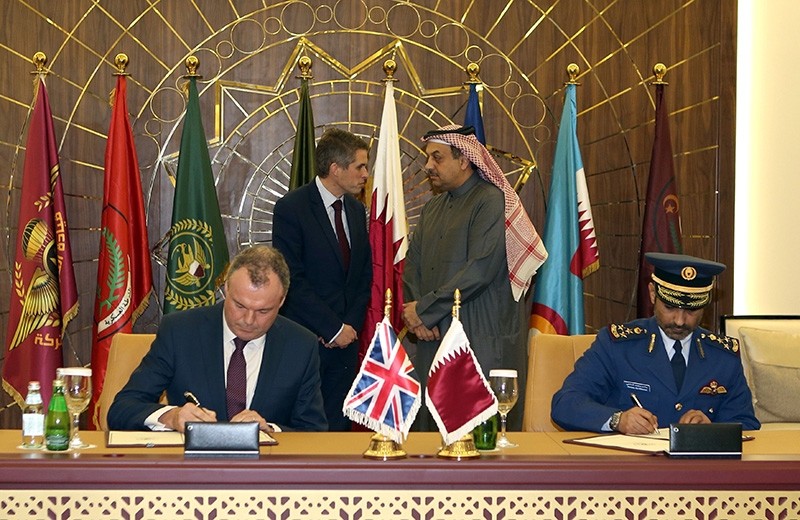 Qatar signed a multi-billion-dollar deal Sunday to buy 24 Typhoon fighters from Britain, its second major defense agreement this week, which comes during the worst political crisis in the region for years.

Williamson said it was the biggest order for Typhoons in a decade, and it follows a billion-dollar deal signed by Qatar on December 7 to buy 12 French Dassault Aviation warplanes.

"These formidable jets will boost the Qatari military's mission to tackle the challenges we both share in the Middle East, supporting stability in the region and delivering security at home," said the British minister.

The deal also includes an intention for Qatar to buy further military equipment from Britain, namely the purchase of Hawk aircraft.

A memorandum of understanding was signed by the two countries for this Typhoon contract in September.

Qatar is the ninth country to sign a deal for Typhoon jets, said London.

A statement from Qatar's armed forces said the two ministers also signed an "agreement for building up a Joint Operational Squadron" between the two countries' air forces to provide security during the 2022 football World Cup, which the Gulf state will host.

Sunday's deal comes at a politically sensitive time for both countries.

There are heightened tensions in the Gulf, where a Saudi-led boycott of Qatar is in its seventh month.

Since June 5, Saudi Arabia, the United Arab Emirates, Bahrain and Egypt have diplomatically isolated Qatar, accusing the emirate of supporting Islamist extremists and of being too close to Shiite Iran, Riyadh's arch-rival.

The four countries also cut off all air and sea links to Qatar.

Qatar denies the allegations and has accused the Saudi-led bloc of aiming to incite regime change in Doha.

It is the latest agreement in a growing list of defense deals signed by Qatar since the crisis erupted.

Doha has also struck deals with the US and Italy as well as France.

For Britain, the deal is notable as well as it searches for major global trade deals during negotiations for its withdrawal from the European Union as Brexit talks continue.

After reaching an initial agreement last Friday on post-Brexit arrangements for citizens' rights and the Irish border, London is now set to begin talks with Brussels on a future trade deal for when Britain is scheduled to leave the EU in 2019.