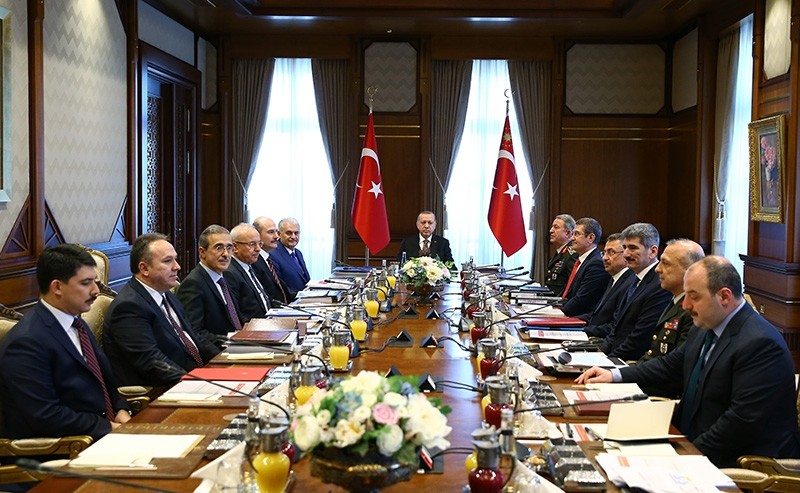 The Defense Industry Executive Committee met Wednesday under the chairmanship of President Recep Tayyip Erdoğan to discuss a weighty agenda, including the operation in Afrin, Syria and the ongoing projects in the defense industry.

The meeting was held at the Presidential Complex and the president chaired the meeting for the first time following a decree announcing that the top defense body will function under the presidency. Prior to the decree, the committee was chaired by the prime minister.

After the meeting -- which was closed to the media and lasted for about seven hours -- Turkish Presidency issued a written statement.

"In the meeting, a total of 55 projects worth $9.4 billion were evaluated," the statement said, adding the committee decided to add "further indigenous and national systems" to help the military in the ongoing Operation Olive Branch in Syria's Afrin.

The bidding process for contract for the Altay tank and the project for the use of 500 tactical wheeled armored vehicles was reportedly discussed. Undersecretariat for the Defense Industry İsmail Demir recently announced that he expects the finalization of the contracting process soon.

The Altay is a third-generation version of the main battle tank and Turkey's first domestic tank development program. The tank was named after army Gen. Fahrettin Altay, who commanded the 5th Cavalry Corps during the Turkish War of Independence.

In a previous meeting of the committee in November, it was announced that 22 projects worth $5 billion will be developed, including a long-range missile defense system, combat helicopters and drones. The committee also mentioned plans to modernize the Turkish Armed Forces (TSK) and develop a structure for the defense industry.