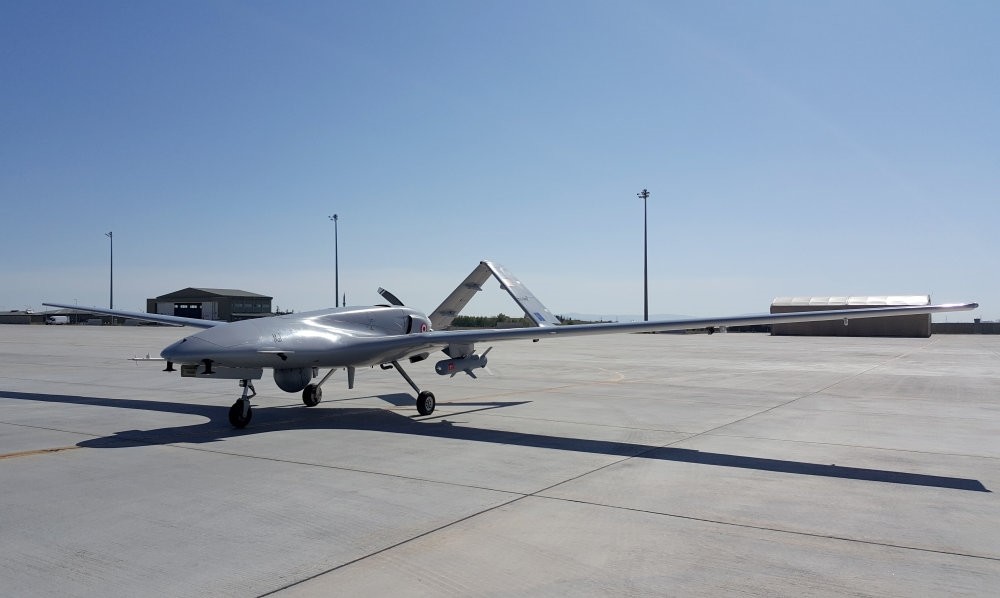 Turkey's domestically developed Baykar TB2 unmanned aerial vehicle was deployed in the Afrin operation to collect visual intelligence and is considered to have widely contributed to the operation's success.
by Daily Sabah with Wires Mar 20, 2018 12:00 am

Now that the Turkish military has taken control over Afrin from YPG, public and private sector representatives have stressed the role of domestically developed defense systems in achieving this success

To secure its borders against the terror threats emanating from northern Syria, Turkey launched Operation Olive Branch on Jan. 20. Today, two months later, the operation is continuing successfully with the Turkish Armed Forces (TSK) and the Free Syrian Army (FSA) recently taking full control of Afrin, an important town in northern Syria for the terrorists, as well as nearby villages. Since the first day of the operation, Turkey has been using, to a significant extent, domestically developed military vehicles, arms and ammunition. Representatives of the national defense industry, academics and bureaucrats have stressed that the success of Operation Olive Branch is thanks to the domestically developed defense systems - including an indigenous radar jammer, the T-155 Fırtına self-propelled howitzers, the Kirpi (a mine-resistant ambush vehicle), multiple rocket launchers, the ATAK Advanced Attack and Tactical Reconnaissance helicopter, precision guided kits and unmanned aerial vehicles.

The defense industry, academics and bureaucrats came together for the SAHA Istanbul Defense and Aerospace Cluster Association'sthird anniversary. The importance of domestic production in the defense industry and the correlation that it has to the success achieved in Operation Olive Branch in Afrin was discussed at the gathering. It was pointed out that some embargo-imposed defense industry products are produced in Turkey.

Representatives of the defense industry also underlined that the rate of localization for Roketsan, a major Turkish weapons manufacturer and defense contractor, increased to 75 percent.

Speaking at the meeting, the Undersecretary for Defense Industries (SSM) Dr. Ismail Demir stated that Turkey has defense companies in the world's top 100 in terms of the defense industry pyramid, but that there are no companies entering the central part of that pyramid.

"The army now in operation is getting good results, using national and domestic weapons. This is such a sector that it is our duty to provide the soldiers currently under tough conditions with the best weapons and logistic support," Demir continued. "Turkey's current fight and keeping its head upright requires us to work 24/7 tirelessly in a spirit of mobilization. The young people in this industry have the same spirit."

Evaluating the embargo on smart ammunition used in the Afrin operations, Alpman said they have mini-smart ammunition, which has contributed to the success of the operation.

"We had to take a piece of it from abroad and faced an embargo. We had to find it fast. And now one of our companies is making that piece," Alpman added.

Stressing that with the understanding of "national and domestic products" the state backs the companies, Alpman said they have reached 87 percent in nationality and 75 percent in locality.

"Locality and nationality are very important. We also produced the embargo-imposed products due to the Afrin operation with domestic and national means," he noted.

"We are a group that has been producing for the defense industry since the 1980s. A strong Turkey is the collateral of the regional countries. Now there is great will for the national and domestic defense industry. We can take action backed by this will," Istanbul Chamber of Industry (ICI) General Assembly Chairman and Kale Group Chairman Zeynep Bodur Okyay said. "Let us not forget this sector is shaped by the state. At the beginning of the 2000s, we were the sixth most importing country in the defense industry. We fell to 11th place thanks to the locality project we carried out in the past. This is an important indicator."

"Industrialists and universities are no longer separated in Turkey. We are now evolving toward a culture that is not sitting, but acting, finding a solution partner, regarding the involvement in the construction and value process is a must for being successful," Altunyaldız said.

Recalling that they set out three years ago with 27 founders, SAHA Istanbul Chairman Hasan Büyükdede said at the point they have arrived today, they have raised their national potential. He noted that they aim to be the contact point of more than 65,000 industrial facilities and universities with institutions affiliated to the Undersecretariat, and companies such as STM, Roketsan, Havelsan, TAI and Aselsan.

"The needs of the defense industry can no longer be procured from the outside. It is time to act together in this regard," he said.