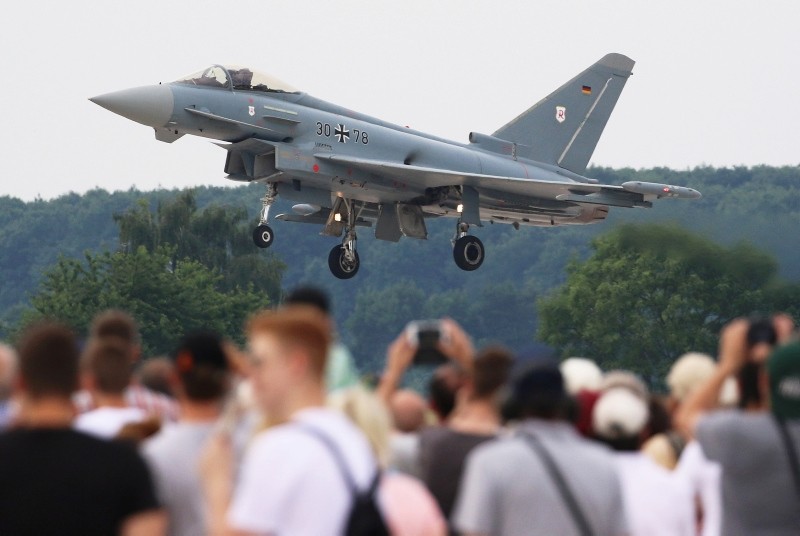 Spectators look on landing Eurofighter Typhoon aircraft of the German Air Forceduring the 'Day of the German Forces' at the air force base in Wunstorf, northern Germany, June 9, 2018. (EPA Photo)
by Jun 13, 2018 12:00 am

The European Union's next seven-year budget should allocate a total of 13 billion euros ($15.3 billion) for arms research and development to boost the bloc's defense capabilities, the European Commission proposed on Wednesday.

The funding will go towards the European Defense Fund, which was launched in 2017 as the EU seeks to beef up its defense and security in the face of growing threats, including an increasingly assertive Russia and doubts about the U.S. commitment to NATO under President Donald Trump.

The fund is meant to cut down on duplication in military research by providing an incentive for member states to pool resources. The bloc wants this to lead to the development of state-of-the-art technology that is interoperable among EU militaries.

The EU stresses, however, that it was not creating a parallel structure to NATO; rather, the increased defense cooperation is meant to be beneficial to the alliance as well.

The EU's 2021-2027 budget will be the first time that the bloc is including the defense fund in its long-term financial planning.

The commission's proposal will now need to be approved by EU member states and the European Parliament - a process that has been historically acrimonious and long.