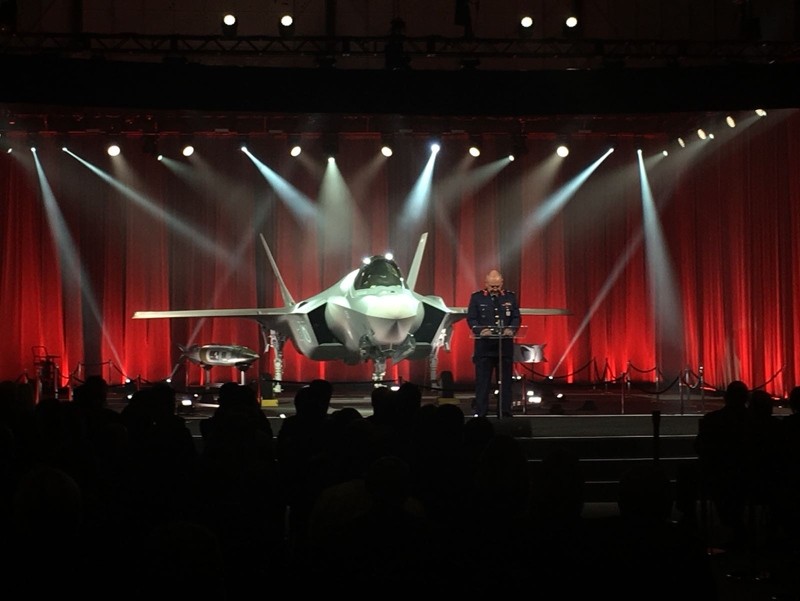 A partner of the F-35 joint strike fighter program, Turkey received its first two F-35 fighter jets Thursday, in whose production processes the Turkish defense industry has taken a significant role, while it has also increased the cost-efficiency of the program

The first two F-35 jets have been delivered to Turkey, one of the main partners of the F-35 Lightning II Joint Striker Program, in a ceremony Thursday at Lockheed Martin's facilities in Fort Worth, Texas.

The Turkish defense industry has been playing an active role in the production of the fifth generation F-35 fighter jets. The jets will remain in the U.S. for training activities and will be shipped to Turkey by November 2019.

Turkey has been a partner in the F-35 Joint Strike Fighter project, a consortium of nine countries, since 1999. The country is expected to receive six F-35 jets by 2020.

Four of these jets will be staying in the U.S. until 2020 and the two of them will be transferred to the integrated air base in Turkey's eastern province of Malatya.

Turkey will receive the remaining 24 jets in the first 30-jet order package by 2024. The country initially ordered 10 F-35 jets.

Speaking at the ceremony in Texas, Deputy Undersecretary of Defense Industries Serdar Demirel underscored that Turkey has made the biggest contribution to the F-35 joint strike fighter program and has allocated significant resources.

The involvement of the Turkish defense industry, Demirel said, has significantly increased the cost-efficiency of the program.

"While Turkey continues to serve global peace and security as a trustworthy and determined ally of the North Atlantic Treaty Organization [NATO], the F-35 jets will contribute to the protection of the country's territorial integrity and the security of the Turkish nation," Demirel said.

Lockheed Martin Chairman and CEO Marillyn Hewson said they were honored to deliver Turkey its first F-35A aircraft, adding that he was sure the F-35 will play a decisive role in enhancing global security with advanced capabilities and technology.

It was also stated that the F-35 project has created new business opportunities for Turkish defense industry companies. In this context, it is estimated that the Turkish firms will reach a trade volume of $12 billion in the production process.

The delivery of Turkey's F-35 jet took place at a time when the U.S. Senate had been working to block the transaction. The U.S. Senate late Monday passed a $716 billion defense policy bill including an amendment advising U.S. President Donald Trump and the U.S. Department of Defense (DOD) to prohibit the F-35 Joint Strike Fighter Jets sales to Turkey. The Republican-controlled U.S. Senate voted 85-10 for the annual National Defense Authorization Act (NDDA) for the Fiscal Year 2019.

In the amendment to the bill, senators cited U.S. pastor Andrew Brunson's imprisonment on terror charges as well as the Turkish government's decision to purchase the S-400 air defense system from Russia.

Following the Senate's decision, which Turkish authorities dubbed "unfortunate," the Pentagon on Tuesday emphasized that would be receiving its first two F-35s as planned.

The U.S. Senate's move has been received as an action in conflict with the recent positive atmosphere in Turkey-U.S. bilateral ties established with the Manbij deal, which was welcomed by NATO Secretary General Jens Stoltenberg.

The Turkish public has interpreted the Senate's action regarding the F-35s as a move to damage the recent improvement in relations ahead of the June 24 elections.

Regarding this concern-laden attitude of the Turkish public, Kılıç Buğra Kanat, an assistant professor of political science at Penn State University, emphasized that the after the elections, Turkish-American relations will be deeper and they will follow a positive course since some of the ongoing problems will be mutually resolved in the coming period.

"Both sides do not want to escalate the tension since they are vital partners for each other in the region. The recent positive developments in the ties came as a result of that disposition," Kanat said, referring to the Manbij deal.

The diplomats of the U.S. European Command (EUCOM) vouch for strong transatlantic relations and NATO alliance, he added.

"The perception of the Turkish public regarding the recent Senate decision has been widely influenced by the insensitivity of the U.S. toward recent events in Turkey, for instance the July 15 failed coup and Turkey's security concerns, since the U.S. government has been reportedly supplying ammunition to the terrorist groups in Syria," Kanat observed.

But the Manbij deal has become the first step in shifting the widespread perception toward the U.S. in a more positive direction.

The diverging policies of the U.S. Senate and the DOD, however, have so far failed to jeopardize Turkey's involvement in the program as the country has received its jets. The differences of opinion between Congress members and the government is not a new phenomenon for American politics, professor Mustafa Kibaroğlu, dean of the Faculty of Economics, Administrative and Social Sciences at Istanbul's MEF University, told Daily Sabah.

"Turkey is an established partner of the F-35 program and has allocated immense resources. Turkey's contribution to the project has been estimated to exceed $800 million," Kibaroğlu said. "But the issue is not simply economic and financial involvement in the project. It is related to the grander military and security partnership between NATO allies."

Kibaroğlu emphasized that both as a partner of the project and as a NATO ally, Turkey has fulfilled its liabilities within the framework of the program.

"The U.S. president, however, has the final say in the codification of the defense budget bill. If the [Donald] Trump administration acts in accordance with good sense with regard to Turkey's partnership in the project and proves itself a committed ally for the country, the program will continue as scheduled," Kibaroğlu said.

He highlighted that the U.S. has a significant opportunity to prove itself as a reliable NATO ally. The positive air in the Turkish-U.S. partnership that came to the fore with the Manbij deal could be sustained with a smoothly operating F-35 program.

İlter Turan, a political science professor in international relations at Istanbul Bilgi University, highlighted the fact that the Senate's version of the bill is not the law and the president has to sign it to render it into a law.

The Senate's bill leaves the final judicial discretion to the executive branch but directs the executive decision with amendments, Turan said and added that the U.S. no longer wants to create trouble in bilateral relations with Turkey on the basis of a bill that has not been ratified yet.

U.S. foreign policies, especially its relations with Turkey, have been shaped by more than one channel, as seen in the different attitudes of the Senate and the DOD regarding the F-35s' deliveries.

"The involvement of multiple actors in the relations creates uncertainty. The uncertainty may continue for a while until the suspending issues are resolved," Turan said.

The operational structure of U.S. Congress indeed has a limiting impact on the executive branch by way of politicizing such significant partnership projects as the F-35 program, Turan said.

"But if the U.S. administration decides that the delivery of the F-35 jets are in accordance with national interests, the program will follow the due course," he added. 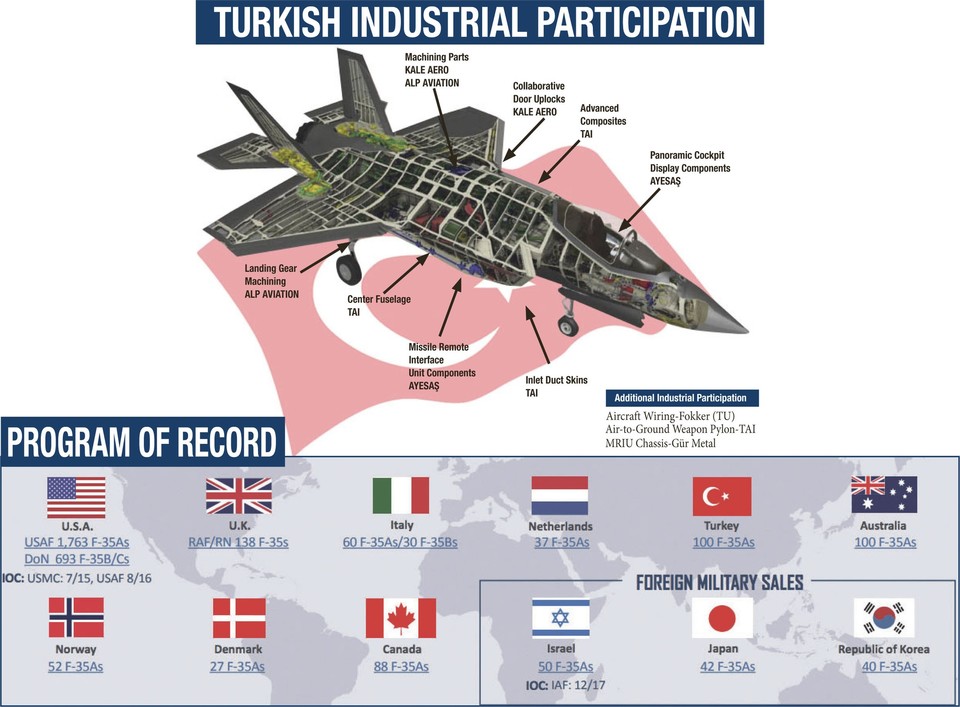 Ten Turkish companies supported the development and/or the production of the F-35.

Alp Aviation has been supporting the program since 2004 and currently manufactures the F-35's production airframe structure and assemblies, production landing gear components and over 100 F135 production engine parts to include titanium integrated blade rotors.

Turkish defense giant Aselsan is developing manufacturing approaches for advanced optical components, which are part of the F-35 Electro-Optical Targeting System. They are also working with Northrup Grumman on the F-35 CNI Avionic Interface Controller and will initiate full-scale production activities in the near term.

Fokker Elmo manufactures 40 percent of the F-35 Electrical Wiring & Interconnection System (EWIS) and will also deliver and support TAI with all center section wiring systems. Fokker Elmo is also developing the EWIS for the F135 engine, for which a major share is produced by Fokker Elmo Turkey in the Aegean province of İzmir.

Kale Aerospace has also been supporting the F-35 since 2005. In conjunction with Turkish Aerospace Industries, they manufacture and produce F-35 airframe structures and assemblies. It also supports Heroux Devtek as the sole source supplier for all three variants landing gear uplock assemblies. Additionally, Kale Aerospace has also established a joint venture in İzmir with U.S. engine maker Pratt & Whitney and is manufacturing production hardware for the F135 engine.

The defense giant Roketsan and TÜBİTAK SAGE are the Turkish joint leadership team who strategically manage the development, integration, and production of the advanced precision-guided Stand-off Missile (SOM-J) which will be carried internally on the 5th Generation F-35 aircraft.

Additionally, Lockheed Martin Missiles and Fire Control has partnered with Roketsan, through a teaming agreement, to jointly develop, produce, market and sell the advanced, precision-guided Stand-Off Missile – Joint Strike Fighter (SOM-J). The integration of SOM-J will enable the jets to precisely reach the targets, multiplying the combat capabilities of the jets.

Additionally, TAI is strategically manufacturing 45 percent of the F-35's including Air-to-Ground Pylons and adapters which is Alternate Mission Equipment (AME).