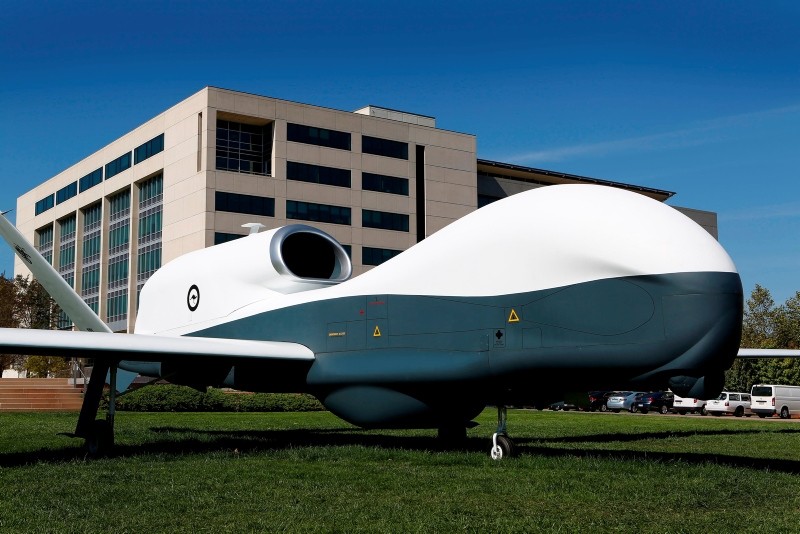 This handout photo taken April 2, 2014 and received from the Australian Department of Defense on June 26, 2018, shows a full scale mock up of the MQ-4C Triton Unmanned Aerial Vehicle in Canberra, Australia. (AFP Photo)
by Compiled from Wire Services Jun 26, 2018 12:00 am

The drone, which has the same wingspan as a Boeing 737, will give Australia high-altitude reconnaissance and surveillance capabilities across 10 percent of the world's surface, Pyne said.

"We want to be a good ally and we want to look after our own national interests and today, we went even further along that road by announcing that we would buy the Triton unmanned aerial vehicles," Pyne said.

Pyne said one of Australia's most important contributions to "Five Eyes" — an intelligence gathering network that includes the United States, Britain, Canada and New Zealand — were reconnaissance and surveillance over Southeast Asia and Antarctica, as well as the Indian and Pacific oceans.

The drones — high-altitude, long endurance aircraft that can support missions for up to 24 hours and provide a 360-degree view of their surroundings for over 2,000 nautical miles — will operate with 12 manned P-8 Poseidon surveillance planes that are replacing the aging P-3 Orion aircraft.

"Together these aircraft will significantly enhance our anti-submarine warfare and maritime strike capability, as well as our search and rescue capability," Prime Minister Malcolm Turnbull said in a statement.

"This investment will protect our borders and make our region more secure."

Australia will ramp up its defense spending to 2 percent of gross domestic product by 2020, a year earlier than had initially been promised, Pyne said.

U.S. President Donald Trump has been critical of U.S. allies that he says do not spend enough on their own defense.

Pyne added that the drones would be used to monitor who was in Australian waters, other countries' naval vessels, for people-smuggling and illegal fishing.

The unmanned systems would also continue Australia's surveillance of the South China Sea, he added.

"Australia insists on its rights to be able to travel through the South China Sea, in international waters as we have always done, whether it is with surface ships or aircraft," Pyne said.

China claims sovereignty over virtually all the resource-endowed South China Sea, despite rival claims from its Southeast Asian neighbors.

The Australian navy has already conducted joint exercises in the South China Sea with other nations, including the U.S.