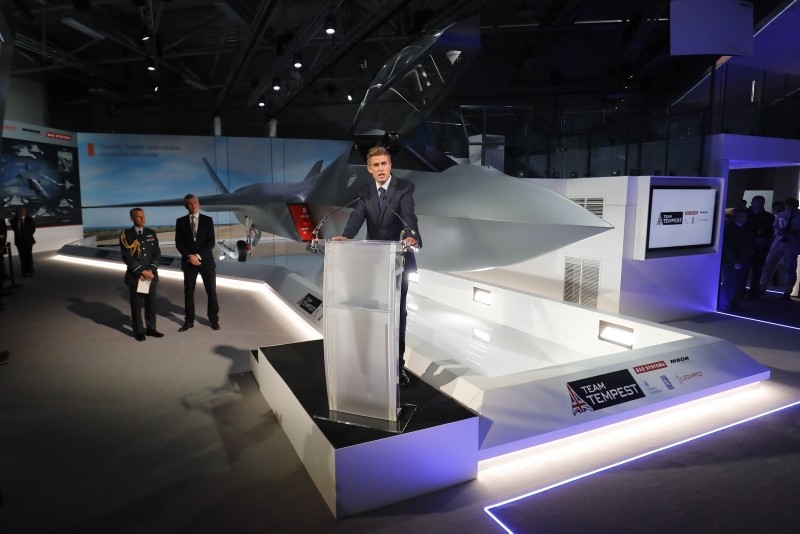 Britain's Defense Secretary Gavin Williamson speaks during the unveiling of a model of a new fighter jet, a part of Team Tempest, at the Farnborough Airshow, southwest of London, on July 16, 2018. (AFP Photo)
by reuters
Jul 17, 2018 12:00 am

Britain unveiled a model of a sleek proposed fighter jet named Tempest on Monday, raising questions about the future of European defense cooperation, given that Germany and France launched their own fighter jet program a year ago.

At the Farnborough Airshow, Defense Minister Gavin Williamson said 2 billion pounds ($2.7 billion) had been earmarked to finance the program out to 2025 and that Britain would seek international partners to provide additional funding.

Unveiled before visiting foreign military chiefs and industry executives at the BAE chalet, the new jet can be flown by a pilot or operated as a drone.

Germany and France are already working on a new jet, with the program led by France's Airbus, part of the Eurofighter consortium and Dassault Aviation SA, the maker of the Rafale.

Industry executives said the two programs could eventually be fused, once Britain and the European Union sorted out Britain's departure from the economic bloc in nine months.

Failure to unite around a single fighter program risked further fragmenting the European defense market, but the decision was up to government leaders, Airbus's defense chief Dirk Hoke told Reuters.

"If the politicians decide differently, we'll have to adapt, but in my opinion that would be bad for Europe," he said.

Leonardo Chief Executive Alessandro Profumo also voiced hope that Europe would unite around one program. "It's up to the governments, but Europe is moving more and more towards being unified. I have to be optimistic."

He said it was not clear if the U.K. project would eventually be merged with the Franco-German one, adding, "We are having a lot of conversations with a lot of countries."

Analysts see Sweden as a likely partner, although countries such as South Korea, Japan and Turkey, or Gulf arms-buying nations like Saudi Arabia, are also possibilities.

But experts say there is unlikely to be sufficient demand to support two separate European programs, particularly given the high cost of developing a cutting-edge new aircraft.

U.K. plans call for the new jet to be operational by 2035, in time to replace the Typhoon fleet when it ends service in 2040.

The jet is the centerpiece of a new U.K. combat air strategy that Prime Minister Theresa May said was aimed at "maintaining our world-class air power capabilities."

France announced in June that it would take a leading role on a new fighter program that would start as a bilateral effort with Germany but could be expanded later.

The Typhoon, in contrast, was developed by the four-nation group of Germany, Spain, Britain and Italy in the 1980s.

A German defense ministry spokesman declined to comment on the UK program, but said the Franco-German project was open to additional partners.

Michael Christie, BAE Systems strategy director for air, said Britain had the capability to develop Tempest alone but that it made sense to develop it with a partner given the cost and a desire to lock in future sales.

However, he added that BAE wanted to "play a leading role in whatever partnership that we are involved in."

Britain has not developed a fighter jet alone since the 1960s. However, it helped develop and build the most advanced stealth fighter in the U.K. fleet, the U.S.-made F-35, with BAE Systems carrying out about 15 percent of the work on each jet.