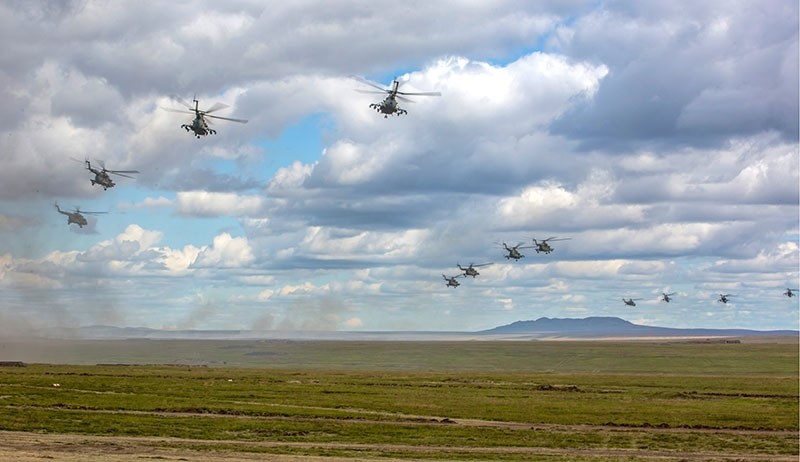 In this photo provided by Russian Defense Ministry Press Service on Tuesday, Sept. 11, 2018, Russian military helicopters fly, in the Chita region, Eastern Siberia, during the Vostok-2018 exercises in Russia. (AP Photo)
by Sep 11, 2018 12:00 am

Russia on Tuesday launched what it has called its largest every military drills, with hundreds of thousands of Russian troops taking part along with Chinese soldiers in a massive show of force that has rattled the West.

The week-long war games dubbed "Vostok-2018" (East-2018), "have kicked off" in far eastern Russia and on the Pacific Ocean, the defense ministry said in a statement.

It released video footage of military vehicles, planes, helicopters and ships getting into position for the initial stage of the drills.


The drills, which include the Chinese and Mongolian armies, have been condemned by NATO as a rehearsal for "large-scale conflict."

President Vladimir Putin is expected to attend Vostok-2018 after hosting an economic forum in Russia's far eastern city Vladivostok where his Chinese counterpart Xi Jinping is one of the prominent guests.

The military exercises come at a time of escalating tensions between Moscow and the West over accusations of Russian interference in western affairs and ongoing conflicts in Ukraine and Syria.

But Defense Minister Sergei Shoigu said these exercises are even larger, with 300,000 soldiers, 36,000 military vehicles, 1,000 planes and 80 warships taking part in the drills. 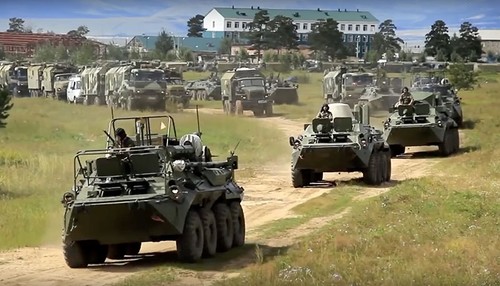 "Imagine 36,000 military vehicles moving at the same time: tanks, armored personnel carriers, infantry fighting vehicles -- and all of this, of course, in conditions as close to a combat situation as possible," Shoigu said.

The Russian army is rolling out all of its latest additions for the event: Iskander missiles that can carry nuclear warheads, T-80 and T-90 tanks and its recent Su-34 and Su-35 fighter planes.

At sea, the Russian fleet is deploying several frigates equipped with Kalibr missiles that have been used in Syria.

Wednesday will see games featuring anti-aircraft technology, while the main event will be on Thursday, the defense ministry told journalists covering the event in eastern Siberia.

"It fits into a pattern we have seen over some time -- a more assertive Russia, significantly increasing its defense budget and its military presence," the alliance's spokesman Dylan White said late August.

Last month, Kremlin spokesman Dmitry Peskov said Russia's "ability to defend itself in the current international situation which is often aggressive and unfriendly to our country is justified, essential and without alternative."

Relations between Russia and the West declined sharply in 2014 with Moscow's annexation of Crimea and the subsequent conflict in eastern Ukraine.

Moscow has increased the number of its large-scale military exercises in the Caucasus, the Baltic and the Arctic in recent years.

Russia's previous military exercise in the region, Vostok-2014, was almost half the size, with 155,000 soldiers participating.