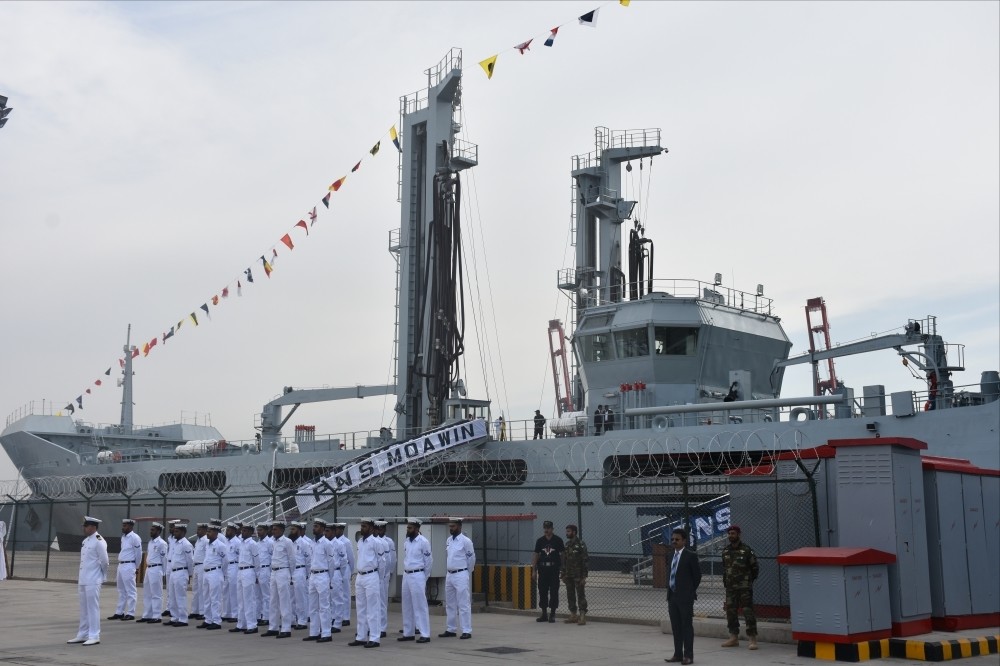 The Turkish defense industry, which designed the fleet tanker in five years, has opened the door to new export opportunities.
by Daily Sabah with Wires
Oct 17, 2018 12:00 am

As a result of the growing cooperation between Ankara and Islamabad, a fleet tanker developed by Turkey was delivered to the Pakistan Navy in a ceremony yesterday. The project became one of the largest export projects of the Turkish defense industry for a single item

The Pakistan Navy Fleet Tanker (PNFT), one of the biggest single-item export projects of the Turkish defense industry, was delivered to the Pakistan Navy at a commissioning ceremony held in Karachi yesterday.

Addressing the ceremony, Alvi said the ship was the largest military vessel ever built in Pakistan. Pointing to the growing cooperation between fellow countries Pakistan and Turkey, Alvi thanked Turkey and the STM in this regard. He said that the cooperation between the two countries will even grow stronger with the MİLGEM (National Ship) project.

The Pakistan Navy Fleet Tanker was bound by a contract on Jan. 22, 2013 following a tender with China. The project became one of the largest single-item export projects of the Turkish defense industry. The first sheet cutting ceremony was held on Nov. 27, 2013, and the vessel was launched on Aug. 19, 2016 with a ceremony attended by Pakistani Prime Minister Nawaz Sharif.

In the project developed in cooperation with the STM as the main contractor, the vessel was designed in Turkey based on the operational needs of the Pakistan Navy. The ship was built in the Karachi Shipyard by the workforce of the shipyard with technical data and material packages sent to Pakistan.

The project, a first between Pakistan and Turkey in terms of the construction of military vessels, stands out as an exemplary and original cooperation in the field of defense and shipbuilding. The Turkish defense industry, which designed the fleet tanker in five years and delivered it to the Pakistan Navy, has opened the door to new export opportunities.

Defense Industry Chairman Demir said in a statement to reporters after the ceremony that with the ship, Turkey's engineering accumulation was exported to the brother country. The ship was constructed in Karachi, but it reached this point with Turkey's engineering support, strength and design, Demir stressed.

In response to the question regarding the recent success of Turkish companies against strong rivals in defense industry projects in Pakistan, Demir said: "Western systems dominate here like in most countries. We needed to surpass them. We had to demonstrate that we could surpass them with a technical qualification. Although we often had the cost advantage, we had to demonstrate ourselves in technical superiority as well. This is crucial and has been done by surpassing marketing structures that have been formed for years."

Pointing out that China, which was very active in the region, was another rival, Demir said that their proposals were attractive in terms of financing and price. "They work in many areas in Pakistan, but this is a competition," he noted.

Within the scope of the Pakistan Navy Fleet Tanker project, STM also provided training and technical support to Karachi Shipyard and Pakistan Navy personnel as well as integrated logistic support services, in addition to providing design services and material packages.

The Turkish shipbuilding industry, which has made significant progress in the area of military shipbuilding recently, carried out the design and engineering services, as well as the export of subindustry products in this field, along with the said project. More than 20 Turkish companies took part in the project, which resulted in one of the largest and most modern ships in the history of Pakistan Navy.

Equipped with an underway replenishment system, the PNFT will transfer fuel, water and material to the other ships in the Pakistan Navy.

With a maximum speed of 20 nautical miles, the 158-meter PNFT is 22 meters in width and can handle up to 15,600 tons in tonnage. PNFT can also perform day and night helicopter operations. Meanwhile, the Pakistan Navy named the ship "PNS MOAWIN."

In addition to this accomplished project, STM was selected as the main contractor in the project for the half-life modernization of Agosta 90B class submarines belonging to the Pakistan Navy.

With the contract signed in 2016, the company has carried out the first submarine modernization design and engineering services in Turkey.

As in the navy fleet tanker, this project also paved the way for exports for many firms operating in the Turkish defense industry. Following the modernization activities, the submarines are scheduled for delivery in 2020 and 2021.

Recently in July, Ankara and Islamabad signed a deal for the sale of 30 Turkish T-129 Advanced Attack and Tactical Reconnaissance Helicopters (ATAK). The T-129 ATAK helicopter was developed by the Turkish Aerospace Industries (TAI) and Italy-based AgustaWestland and rebranded as Leonardo Helicopters in 2016.

In July this year, Ankara also won a multibillion-dollar tender to supply four corvettes to the Pakistan Navy - a deal dubbed the highest export deal in the history of Turkey's defense industry by then-Defense Minister Nurettin Canikli.

In May 2017, Turkish and Pakistani defense companies struck a deal for the construction of four Turkish Ada class MİLGEM (National Ship) corvettes.

According to the agreement, two ships will be built in Istanbul, while two others in Karachi. The first pair of the corvettes will join the inventory of Pakistan's naval forces in 2023, while the remaining two will be handed over in 2024.

Touching on the latest situation in the export of MİLGEM corvettes and ATAK helicopters to Pakistan, Demir stated: "Our friends are making the final determinations about MİLGEM. Two of the ships will be built here, and the two will be built in Turkey. Engineering work on how the construction here will be and how drawing will be made needs to start. Our Defense Ministry and we are here to set a common road map and start and finalize the project in a way that it will honor Turkey."

According to Demir, the ATAK Project has been signed and an export permit process is in progress. In addition, small-scale sales and cooperation talks are underway on various electronic warfare systems, ammunition, and light and heavy weapons, which have not been declared to the public.