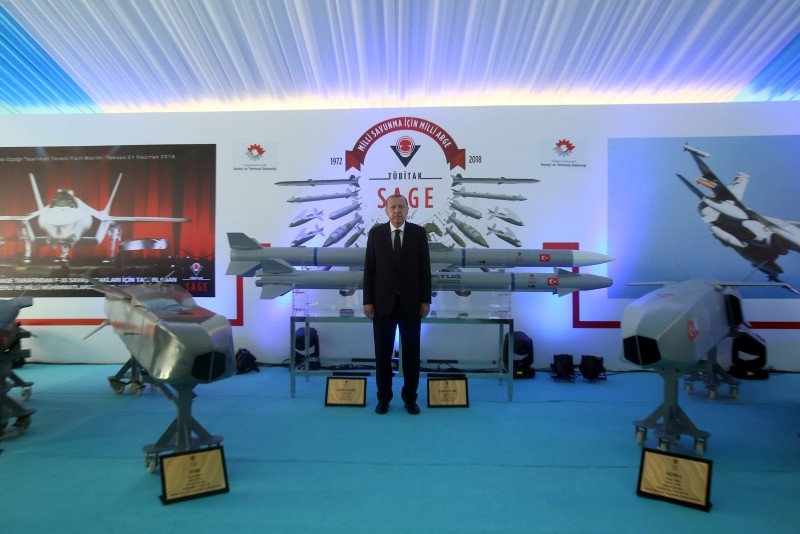 The first delivery of the system named Siper (meaning trench in English) is planned for 2021, Erdoğan said at the opening ceremony of the National Technology Development Infrastructures.

The ceremony was held at the Turkish Scientific and Technological Research Council's (TÜBİTAK) Defense Industry Research and Development Institute (SAGE) campus in Ankara.

Turkey is moving rapidly on the way to have a say in all fields of defense, aviation and space technologies, Erdoğan said.

"Our defense industry sector has turned into a national structure with the participation of small- and medium-sized enterprises (SMEs), research institutions and universities alongside more than a thousand companies today," Erdoğan said.

Turkey's aviation and defense industry exports increased by nearly 14 percent, reaching over $900 million in the first half of this year, versus the same period last year.

Exports, about $795.71 billion in the January-June period of 2017, rose to some $906.41 billion this year, while aviation and defense industry exports in the last 12-month period reached nearly 1.85 billion, according to Turkish Exporters' Assembly (TİM) data.

The exports of the industry increased by 3.72 percent last year compared to the previous year. With the said performance, the sector reached $1.74 billion in exports, achieving the highest foreign sales figure to date, while the export of the sector in the last five years reached $8.1 billion.

Turkish defense contractors ASELSAN and ROKETSAN have already developed air-defense missiles for low altitude (Hisar-A, 15 km) and medium altitude (Hisar-O, 25 km) to defend against fixed and rotary wing aircraft, cruise missiles, air-to-ground missiles and unmanned aerial vehicles in order to protect military bases, ports, facilities and troops from air threats. The Hisar-A and Hisar-O are expected to be in service by 2020 and 2021, respectively. The Korkut system, which began to be delivered to the Land Forces Command, will also be used to protect battleships against missiles.

Meanwhile, in September last year, Turkey agreed to buy two S-400s surface-to-air missiles from Russia in a deal worth over $2 billion. Officials from Ankara have repeatedly said that the purchase of the S-400 systems was prompted to fulfill the country's security needs.

Defense Minister Hulusi Akar said last week that the installation of the S-400 missile system would begin in October 2019.

The S-400 system, which was introduced in 2007, is the new generation of Russian missile systems; so far, Russia has only sold them to China and India.