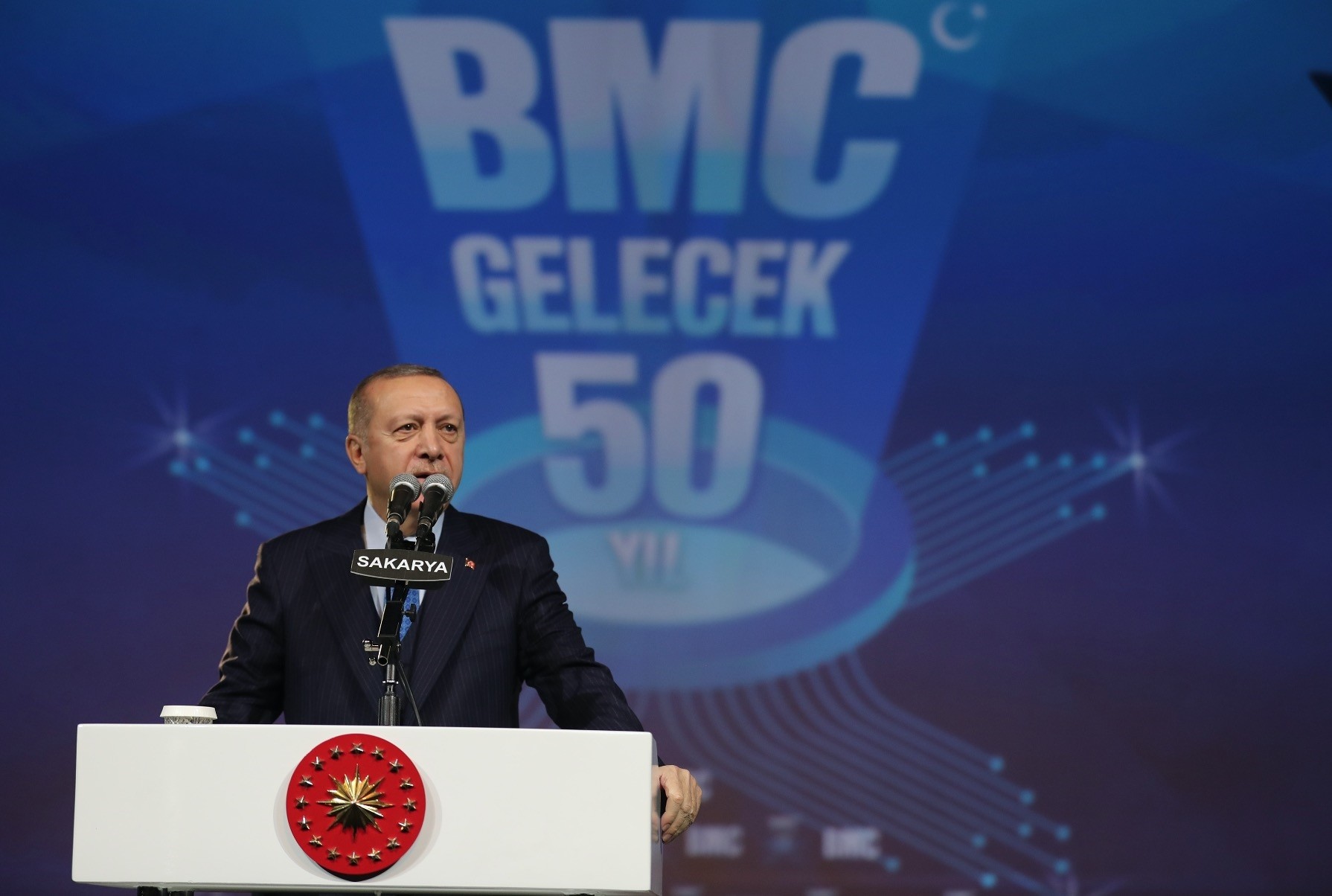 Over the last 16 years, the Turkish defense industry has gone through a profound transformation to domestically manufacture a series of military platforms, reaching up to 65 percent in domestic defense products as opposed to just 20 percent in early 2000. The Turkish defense firms also sell major land, air and marine platforms to foreign militaries. Speaking at the groundbreaking ceremony for Turkish defense firm BMC's new factory in the Karasu district of Sakarya, President Recep Tayyip Erdoğan said that Turkey's dependency on imported military hardware has been reduced from 80 percent to 35 percent over the last 16 years.

In Oct. 2018, the Pakistan Navy Fleet Tanker (PNFT) was delivered at a commissioning ceremony held in Karachi by the Turkish navy.

Turkey's locally developed T129 Advanced Attack and Reconnaissance Helicopter ATAK will also be exported to Pakistan. The two countries finalized a deal for the sale of 30 ATAK helicopters in July.

Turkey is also negotiating the sale of eight to 10 ATAK helicopters to the Philippines, according to Filipino Defense Minister Delfin Lorenzana.

Moreover, as a result of accelerating efforts, the defense industry's exports recorded a 17 percent rise compared to 2017 and surpassed the target of $2 billion last year, hitting a record high level of $2.04 billion.

The U.S. was the top exports market of the aviation and defense industry sectors with $726.7 million, up 5 percent from a year earlier. It was followed by Germany with exports worth of $226.1 million, rising 8 percent compared to 2017.

The president praised the construction of BMC's $500-million new factory. Once completed, the new production and technology base will employ some 10,000 people.

"When this facility is fully operational, we expect a $5 billion added value for the Turkish economy. Apart from our needs, we will export the products manufactured here to different parts of the world, particularly to Qatar," he said and added the exports of the facility is expected to total $1 billion.

Qatar holds a 49.9 percent stake in BMC; therefore the new factory will also produce products for the Qatari military.

Speaking of Turkish-Qatari ties, the president said Turkey's cooperation with Qatar will continue to grow in various sectors, including defense, trade, tourism and energy.

"We have never forgotten and will never forget the solidarity shown to our country by our Qatari brothers on nearly all issues - from the July 15 coup attempt to the attacks on [our] exchange rates [Turkish lira] in August," said Erdoğan remarked.

President Erdoğan said the facility will start operating in 2023. The first phase, for which the ground laying ceremony was held yesterday, will be built on an area of 100,000 square meters and completed by the end of this year.

On the occasion of BMC's new investment that will expand the domestic production of defense platforms and their components, the president highlighted the significance of creating an independent defense industry, since Turkey had been subjected to embargoes before, banning the sale of military goods to the country.

"Our strategic partners disabled the military systems they sold to us back in 1974. Turkey was punished by its own allies when it intervened against the genocide of the Turkish Cypriots. But Turkey is now capable of building its own facilities," he said.

The U.S. put an embargo on selling all military goods to Turkey following the Cyprus Peace Operation when it sent soldiers to the island to protect Turks from the oppression of the Greek Cypriot regime.

During the embargo, from February 1975 to September 1978, Turkey was unable to receive the jets it paid for and could not get back the planes under maintenance, Erdoğan said, adding added that event spare parts for the platforms provided by allies were not delivered.

This embargo, Erdoğan emphasized, cost Turkey billions of dollars and that in order not to experience a similar a situation again, the country must fully mobilize its industrial capabilities to ensure the reinforcement of the defense industry.

During his speech in Sakarya, President Erdoğan also raised an issue he has brought up recently.

The president recalled the embargo on the cannabis production back in 1970s and reiterated that the Agriculture and Forestry Ministry will soon start initiatives to resume and expand industrial hemp production. "The aim is not only to make Turkey militarily independent but also to ensure economic independence," the president said, and he claimed that Turkey was pressured to ban the cultivation of cannabis on the condition of being relieved of the military embargo.

When the president first announced that Turkey will start cultivating more cannabis for industrial use, the producers, nearly all of whom are now unable to do it, hailed the project and expressed their willingness to take part.

Cannabis is not an alien crop to Turkish arable land. Up until 1971, the year when the Turkish military released a memorandum and overthrew the government headed by late President Süleyman Demirel, who was unwilling to reduce cannabis production despite pressure from the U.S. administration at the time, Turkey was one of the largest producers in the world. Following the military memorandum, late Prime Ministe

r Nihat Erim banned the cultivation of hash, a different variant of cannabis. Three years later in 1974, late Prime Minister Bülent Ecevit and his coalition with Necmettin Erbakan resumed hash production, which was followed by a U.S. embargo. In 1961, Turkish farmers cultivated cannabis on an area of nearly 35,000 acres. In 2017, the figure was only 11.3 acres. In addition to global trends, the embargo and U.S. pressure have played a major role in this decline. In terms of capacity, Turkey produced 5,000 tons of cannabis in 1961 and only 7 tons in 2018.