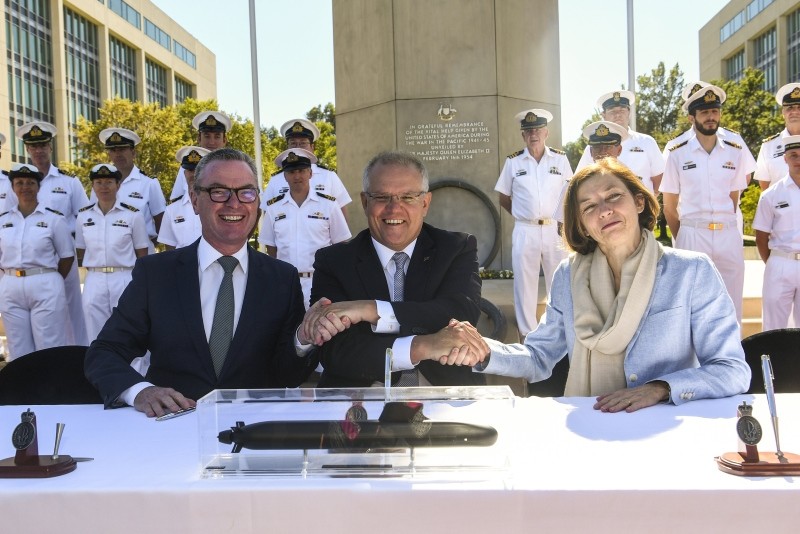 Australia formally signed a Aus$50 billion "strategic partnership" with France to build 12 state-of-the-art submarines Monday, a signal of Canberra's willingness to project power across the Pacific and ending a two-year wrangle that cast doubt over one of the world's most lucrative defense deals.

Prime Minister Scott Morrison hailed the "very audacious plan" at a ceremony in Canberra as "part of Australia's biggest ever peace-time investment in defense."

The partnership's main pillar is a contract for France's Naval Group -- a consortium with state backing -- to build 12 attack-class submarines and has been years in the making.

At roughly US$35 billion this is Australia's largest ever defense procurement project and the largest ever foreign sales deal by French shipbuilder Naval Group.

The first submarine is expected to be finished in the early 2030s, starting with sea trials around the first quarter of 2031 and operational testing in late 2032.

Australia selected the French builder as its preferred bidder for the fleet of submarines in 2016 ahead of other offers from Japan and Germany.

However, final contracts were delayed amid domestic media reports of cost blowouts and production delays.

Australia has been trying to flex its military muscles, committing to spending 2 percent of gross domestic product on defense by 2020 and 2021.

Australia has splurged more than 200 billion dollars in military investment and defense purchases, including six long-range spy drones from the US, 12 high-powered sea patrol vessels and 211 eight-wheel-drive "super tanks" from Germany and nine navy combat frigates from Britain.

Critics say that is too late: the waters to Australia's north and east are the scene of an intense struggle between the United States, China and regional powers, who are all vying for influence.

Beijing has made territorial claims to much of the South China Sea -- a marine thoroughfare that is vital to maintain the supply of ores, minerals and crude that fuel the Chinese economy.

Washington fears that China is becoming increasingly assertive over those claims to display its dominance over smaller Asian nations and become the prime regional power.

Australian military analysts hope the subs will allow the country to maintain a credible deterrent against possible hostile actions.

Visiting French Armed Forces Minister Florence Parly cosigned the agreement in a ceremony that took place in the shadow of a memorial to US forces in front of the Australian defense offices in Canberra.

Under the Strategic Partnership Agreement, 12 conventionally powered submarines derived from the Naval Group Barracuda nuclear design will be constructed in a new shipyard in South Australia.

Parly hailed the agreement, which was negotiated and drafted entirely in English, as a long-term partnership between Australia and France and dismissed some "whining about the lengths of the negotiations".

"Behind those masses of dark steel, behind those eyeless beasts" there was friendship and a common attachment to multilateralism and the rules-based order, she said.

"We are bidding in the Netherlands today. That is one really important bid because they are looking as well for expeditionary submarines," he said, hoping the Australia contract would serve as a launch pad for contracts in other countries including India, Poland and Brazil.

"We are looking at a very, very long-term partnership with Australia," he said.

The agreement comprises two thick volumes with 23 schedules, with two more schedules to be added later.

It sets conditions on what intellectual property Australia has access to and which it owns, and covers a range of provisions for contract termination or missed deadlines.

Guillou also said an alliance with Italian shipbuilder Fincantieri would permit the two companies to team up on research, development and procurement for some common projects, either bilateral or for export.

"If we look at the change in the market, we need European players to unite more strongly to be able to face the new giants in this market, like CSCC in China, like OSK in Russia," he said.

"We really want to take the initiative of being stronger before the others are stronger."
RELATED TOPICS