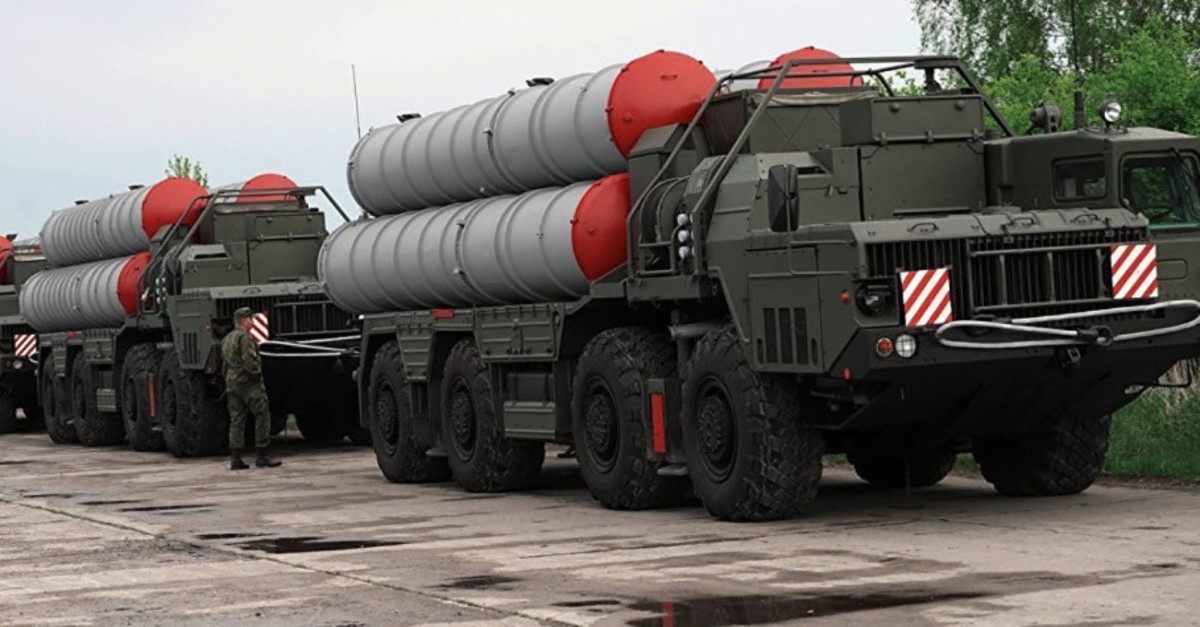 Ankara and Moscow signed a $2.5 billion deal for S-400 missile defense systems and the first battery is scheduled for delivery to Turkey in this July.
by Daily Sabah Mar 08, 2019 12:59 am

Ankara will not backtrack on its purchase of S-400 air-defense missiles from Russia, an effort to diversify and add to the country's defense portfolio

On numerous occasions, Turkey has repeatedly stressed its decisive position on the S-400 air-defense missile system deal with Russia. Regarding the purchase as a necessity in order to fortify its defense systems, Ankara will not accept any outside intervention regarding its decision. Officials have also made it clear that it has made the purchase with due consideration of the country's immediate security needs. Even when the U.S. State Department and an American NATO general in Europe uttered threats against Turkey to exclude the country from the F-35 fighter jet program and stall the delivery of jets to Turkey, along with possible sanctions, the highest office of the country again expressed Turkey's commitment to the S-400 deal.

"Turkey will not turn back from its deal to purchase S-400 missile defense systems from Russia," President Recep Tayyip Erdoğan said on Wednesday, adding that Ankara may subsequently look into buying S-500 systems. "We concluded the S-400 issue, signed a deal with the Russians, and will start co-production. Later, we may work on S-500s," Erdoğan added. In an interview with Kanal 24, Erdoğan said that the U.S. should not try to "discipline" Turkey through trade measures. If it does, he emphasized, Turkey has its own measures prepared. One of the measures the president alluded to was the U.S.' intention to exclude Turkey from the generalized system of preferences (GSP). "It's done. There will never be a point of turning back. This would not be ethical, it would be immoral. " Erdoğan said.

President Erdoğan said that Turkey is still open to buying Patriot systems from the United States but only if the conditions are suitable, and he added that Ankara may seek a deal to procure S-500 systems from Moscow later.

Vice President Fuat Oktay also said yesterday that Turkey is pursuing its own interest in purchasing the Russian S-400 missile defense system. "Turkey is doing what is necessary for its own interests regarding the S-400 missile defense system, it makes its own decisions and choices," Oktay told the Anadolu Agency (AA). Earlier on Wednesday, Foreign Minister Mevlüt Çavuşoğlu said their allies should not interfere in Ankara's purchase of defense systems from non-NATO countries. In January, the U.S. made an official offer to Turkey for a $3.5 billion sale of the Patriot missile and air defense systems during a visit of an American delegation. The provision of credits, technology transfer and joint production were discussed during that visit but nothing has actualized.

In 2009 during Barack Obama's tenure in office, when Turkey wanted to the buy the Patriot system, U.S. Congress declined the sale of the Patriot PAC-3 batteries, which were worth $7.8 billion at the time. Even though it would not sell the necessary missile systems to a NATO ally, Washington continued to provide extensive arms support to terrorist groups in Syria that have continuously attacked Turkey and claimed hundreds of lives.

These recent remarks by Turkish authorities came after U.S. Army Gen. Curtis Scaparrotti, the head of U.S. forces in Europe, said on Tuesday he recommends that the U.S. does not sell Lockheed Martin F-35 jets to Turkey if Ankara does not drop its plans to buy the S-400 missile defense systems from Russia.

Following Scaparrotti, U.S. State Department spokesman Robert Palladino said Washington has made clear to Turkey that if it proceeds with the purchase of the S-400, they "will have to reassess Ankara's participation in the F-35 fighter jet program and other potential future arms transfers to Turkey."

Turkey has been in the F-35 program since 1999, and the Turkish defense industry, with 12 firms, has taken an active role in the production of aircraft and invested $1.25 billion in the aircraft's development. Since Turkey is a "Level-3" partner in the multinational F-35 project, Turkish defense companies even produce high-end SOM-J missiles for the program. The country took delivery of its first F-35 fighter jet at a ceremony in Fort Worth, Texas, on June 21, 2018. Two more F-35s are expected to be delivered this month if all goes to plan.

The Ankara-Moscow S-400 deal was inked in December 2017, when the parties signed a $2.5 billion agreement for two batteries of the systems - Russia's most advanced long-range anti-aircraft missile system in use since 2007. Russia is scheduled to deliver first battery to Turkey in July this year.

Turkey, as a NATO member with the second-largest army in the alliance, has not taken the decision to acquire a Russian-made surface-to-air-missile without extensively calculating the geopolitical risks. The country's neighborhood abounds with ballistic missile proliferation and rogue weapons of mass destruction (WMD) programs, as well as increasing terror threats by groups in northern Syria, including the People's Protection Units (YPG) and Daesh. The YPG is the Syrian affiliate of the PKK, a terror group jointly designated by the U.S. and EU.