US must choose between Turkey and terrorists, Vice President Oktay says 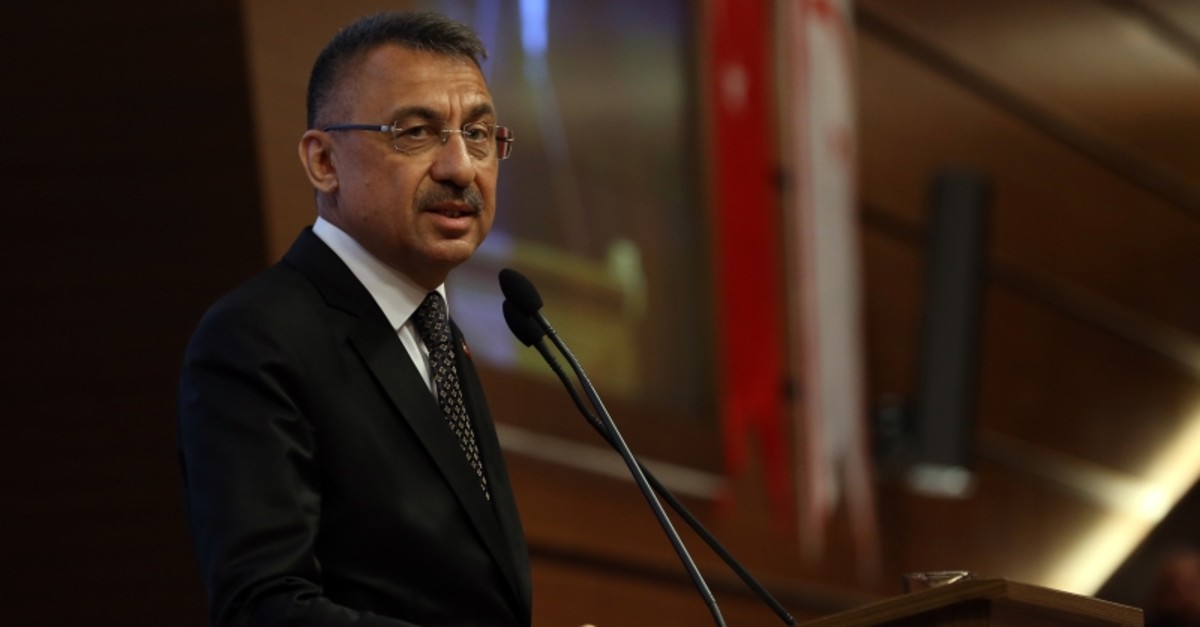 "The United States must choose. Does it want to remain Turkey's ally or risk our friendship by joining forces with terrorists to undermine its NATO ally's defense against its enemies?" Oktay said on Twitter.

Oktay's remarks came in response to U.S. Vice President Mike Pence after he urged Turkey on Wednesday not to buy a Russian S-400 anti-missile system, keeping up the pressure on its NATO ally to abandon the purchase that Washington considers a threat to U.S. military equipment.

"Turkey must choose. Does it want to remain a critical partner in the most successful military alliance in history or does it want to risk the security of that partnership by making such reckless decisions that undermine our alliance?" Pence said in remarks at a NATO event in Washington.

The United States is at an inflection point in a yearslong standoff with Turkey, a NATO ally, after failing to sway President Recep Tayyip Erdoğan that buying a Russian air defense system would compromise the security of F-35 aircraft.

But President Erdoğan has refused to back down from Ankara's planned purchase of Russian S-400 missile defense system and said Turkey will take delivery of the S-400s in July.

Foreign Minister Mevlüt Çavuşoğlu also stressed that Ankara does not have to choose between Russia and other countries during his address at the NATO meeting.

"The purchase from Russia is a done deal," Çavuşoğlu said at a panel organized by the Atlantic Council, Turkey's Role in NATO and Regional Security Challenges, in Washington where foreign ministers of NATO members came together for the 70th anniversary of the security bloc. "We are not choosing between Russia and any other allies. We don't see our relations with Russia as an alternative to our relations with others. And nobody, neither the West nor Russia, should or can ask us to choose."

Turkey's foreign minister arrived in Washington the same week the U.S. announced it would suspend all "deliveries and activities" related to Turkey's procurement of F-35 jets because of Ankara's plans to purchase Russia's S-400 surface-to-air missile (SAM) system.

If the Pentagon takes the next step and removes Turkey from the F-35 program, it would be the most serious crisis in the relationship between the two allies in decades.

On Tuesday, acting U.S. Defense Secretary Patrick Shanahan said that he expected to resolve the dispute with Turkey, as he expressed optimism that both countries would find a way out of the crisis by persuading Turkey to purchase the Patriot defense system, instead of S-400s.

Ankara's decision to resort to the Russian-made SAM system is the result of a comprehensive calculation of geopolitical risks compelling the country to look for alternatives to strengthen its defense systems after the U.S. refused to sell similar weapons to Turkey. When Turkey wanted to the buy the Patriot missile system from the U.S. in 2009 during then-President Barack Obama's term, the U.S. Congress declined the offer for the sale of the Patriot PAC-3 batteries worth $7.8 billion at the time. Though not selling the missile systems to its NATO allies, Washington continued to provide extensive arms support to terror groups in Syria that have continuously attacked Turkey and claimed hundreds of lives.

The U.S. military has sent thousands of truckloads of weapons to militants of the PKK's Syrian affiliate, the People's Protection Units (YPG), including heavy weapons, under the pretext of fighting Daesh, defying Ankara's warnings that the weapons could eventually be transferred to PKK militants and used against the Turkish army.

The U.S. is ramping up efforts to increase its military and diplomatic presence in the region, including Syria, Iraq and the Eastern Mediterranean, to safeguard the interests of its regional allies, particularly Israel. Therefore, U.S. ambitions in the region, which do not take into consideration the interests of its NATO ally Turkey, constitute the fundamentals of the conflict between the two countries.

For the first time, U.S. Secretary of State Mike Pompeo also attended the 6th Trilateral Greece-Greek Cyprus-Israel Summit held last month in Jerusalem. Turkish officials previously warned that Ankara would never allow attempts to extort natural resources in the Eastern Mediterranean region without due consideration of the rights of Turkey and the Turkish Republic of Northern Cyprus (TRNC).