Foreign Minister: S-400 will not detect NATO systems as hostile 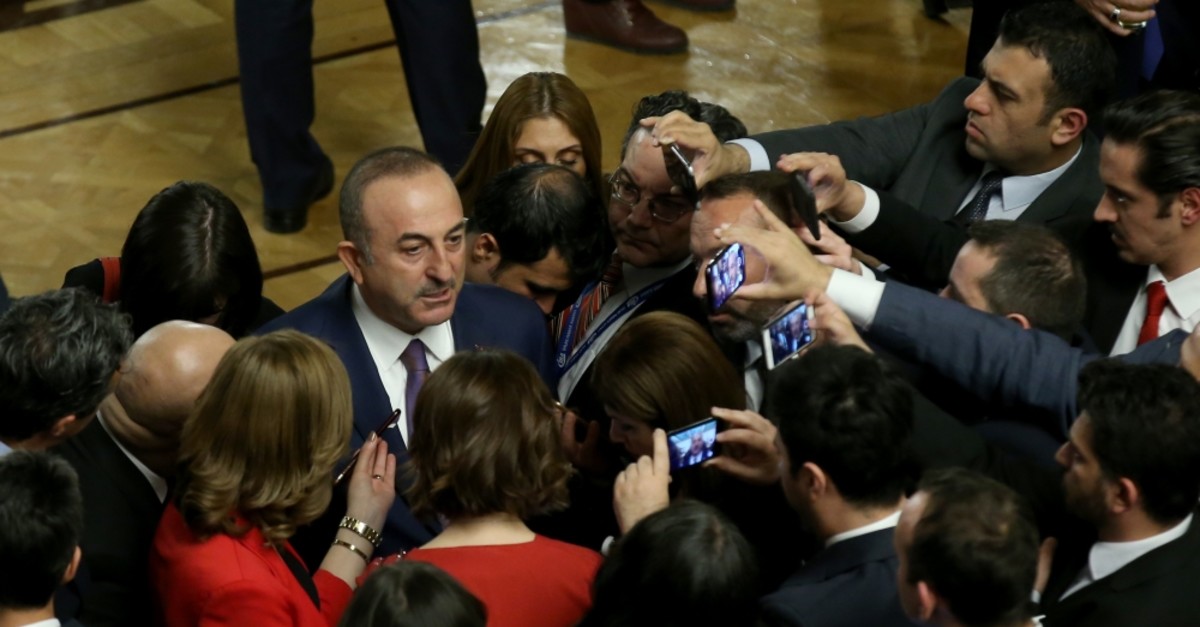 Foreign Minister Mevlu00fct u00c7avuu015fou011flu answers the questions of journalists during a reception held for the 99th anniversary of the foundation of the Turkish Grand National Assembly (TGNA), Ankara, April 23, 2019.
by Daily Sabah Apr 25, 2019 12:10 am

Turkey's S-400s will not detect the NATO defense systems in the enemy or hostile category. The country also rejects rumors claiming that the S-400 could be deployed in a third country once they are delivered in July

Turkey's S-400 surface-to-air missile (SAM) system deal with Russia has been a contested issue since it is the only NATO member that will purchase Russia's latest SAM system, although three members already have the S-300 in their inventory. Trying to form a cooperative platform to efficiently operate its S-400, to be received in July, Turkey offered a joint technical group with NATO, but its major partner, the U.S., has not responded so far. On every occasion, however, Turkey has emphasized that the S-400 is a done deal and there is no turning back, and that its version of the Russian-made system will not detect NATO platforms as hostile. Speaking at the reception held on the occasion of the 99th anniversary of the foundation of the Turkish Grand National Assembly (TGNA), Foreign Minister Mevlüt Çavuşoğlu said Turkey's purchase of the S-400 missile defense systems from Russia is a "done deal" and there is no "interim formula" including third parties.

The minister emphatically stated that the S-400 systems Turkey bought would constitute no threat to NATO systems or "see them as the enemy," in efforts to reassure Washington and NATO over security concerns.

Çavuşoğlu emphasized that Turkey will not consider the deployment of the S-400 in another country such as Azerbaijan or Qatar.

In response to the allegations that the S-400 system will hack into the F-35 stealth fighters and compromise the security of the whole program, Çavuşoğlu pointed out that Norway's F-35s already fly near the Russian border and Israel's F-35 have flown in the radar area of the S-400s deployed in the Russian base near Latakia.

Turkish officials assured U.S. counterparts that the S-400s will be based on domestic software and will operate with unique radar, detection and surveillance systems.

Washington argued that the purchase of the Russian-made S-400 missile systems could risk the security of some U.S.-made weapons and other technology used by NATO, including the F-35 fighter jets. Turkey has responded that it was the U.S. refusal to sell it the Patriot defense systems that led it to seek other sellers, adding that Russia offered it a better deal, including technology transfers.

On Friday, Çavuşoğlu said NATO has positively responded to Turkey's proposal to form a joint working group to ease concerns over its purchase of the Russian S-400 missile systems, but Ankara still hasn't received word from the U.S. on the matter.

Currently, China and India are the other countries that have struck a deal with the Russians to buy the S-400s. Additionally, Saudi Arabia, Qatar, Algeria, Morocco, Egypt, Vietnam and Iraq have all discussed buying the S-400 missile system from Russia.

Three NATO members – Greece, Slovakia and Bulgaria – are in possession of the S-300 defense systems. In 1998, at a time when Russia's integration into NATO was only whispered about and U.S.-Russia ties were on moderately good terms, Greek Cyprus purchased the Russian S-300 defense systems and intended to install them on the island. However, following Ankara's objections, Greece integrated them on the island of Crete. These systems are now used for NATO drills. In 2015, Israeli forces tested ways of defeating the S-300 missile system located in the Middle East. The Russian S-300 anti-aircraft system was also activated during joint drills between the Greek and Israeli air forces that year.

Meanwhile, Russia will start delivering its S-400 missile defense systems to Turkey in July, the head of Russian state arms exporter Rosoboronexport said Wednesday, according to the Interfax news agency.

"If the Turkish side turns to us with a request to hold consultations, we will be ready to discuss [warplane sales] along with the UAC [United Aircraft Corporation] based on our capabilities," he added.

Defense Minister Hulusi Akar also commented on tensions between the U.S. and Turkey.

Akar said Turkey was unfazed by threats and had a plan B in case the U.S. blocks the F-35 deliveries and terminates the deal.

"We have short-term, medium-term and long-term plans," Akar said, adding that there was no deadlock in the process so far.

The minister said four Turkish pilots were currently carrying out flights and receiving training on the F-35 fighter jets, and two more were preparing to join the training program. He added that 35 to 40 personnel were also in training.

The first two F-35 jets were delivered to Turkey in June 2018, and Turkish pilots started their training at the Luke Air Force Base in Arizona. Turkey received two more jets despite the outcry by U.S. lawmakers. Currently, Turkish pilots continue their training and the jets will be deployed to Malatya air base in Turkey by November.